Spinach - The Truth Content from the guide to life, the universe and everything 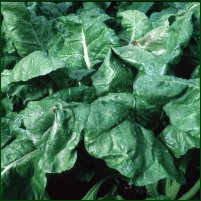 Eat your spinach, it's good for you!

How often has this been directed at a child who is listlessly pushing spinach around their dinner plate? Spinach seems to be undergoing something of an upsurge in popularity, thanks to the current trend for healthy eating. But is it really that good for us? This entry aims to uncover the truth behind that claim.

How Spinach Arrived on Our Dinner Tables

Never eat spinach just before going on the air.
— Dan Rather

Spinach (Spinacia oleracea) is thought to have originated in ancient Persia. In the 7th Century, it arrived in China as a gift from the King of Nepal. It was introduced to Europe between the 11th and 15th Centuries by the Moors, who brought it into Spain. This gave rise to spinach being referred to as 'the Spanish vegetable' in England. Spinach belongs to the plant family Chenopodiaceae.

There are two varieties of spinach – winter and summer – both of which grow well in temperate climates. Currently, The Netherlands and the United States of America are the largest commercial producers of this vegetable.

Interested in growing your own? Summer spinach is actually planted in late winter, but is in season from late spring until midsummer. It grows quickly and should be sown every two weeks from February until the end of March. If all goes well, the first crop will be ready after about nine weeks. The winter variety should be sown in August, and thinned out in autumn. The outer leaves will be ready to eat in early winter and as long as the weather remains mild, the crop will thrive.

Now for the Science

I don't like spinach, and I'm glad I don't, because if I liked it I'd eat it, and I just hate it.
— Clarence Darrow

Spinach is rich in vitamins and other nutrients.

Yes, but what does all that mean?

It means that spinach is packed full of things which are good for you – but is that enough? The reality is that although spinach has a lot going for it, the body cannot absorb all of the minerals in those quantities that are contained within the green leaves. Vitamins are a different matter, but since some of them can be destroyed during cooking, spinach is more nutritious when eaten raw. If you were to follow Popeye's example and eat the canned variety, it would not only have even less goodness but it would taste much worse, too.

Bluto: So you don't like spinach?
Popeye: I hates it.

So what about Popeye, then? During the 1930s Popeye, probably the world's most famous consumer of spinach, was indeed credited with a 33% increase in the consumption of spinach in the USA. These days the Popeye brand of spinach is one of the market leaders.

The mythical strength-giving properties of spinach are, however, mostly credited to a simple mistake concerning the iron content of the vegetable. In 1870, Dr E von Wolf published figures which were accepted until the 1930s, when they were rechecked. This revealed that a decimal point had been placed wrongly and that the real figure was only one tenth of Dr von Wolf's claim.

Despite this, spinach remains a very healthy foodstuff indeed and ongoing research seems to back this up. It is one of the most commonly listed foods among people who are resistant to cancer. Among others it can protect against cancer of the prostate, breast, stomach, colon, lung, skin and cervix. Indeed, consumers of spinach also gain protection against osteoporosis, heart disease and arthritis. Due to its high lutein content, spinach can also help stave off age-related eye defects.

If the health benefits outlined above are not convincing, why not try some tasty spinach for yourself? After all, it was good enough for Catherine de Medici, who brought cooks from her native Florence to France after she married the King, in order that she could still eat her favourite spinach dishes. This is why many spinach dishes are still described as 'à la Florentine'.

A simple way to enjoy the summer variety is to eat it in a salad, partly or wholly substituting the lettuce. The stronger-tasting winter spinach can be layered in lasagne or other baked dishes, as an ingredient in risotto, chopped and mixed with cream or simply steamed.

If You Still Need a Reason Not to Eat It

One man's poison ivy is another man's spinach.
— George Ade

After several paragraphs waxing lyrical on how healthy spinach is, it might be surprising to know that although most foods can be allergenic, spinach is one of the foods most commonly held responsible for an allergic reaction.

Spinach is also classified in the United States as one of the 12 foods in which pesticide residues are most likely to be found. Organic spinach should not present this problem. Oxalates, which can aggravate kidney and gall bladder problems, are also found in spinach, so people with untreated problems in that area should avoid it. It is also worth noting that although spinach does contain calcium, the oxalates also interfere with the body's absorption of the mineral. For anyone taking calcium supplements, several hours should be allowed to elapse before tucking into a meal of spinach.

In addition to the oxalates, spinach also contains purines, which form uric acid and in turn can cause kidney stones and gout. Finally, there are also indications that further substances found in spinach, called goitrogens, could interfere with the function of the thyroid gland. Goitrogens – which impair the uptake of iodine, leading to hypothyroidism – may be rendered inactive by the cooking process, but this has not been established beyond doubt. This means that anyone with thyroid problems can also legitimately say no to spinach.

Nitrates are also commonly found in leafy vegetables, and spinach is no exception. They are found in higher doses in spinach grown in greenhouses and winter spinach generally contains more than the summer type. Spinach picked in the early evening has been shown to have lower levels of nitrates, which decrease once the sunlight has gone. In very high doses, nitrates can lead to blood circulation problems2. In chopped spinach, especially if it is stored in airtight bags or containers, the nitrates can break down to form nitrites. This can lead to methemoglobinemia, where the uptake of oxygen in the blood is adversely affected. In order to avoid these afflictions, spinach should not be reheated once cooked.

It would be a shame to end on a down note about spinach. So, for your delectation, a final word on spinach:

A real friend will tell you when you have spinach stuck in your teeth.3

1You have a big piece of spinach in your front teeth.2The nitrates here are those which derive from manure. Other types of nitrates are given to heart patients to increase the flow of oxygenated blood.3Found on The Friendship Page.