Florence, Italy Content from the guide to life, the universe and everything 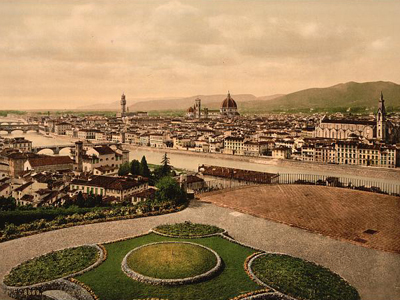 The first settlers of Florence arrived in 10th Century BC but it didn't establish itself as a recognised city until 59BC. It sits along the banks of the Arno river and it has a chequered past which included a brief spell as the capital of Italy from 1865 to 1870, during which time it nearly bankrupted itself. It is mostly known, however, as the birthplace of the Renaissance.

This wonderful city comes as a bit of a surprise to the first time visitor. It is crammed full of wonderful buildings and works of art but these almost seem to be taken for granted by the inhabitants. It is likely that if tourism wasn't so important to the economy many of these treasures would not be preserved.

The first impression of the city is its crowded, polluted, noisy streets. The noise from the traffic is constant, 24 hours a day, and the fumes kicked out by the legions of Lambrettas break every European Community law and a cloud of smog sits over the city for most of the time. The sewerage system is ancient and leaves something to be desired - probably a nose clip and something sweeter smelling is in order. Maybe it is the contrast with this side of the city that makes each of the statues, buildings, bridges, or paintings appear so beautiful.

The city also has the benefit of some wonderful restaurants, startling views and friendly people making any visit enjoyable. However, be prepared to walk long distances as the public transport system is not brilliant and the roads are so crowded it would take just as long to reach your destination. You may also miss out on some of the less well-known museums and piazzas if you are not wandering aimlessly around on foot.

There is so much to see it is easy to try and do too much and ruin your holiday - so plan it well and make sure you leave enough time to enjoy each attraction. A good street map is essential and can be purchased from the Touristos which are local shops selling cigarettes, newspapers, maps and lottery tickets.

As a city of approximately 380,0001 and with millions of visitors each year, it is better to go outside of the usual holiday season. May and September are the best months as the weather is a little cooler and that can be important if you are queueing for two or three hours in the Tuscan sun to get into the Uffizi.

Pisa is also very close to Florence and is well worth a day trip but shop around for a good tour. The two cities have a long-running feud2 which can make the tour of the tower and cathedral entertaining as the tour guides snipe constantly about how much nicer Pisa is.

These gardens lie directly behind the Pitti Palace and were created for the Medici when they moved in during 1550. They really are spectacular because of the mixture of art and gardens sitting together, side by side, in harmony.

In 1766 the gardens were opened to the public and in 1992 a small entrance fee was introduced but this is so small as to be negligible. It is a haven of peace and quiet in a very noisy city and the views over Florence and the Tuscan countryside are breathtaking.

The gardens were originally designed by Niccolò Pericoli but after his death a variety of people had a hand in completing the gardens including Davide Fortini, Giorgio Vasari and Bartolomeo Ammannati. Despite this, the original design was followed and the gardens have pretty much remained the same ever since.

The entrance to the gardens leads directly to the amphitheatre with the fountain designed by Giambologna. This was where the first ever opera performance was held and it is quite an impressive sight.

Other attractions in the gardens are:

The tourist guide which can be purchased cheaply at the entrance has a map in it but to be honest you will see more by wandering aimlessly around. There are few signposts in the gardens so it is easy to get lost, and there is nowhere to purchase drinks or food so it is important to remember to take your own.

The Ponte Vecchio was the only bridge across the Arno until 1218. Over the years several more were built but with the exception of the Ponte Vecchio, all of them were blown up by the Germans in 1944. The current bridge was built in 1345 and survived the 1966 floods. The corridor, built in 1565 by Vasari, was created when the Medici moved from Palazzo Vecchio to Palazzo Pitti so they would not have contact with the people. In 1593 Ferdinand I decreed that only goldsmiths shops were allowed on the Ponte Vecchio which is still the case today. The gold tends to be gaudy and brash and priced for tourists. It is always full of tourists which makes it cramped and unpleasant. It also has a reputation for drugs trade at night.

The Dominican religious order arrived in Florence in the 13th Century when the founder of their order was still living. At the time there was a lot of flamboyant building work being undertaken in the city but nothing to compare to the Santa Maria Novella. The church was designed by Dominican Friars Sistus and Ristoro, to be the symbol of the Dominican religion in the city. Building began in 1278 and is an outstanding gothic masterpiece. Construction was not completed until the second half of the 14th Century, by Fra Jacopo Talenti. In 1288 many houses were demolished to make room for a large open square outside the church. This was a first in Florence as until then churches were not surrounded by open spaces. Talenti did not complete his work and in 1470 Leon Battista Alberti designed and completed the marble façade, adding the volutes to hide the roofs over the side chapels.

Architecturally this is one of the most important buildings in Tuscany and many of the chapels were named after the patrons who had enough money to pay for them to be completed. The façade of the church has been created in black, pink and white marble and incorporates billowing sails which were the symbol of Alberti's patron, Giovanni Rucellai, and ostrich feathers which were the symbol of the Medicis.

The cloisters form a museum which contains many religious artefacts. The Green cloister gets its name from the green tinge to Uccello's Noah and the Flood frescos. Ironically these were damaged in the 1966 floods which destroyed many Florentine treasures. The Strozzi Chapel is dedicated to St Thomas Aquinas and is decorated with frescos painted by Nardo di Cione and his brother Andrea Orcagna, between 1351 and 1357. They were inspired by Dante's epic poem, The Divine Comedy, and are called 'Paradiso e Inferno', and Dante himself appears in The Last Judgement behind the altar. Also represented are members of the Strozzi family. The Tornabuoni Chapel contains Ghirlandaio's fresco cycle of The Life of St John the Baptist. This was painted in 1485 in a contemporary style and depicts many Florentine aristocrats. Opposite is his other masterpiece, The Life of the Virgin. The Spanish Chapel was used by the Spanish courtiers of Eleonora of Toledo, the wife of Cosimo I. It contains very dramatic frescos based on the theme of salvation and damnation and in the fresco Triumph of the Doctrine (circa 1365) by Andrea da Firenze, the dogs of God are sent to round up lost sheep into the fold of the church. The Filippo Strozzi Chapel contains Filippino Lippi's dramatic frescos showing St John raising Drusiana from the dead and St Philip slaying a dragon. Boccaccio set the beginning of The Decameron in this chapel.

Inside, the church is vast and has been designed to look even longer because of the clever spacing of the columns. On the left hand side is a fresco of the Trinity (circa 1428). By Masaccio, this is one of the earliest paintings to demonstrate the mastery of perspective and portraiture. The figures in the picture form a triangle symbolising the Holy Trinity. The viewer's eye is drawn upwards to the figures of Christ and God the Father at the apex. The Virgin and St John are depicted as real people rather than idealised figures and, at the bottom, Lorenzo Lenzi, Masaccio's patron, kneels opposite his wife.

The traffic around Florence's railway station is horrendous, and trying to cross the roads to get to the Santa Maria Novella quickly becomes a lesson in survival so it is best to seek out the underpasses where you can find many a tourist sheltering from the predatory buses and scooters above. Walking from the railway station you are first greeted by the rear end of the Santa Maria Novella and have to walk along a busy road with a narrow path and an unremarkable grimy stone wall along one side. At the end of the wall you come across a large open area, in the centre of which, surrounded by resting tourists and pigeons is a fountain. As you walk into this open area, you become aware of something behind you and looking back over your shoulder you see the Santa Maria Novella's impressive black and white marble façade for the first time.

During 1999, there were big signs indicating that it was being restored as part of a millennium restoration project which meant that the church itself was closed to visitors. The museum however was still open. Sitting in the peaceful Green cloister is a welcome relief from the hustle and noise of the Florence streets outside. The damage from the 1966 floods can quite clearly be seen on the frescos of Noah and the Flood, and you can't help but wonder what they must have looked like before. The frescos in the Spanish Chapel are breathtaking, covering every square inch of wall and ceiling with vivid colours and the dramatic depiction of salvation and damnation.

The museum, however, is a little disappointing, with a relatively small collection of holy artefacts, and a few slightly strange exhibits such as a woodworm-riddled pair of busts.