Gout - The Affliction of Kings Content from the guide to life, the universe and everything 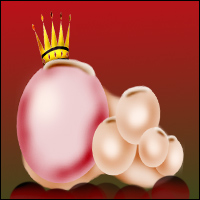 I used to associate gout with the ankles of a degenerate great-grandfather; I didn't realise it could also afflict the wrists of the virtuous. Now I know better.

The above quote is from Muddling Through in Madagascar by the Irish travel writer Dervla Murphy (John Murray, 1985) and refers to the agony she suffered after drinking the local home-made brew.

Gout has been recognised as a disease for many millennia and was mentioned by the Ancient Greek physician Hippocrates almost 2500 years ago. It was considered to be a disease of over-indulgence in food and alcohol, as it mostly afflicted the wealthy.

In the Middle Ages it was described as a disease of the overweight, wealthy and middle-aged man. An English physician by the name of Thomas Sydenham said of gout in 1683:

Gouty patients are, generally, either old men, or men who have so worn themselves out in youth as to have brought on a premature old age - of such dissolute habits none being more common than the premature and excessive indulgence in venery, and the like exhausting passions.

Sydenham also provides us with the first clear documentation of gout symptoms:

The victim goes to bed and sleeps in good health. About two o'clock in the morning he is awakened by a severe pain in the great toe; more rarely in the heel, ankle or instep. The pain is like that of a dislocation, and yet parts feel as if cold water were poured over them. Then follows chills and shivers, and a little fever... The night is passed in torture, sleeplessness, turning the part affected, and perpetual change of posture; the tossing about of body being as incessant as the pain of the tortured joint, and being worse as the fit comes on...

Advances in medicine and science have brought with them a better understanding of the physiology behind this condition, making it easier to control. Secondary (or symptomatic) gout is the result of a systemic1 condition called hyperuricaemia, and is a form of arthritis. When uric acid builds up in the blood, it sometimes forms sharp crystals which settle in the joints, usually the big toe. This turns the joint into a large hot red swelling, causing excruciating agony and irreversibly damaging the joint.

Acquiring hyperuricaemia is a process beginning with the metabolism of purines. These are nitrogen-containing compounds. Purines can be divided into two types: Endogenous purines are made in the body's cells as a byproduct of our metabolism. Exogenous purines are obtained from foods. Most mammals (except humans, unfortunately for us) possess an enzyme called uricase. This metabolises (breaks down) purines to a soluble product called allantoin. In humans (devoid of uricase) purine is metabolised in the liver into uric acid. Under normal circumstances, uric acid dissolves in the blood, is picked up in the kidneys and passes inoffensively out of the body in urine. Uric acid will, however, build up in the body's tissues if not adequately eliminated.

Purines are found in many foods, especially offal (organ meats such as heart and liver), yeast, dried beans and peas, and some seafood (including herring, mackerel and sardines). Other foods with significant purine content are lentils, spinach, tomatoes, beer and wine. Purines also increase lactate production which will compete with uric acid for excretion, compounding the build-up even further.

Uric acid can build up in the blood for several reasons by using two mechanisms:

Gout is usually a hereditary condition common in men. Unfortunately, it occurs most often in overweight men over 30 who drink beer and wine. However post-menopausal women and even children have been known to suffer from this condition.

Lead toxicity (causing saturnine gout), a high niacin intake, kidney disease, and some autoimmune conditions can predispose a person to gout. Gout is also listed as a possible side effect of certain medications, including diuretics, aspirin, cyclosporine2, and levodopa3 as well as various therapies, including pancreatic enzyme replacement therapy. Gout may even arise as a symptomatic response to an illness such as cancer.

Gout attacks in the chronic sufferer can be triggered by a bewildering array of events. Stress, upset or anger can bring on an attack. Binge eating or drinking will bring on an attack, as will a sudden or crash diet. A stubbed toe or twisted ankle can bring on a gout attack as well, and a damaged or stressed joint will succumb to an attack repeatedly.

If seen by a health professional during an acute attack, you may (if you can bear it) have synovial fluid drawn from the joint for crystal and bacterial analysis, the joint may be X-Rayed and you may have blood drawn. If you are not having an acute attack, blood should be drawn and an X-Ray may be taken as well. High uric acid serum levels are not always evident during a gout attack (flare-up), presumably because the uric acid is concentrated in the crystals in the joint by then.

There are other conditions sometimes mistaken for gout. The most common culprit is pseudogout or hypercalcaemia. This is a similar affliction where the crystals are not formed by uric acid but by calcium. Other conditions that must be ruled out at diagnosis include septic and rheumatoid arthritis.

Nearly 90 percent of gout sufferers will experience some degree of kidney dysfunction as a result. Gout sufferers are also at greater risk of developing kidney stones, high blood pressure, kidney disease, diabetes mellitus, high levels of triglycerides, and atherosclerosis or hardening of the arteries. In chronically recurrent and untreated gout, some crystals clustered in tophi may actually burst through, often from the skin around the cartilage of the ear (this is rare these days with the advent of good diagnostic skills). Painful arthritic joints and a degree of disability are a real long-term risk of recurring gout.

It really is best to address gout as soon as it is diagnosed, and there are several ways to do this.

Despite concerns over the efficacy and safety of herbs and plants as medication, there are many people of the persuasion that these methods do work and a global industry dedicated to providing them with the means to try.

Proven herbs and plant extracts include bromelain, a proteolytic enzyme extracted from pineapples. This is usually prescribed in conjunction with quercetin (found in apples and other fruit) which has an action on the crystals, helping to redissolve them back into the blood serum. Cherries and blueberries contain anthocyanidins that increase collagen integrity and decrease inflammation and pain as well. Folic acid inhibits xanthine oxidase (required for uric acid production). Vitamin C, however, is controversial as it is reputed to lower serum uric acid at 8g per day for many or raise it for a small subset of people. As with any treatment that hopes to help eliminate uric acid, a healthy consumption of water is absolutely essential.

If you or someone you care for has had an attack of gout, it is crucial to receive the correct diagnosis initially and then to ensure periodic follow-up including blood analysis. Tests should also check for blood lipids and kidney function to keep track of the ongoing effect on the body.

The one method of control, advocated by both4 medical doctors and alternate practitioners, as the most important aspect of daily gout management is the diet. While drugs and herbs can help, they do not address the long-term potential for joint damage, kidney damage, coronary heart disease and other long term effects of gout. It is only the control of uric acid levels in the blood that will help alleviate this. There are three equally urgent aspects to this.

Excretion is essential and for this to take place properly, hydration is necessary. Whether taking medication, herbs or nothing, it is very important to drink the correct amount of water, enough to flush the kidneys and keep uric acid moving through the urine.

It is essential to maintain a healthy weight and to avoid crash dieting or 'binge' eating (or drinking) which can flood the blood with uric acid. Aerobic exercise, such as walking and swimming, is an important part of the health maintenance strategy as it helps to keep joints flexible, the metabolic rate high and the weight down.

Garbage In, Garbage Out

Keeping the obvious for last, it is useful to remember the adage 'garbage in, garbage out'. High purine foods will cause havoc and should be avoided to avert a gout attack. Depending on the severity of the condition, you may be able to indulge in medium purine foods such as lentils, spinach and mushrooms occasionally. Alcohol, sadly, is your poison as it is a diuretic and causes dehydration: the opposite of the goal in managing gout and keeping uric acid flowing out through the urine. Beer and wine are high in purine, another reason to abstain.

A healthy diet concentrates on complex carbohydrates and a variety of low purine fruits and vegetables with sensible fat and protein intake. Refined carbohydrates (white starches such as bread, rice and pasta) and saturated fats help raise serum levels of uric acid whereas complex carbohydrates, which are less refined, lower it. Some people have benefited from selecting the low purine foods from the 'alkaline' diet to successfully maintain low serum levels of uric acid.

The best advice seems to be to first control the gout and then maintain it with regular blood tests to keep track of serum levels of uric acid, glucose and fats.

If you decide you would like to try any medical or alternative treatment, it is advisable to take the time to research your practitioner and prescribed medication or herb very carefully. It is especially important to read the contraindications before taking any drug.

There are reputable associations for Traditional Chinese Medicine (TCM), acupuncturists, homeopaths, naturopaths and nutritionists. Some of these have medical backgrounds and others have commercial interests attached to their practices. Do be cautious and ask lots of questions before putting your health in the hands of any health professional.

One effect of medicating gout that is too rarely discussed is the continuing damage to joints. Pain relief from the use of anti-inflammatory drugs and herbs is a blessing and a relief; however, it does not remove the crystals from between the joints. The crystals grind and damage the cartilage and bone, damaging the joints beyond repair. It is urgently important, therefore, to address the hyperuricaemia and gout, not only the symptoms which are so uncomfortable.

A patient's greatest asset is information; add to that the ability to ask the right questions and understand the answers - then a successful management strategy can be implemented.