Toothbrushes Content from the guide to life, the universe and everything 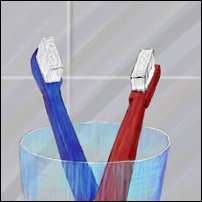 The modern toothbrush plays an important role in oral hygiene. It is primarily used to remove debris (usually food) from the surface of an individual's teeth, though it is also the instrument of choice for applying modern toothpaste and all of the additional benefits that implies.

The largest part of a toothbrush is the handle. The handle is commonly around 10cm long and 1cm thick (1 inch equals 2.5cm). Most toothbrush handles are formed of plastic, and many are inlaid with rubbery material for additional grip. The purpose of the handle is to allow the toothbrush to be easily and intuitively manipulated by the operator's hand.

Extending from the handle, with a common length of 3 - 5cm, is the stem. It is similar in construction to the handle, except that it is usually thinner and is not designed to be gripped. The stem serves to ensure that the handle does not need to enter the user's mouth, thereby keeping the handle and the user's hand clean and dry, and preventing the user from having to taste hand or handle.

On top of the stem sits the head. Most toothbrush heads are about 2.5cm long, 1cm wide, and less than 0.5 cm deep. A large number of bristles (usually white) extend away from the head, parallel with each other. In most designs these are about 1 - 1.5cm in length. They are made of pliable nylon filaments, and are usually categorized as 'soft', 'medium', or 'hard'. It may seem to be more macho to pick 'hard' bristles, but most dentists recommend the 'soft' variety, because the tips of the bristles should actually penetrate the gums slightly during brushing.

Toothpaste is applied to the bristles and the toothbrush's head is inserted, more or less horizontally, into the mouth. One (or several) of the following brushing actions are performed:

The brushing process may be repeated as many times as the user wishes, with or without extra toothpaste. The toothbrush should be cleaned and put away after use. Many dentists recommend the use of mouthwash and dental floss.

Due to market competition and advancing dental technology, many of today's toothbrushes offer unusual special features, such as:

Many toothbrush manufacturers now offer a subscription service via the Internet which automatically delivers new brushes or brush heads at regular intervals, thereby relieving the subscriber of the burden of having to remember when it is time to buy a new one.

1The American Dental Hygienists Association offer their own recommendation for proper brushing technique.