Homebrewing Content from the guide to life, the universe and everything 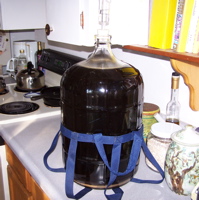 Homebrewing carries with it an image of middle-aged men in baggy jumpers and broken spectacles, hiding in their garden sheds, searching for that elusive drinkable beer, like alchemists looking for gold, but merely producing an undrinkable flat brown liquid.

The truth is slightly different.

Homebrewing has gained in popularity1 since the late 1970s and early 1980s as a reaction to the few major breweries which produced only streamlined beers for the mass market. Since then, micro-brewers (small breweries which typically make a regional beer) and brewpubs (pubs which brew their own beer sold only in the pub) have had their small market share, as has homebrewing.

A few companies and micro-brewers, many of which had been in the homebrew brigade themselves, filled a gap in a niche market and are producing brewing kits that are foolproof. It is now possible to go into a shop on any high street and buy a brewing kit. Often the instructions on these are straightforward and the results taste pretty damn good, too. Buy the equipment, sterilise it, open the can, add some boiling water, stir, add some cold water, add the yeast sachet, leave for a while, drink.

With a little time, patience and care, anyone can do it.

There are several different ways to brew for your own consumption. The first thing that you have to do however is to decide what you want to brew. It's possible to get kits for all ale types from mild to barley wine and for lager of all strengths. You can even get kits for cider and for some spirits. But for this entry we're looking at beer. One thing to remember though, as you start brewing, is that every single ingredient affects the taste. Each sort of malt, every type of hop and each style of yeast can change how the brew turns out.

The method you chose should depend on your skill and knowledge. There really is no point taking on a full mash brew if you have no idea what a mash is.

This is the easiest way of brewing beer. You can buy these in high street shops with the names of reputable breweries plastered on the front. They are designed to mimic the beers that you can buy in the pub and it's hard to mess them up. There are different types of kits available, just avoid the 'Bag on the Wall' types at all costs.

This is the second step along the road to becoming a garden shed alcoholic. Similar in a way to the kits, but instead of buying all the ingredients together with a recipe, you'll need to find a recipe, then buy the ingredients separately. The two methods don't sound too different, but the half mash does allow for a far greater scope of beer. The malt is still bought in a can, but the hops are bought separately along with the yeast. This allows the homebrewer with some degree of skill to tweak brews to their own tastes and particular needs.

This should only be attempted by those who really know what they're doing. With full mash brewing you start from scratch. You do everything, including extracting the malt from the grain. Good luck, you'll need it. You'll buy every ingredient in its raw form and you'll end up with a beer of your own design and manufacture. The satisfaction gained is immeasurable, but so's the failure.

Going to a Brewery

This is really only for those who can afford it, but a number of the micro-breweries in England will let you come in and use their equipment, for a price. (Okay, so strictly speaking this isn't homebrew.) Most of them will even work with you through the brew, helping, encouraging and suggesting. Breweries are also a good place to go for advice about your homebrew, but they do tend to look down on the pure kit brewer.

The equipment you are likely to use differs on the level of brewing you decide upon. At the (very) low end all you need is a kettle and a measuring jug. At the high end, well, it gets expensive. All the equipment and advice that you could want for brewing at home can be gained from a homebrew shop or from one of various brewing websites. Here are some tips from some Researchers' own experiences.

Leave it alone for two weeks. Do not disturb under any circumstances.

When the fermentation is complete it is ready for bottling.

Thoroughly sterilise the bottles and syphoning kit and rinse. Incidentally, this entry makes no apologies about the fact that it constantly goes on about sterilising; it is most important.

Put one teaspoon of sugar into each bottle. This will promote secondary fermentation, and give the beer a little sparkle and fizz. Alternatively, the sugar (or priming malt) could be added all at once before fermentation, this will make 3/4 cup sugar (or one and 1/4 malt extract) per 5 gallons. Carefully, making sure that the sediment at the bottom of the brewbin is not disturbed, syphon the beer into the bottles. Close tightly and shake to dissolve the sugar if added at this stage. Place the bottles in a dark, cool place for two weeks or longer, to settle, just for as long as you can feasibly keep your hands off it.

When the beer is bright and clear, it is ready for drinking. Consider, however, that some beers, such as stout or certain wheat beers, that will never get bright or clear. Just drink it anyway. Excitedly open the bottle and decant into a large jug or straight into your beer glass. The sediment2 that will have formed at the bottom of the bottle is a matter of taste; while some beer drinkers are take extra effort to drink it along with the beer, others are take care not to disturb the sediment.

Pour into a glass or mug and quietly get drunk, but don't forget to save some for your friends, too.

Now is the time to start all over again!

Sterilise thoroughly the brewbin and spatula....

Most helpful tips could be taken from the book The New Complete Joy of Home Brewing by Charlie Papazian which is an excellent reference.

1At least in US and UK, and among some ex-pat communities residing in strictly Muslim, 'dry' countries such as Saudia Arabia and Kuwait. Apparently homebrewing isn't common practice in Germany, though.2Spent yeast, which is one of the best sources of Vitamin B on the planet and an excellent prevention for hangovers.