Nature's Ingenuity at Camouflage Content from the guide to life, the universe and everything 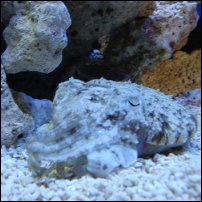 Nature, thanks to millions of years of evolution, has come up with some ingenious methods of camouflage in zoology. Some creatures have evolved to match their surroundings, like the stick insect. Others can manipulate their skin colour to 'blend in'. This brilliant advantage can be used for protection, or stealth when stalking prey. There are some which have unchanging colour but when they hide among similarly-hued stuff like sea grasses they become indistinguishable.

In the animal kingdom it's usually the male who makes himself more attractive to woo a mate. The female of the species is less strikingly-coloured so more likely to be able to blend in with the surroundings while she is broody or guarding young.

Dolphins, some fish and birds like penguins have a sort of camouflage that is called countershading. They are darker on the top part, so from above they blend in with the darker waters below them. Their underbelly is lighter, so from beneath (imagine you are a shark seeking prey), they seem to blend in with the sky, confusing said shark.

This Entry will look at some of the more striking examples of camouflage:

Perhaps the king of camouflage is the mimic octopus (Thaumoctopus mimicus), which has done such a good job of hiding itself from the world that the creature itself wasn't discovered until 1998. As well as being able to change colour at will, the mimic octopus can actually impersonate other sea creatures. Its normal colouring is brown with white mottled blotches; when wanting to look like a banded sea snake, however, it changes colour to yellow and black stripes, then extends two arms either side of its body while tucking the others underneath, giving the overall impression of a large snake. Other creatures the mimic octopus copies the characteristics of are the lion fish and the flat sole fish.

Having studied many octopus species in the wild, I am never surprised by the colour and shape-change capacities of these animals. However, this animal stood out as it was the only one we've encountered that goes beyond camouflage to take on the guise of dangerous animals.
– Mark Norman of the Melbourne Museum in Australia.

Possibly the most famous quick-change artist is the fabulous chameleon, which is a member of the lizard family Chamæleonidae, suborder iguania. Their uncanny ability to change skin colour and tone to blend into the background to escape predators, attract a mate, or just express a mood, is legendary. All other creatures which have some kind of ability to change colour at will are described as chameleon-like, so you could say this animal is the prototype.

There is a remarkable-looking member of the pipefish family called the leafy seadragon (Phycodurus eques). To all intents and purposes it looks just like the clump of seaweed it hides in while it waits for its lunch to come swimming by. This close relative of the majestic seahorse is a native of Australia, and, like its enigmatic cousin, the males also share the astonishing ability to give birth to live young. This volte-face reproduction technique is a unique characteristic unknown throughout the rest of lifeforms on the planet.

What happens is the female produces a few hundred eggs and literally lays them on the male's body. He then fertilises them and they incubate in a special pouch. When the hatchlings are ready to emerge, the father ejects them over several hours, and the offspring lead completely independent lives. Unfortunately leafy seadragons are now endangered (Red List status: NT - Near Threatened) due in part to consumer demand for interesting aquarium specimens1. However, awareness is slowly but surely seeping through into human consciousness thanks in no small part to the efforts of South Australians, who chose the leafy seadragon as their official marine emblem in 1982. A leafy seadragon-themed festival celebrating the marine environment is held by the District Council of Yankalilla, South Australia.

This yellow arachnid (Misumena vatia) has a taste for insects which have a slight advantage in that they have wings and can evade capture by flying off. So this clever spider has evolved a trick of blending in with the shade of the flower it settles on, then waiting for a visiting nectar-seeker. Sir David Attenborough's spectacular wildlife documentary series Life In The Undergrowth featured a clip of a goldenrod crab spider in action. There's no doubt that the camouflage is total, the spider is completely invisible until it moves, which means curtains for the bee.

The moon jellyfish (family: Aurelia) are transparent except for their internal sex organs which are bright, almost fluorescent purple, but these are on display due to the creature being see-through. To protect itself when under threat, the moon jellyfish can change its body from clear to opaque, exactly matching the shade of the water it is swimming through at the time. Swimming jellyfish are known as scyphozoans; the action of moving through the water is achieved as it contracts its body for propulsion, so it is more pulsating than swimming.

There are lots of moon jellyfish on show in a specially-constructed tubular tank at The Deep in Hull, East Yorkshire, UK. The tank is lit with ultraviolet light to enable viewers to see the jellies. Conditions must be just right because the jellies are breeding; on a different floor is another tank full of juvenile jellies.

Golden tortoise beetles (Charidotella sexpunctata bicolour) also known as goldbugs are tiny American beetles which measure about 6mm when fully grown. Goldbugs have a fondness for morning glory2 so they're regarded as somewhat of a pest by gardeners. They are quite striking due to their brilliant gold colouration, but this isn't their natural state. Apparently the gold layer is reduced when the beetle is actively seeking sustenance, so you could say that they lose their shine when under stress. Scientists don't know for sure if this beetle uses the gold 'make-up' to fool predators or attract a mate, because both sexes have the ability to pump up the contrast.

Their main predator is the much bigger ladybird3, and goldbugs have been witnessed changing their gold colour to orange with six4 dark spots to fool the larger insect into thinking they are the same species, thereby avoiding being eaten. When the golden tortoise beetle dies the gold coating dissipates, leaving the outer casing its natural colour – a dull shade of red.

Dead Leaf or a Butterfly?

The Orange oakleaf, Indian oakleaf, or Dead Leaf butterfly (Kallima inachus), has striking, beautiful wings which are shaped like a leaf when closed. When resting, this butterfly brings its wings together revealing the underside, which has darkened veins against a paler base, exactly mimicing a dead leaf.

The British flounder Pleuronectes flesus, a close relative of the flatfish plaice, has a grey-white speckled body which allows it to blend in with the sludge-coloured riverbed. Why then does it need to shovel itself to below that level? It's fair to say this isn't the prettiest fish in the sea, real life is rarely as attractive as that portrayed by the likes of Disney filmmakers. So its habit of burying itself in the silt with only its eyes showing is quite understandable.

This type of sea slug is a remarkably beautiful creature featuring a dazzling array of bright colour and shape, which almost exactly matches the coral among which they live.

Carpet shark family member the tasseled 'wobby' (Eucrossorhinus dasypogon) is a nocturnal feeder inhabiting coral reefs off the coast of northern Australia, Papua New Guinea and Indonesia. The profile of its head is tassled (hence its name) just like the edges of an overthrow. With its mottled sandy colouring it blends in perfectly with the gravelled sea-bottom, rendering it practically invisible. Sweeping the surface with its tail as it glides along like an animated vacuum cleaner creates a wake of silt which further envelopes it, hiding it from unsuspecting prey.

You wouldn't think zebras make use of camouflage because separately they do rather stick out. However, they know there is safety in numbers; they graze together and from a distance it's almost impossible for predators to pinpoint one individual animal from the rest of the herd.

Some animals which don't hibernate during the winter but remain active need to blend in with their snowy surroundings, so what better plan than to grow a new fur coat, in the season's new colour – winter white? Creatures which do this are the collared lemming, Arctic foxes, Mountain hares, long-tailed weasels and stoats (their highly-prized white fur is known as ermine). Then there are three members of the ptarmigan family: rock, white-tailed and willow5, which shed their summer attire and grow new winter plumage of white feathers.

But what if you aren't born endowed with an incredible advantage such as camouflage? Well, you could always develop a technique to fool anything that might fancy serving you up for lunch. For example:

Some sea anemones have sticky pads which they coat with sand and shells from the ocean floor until they achieve the desired effect of blending in perfectly with their surroundings. Then there are certain crabs which decorate their shells with sticky sea anemones!

Be Choosy Where You Park

The pink shrimp Periclimenes holthuisi is a tasty morsel for quite a few marine creatures, and it's not always easy to find a convenient hiding place. This ingenious crustacean searches out a certain anemone, Heteractis magnifica, which resembles human fingers. The stalks are creamy-coloured, but the tips are pink, the exact same shade as the shrimp. So the shrimp can alight on them and be perfectly safe because it's rendered almost totally invisible.

The ingenious hermit crab Dorippe frascone has developed a method of kidnapping an upside-down jellyfish (Cassiopeia xamachana) and carrying it upon their back, as a sort of extra-thick protective cloak. The jellyfish are a favourite meal of the endangered leatherback and sea turtles, but getting too close can result in a nasty sting, so most creatures avoid them. The effect upon the crab's predators is that they give the crab-jellyfish tandem a wide berth, allowing the crab safe passage.

1This is despite Australian marine law forbidding the interference with and/or removal of them from their natural environment.2The flower Convolvulus, nothing to do with the other 'morning glory'.3In the US these are commonly known as ladybugs.4Hence the sexpunctata (six-spot) of the scientific name.5The willow ptarmigan is Alaska's state bird.