Caring For Pet Stick Insects Content from the guide to life, the universe and everything 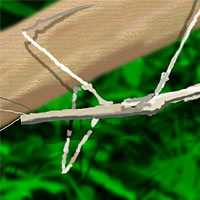 Stick insects1 belong to the Phasmitidae family, order Phasmatodea2. They are usually brown or green in colour and generally elongate3.Their diet consists entirely of leaves (phytophagous) and most species hail from the tropics and subtropics. In the wild, their main defence against predators is passive camouflage, assuming the role of a stick, and many species when alarmed will simply drop off the branch they are on and play dead. Some species have developed other defence mechanisms - some simply fly away, while others have defensive chemical sprays that they release from their thorax. Other defences include colourful wings to confuse predators, or sharp spines to hurt other animals. Another characteristic of stick insects is that they make great pets and are easy to keep4.

Homes For Your Insects

An ideal home for a stick insect is a spacious cage with some sort of grip mesh attached. Vivariums can be bought with aluminium or plastic mesh and these are definitely best. Plastic- or glass-walled tanks are not really suitable unless the insects need ventilation control - most stick insects prefer well-ventilated cages but some need reduced air-flow and this should be checked before you buy the insects. As well as having a climbing surface, the cage should be taller than it is wide so that the stick insects have a lot room to climb and can hang from leaves in order to shed their skin. As for size of a cage, a good guide is that you will be able to house ten Indian Stick Insects (which are more or less average size for a stick insect) with a 400mm x 200mm x 250mm cage, but the more room they get, the happier they will be. Bigger breeds of stick insect such as the Giant Malaysian require bigger cages and more room. To keep the cage clean, the floor should be lined with kitchen roll or shop-bought liners and these should be cleaned/replaced at least every week. It is not necessary or wise to cover the floor in compost, this is a common myth surrounding phasmid care and it holds no grounds. Compost will not improve quality of life for your insects one bit, and more importantly, it encourages the breeding of mites in your cage so it should be avoided.

Some breeds of stick insect such as the Vietnamese Bark also require ventilation control panels to be fitted to the spaces where air can move in and out in the cage. In many books on insect care, the need for a heat mat is also specified. This is not true, all breeds of stick insects do fine in a comfortably warm room, in a space that is preferably away from window sills, due to the greater changes in temperature. However, if you do live in a country with a colder climate, or your house insulation is not too good, then you should check to make sure your stick insects are kept warm at around 20-25°C.

Your stick insects will need their food supply stocking up about every week and it is usually most sensible to clean the cage out whilst doing this. The preferred foodstuff of most stick insects is the bramble leaf, but stick insects also love privet and eucalyptus. Different breeds all have their different tastes as well. Indian stick insects are very partial to ivy leaves and Australian Macleays Spectres prefer eucalyptus leaves, especially when young. To keep these leaves fresh (and the branches upright) the sprigs must be inserted into a piece of ordinary florist's oasis5.

As well as food, your stick insects will need to drink. For small insects such as the Indian, Pink Winged or Vietnamese Bark, this is provided by spraying their leaves with an adjustable mister two or three times a week. For larger insects such as the Giant Malaysian or the New Guinea, a small bowl of water should be provided, just large enough for the insects to have a good drink, but not so large that there is a chance that the stick insects may drown.

All varieties of stick insect will let you handle them and generally like this as long as you are not too rough. Wings, legs and antennae break easily so the utmost care is required when handling them, and it is also a good idea to keep them away from cats or any other large pets that you might have.

Some of the larger species such as the Giant Malaysian may also give the handler a nip on the hand if they are not used to handling, but this is not painful and is quite uncommon.

Flying stick insects, such as the Pink Winged, must be let out to fly once every so often, but only if all doors and windows are shut in your room. Usually, the insect will fly to the other side of the room and land on a wall - you can then collect it and place it gently back in its cage.

Where breeding is concerned, stick insect species fall into two categories – those that are parthenogenetic, meaning that the species consists of females only, which lay unfertilised eggs or eggs requiring no male fertilisation, and those that are not. If you are thinking of purchasing stick insects, you must first find out whether the species that you are buying is parthenogenetic or not. If it is not and you wish to breed your insects then you must make sure you have a male and female.

Breeding your stick insects is easy - if you have a pair of the opposite sex then towards the end of your female's lifespan she will begin to lay eggs. This is where you need specific knowledge of the stick insect's particular species, as no two species lay their eggs in the same way. If you have a pair of Australian Macleays Spectres (Extatosoma tiaratuma) or Thorn-Legged Stick Insects (Epidares nolimetangere) then you will need to put a pot of sand into their cage as they reach the end of their lifespans, as they like to bury their eggs. Pink Winged stick insects lay their eggs on the side of the cage and they stay there until they hatch, whereas Indian stick insects lay theirs all over the place, meaning they have to be sorted out from any droppings in the cage and put into a safe place. So you see, it is very important that you know the particular species you are keeping and find out its egg-laying habits.

A final point about breeding stick insects: in the wild, stick insects lay many more eggs than they expect to hatch, which can make captive breeding a nightmare, as a much higher percentage of eggs are likely to hatch when breeding at home. If you keep all the eggs that your stick insects lay, then you could end up with 50-100 baby stick insects (or more, depending on how many breeding pairs you have and which species you are keeping). As an owner, you must take responsibility and plan ahead. Calculate how many stick insects you want to keep, and put aside a few more than that total for hatching. Now it's up to you to decide what to do with the rest of the eggs; the best thing to do is to donate them to your friends/family or to find a specialist breeder who takes in excess insects. Selling them is not recommended, as it could be against the law, depending on where you are from (in the same way that selling a copied CD is). Discarding them is also potentially a bad solution, as it is irresponsible if they are not native to your local ecosystem.

1Scientifically called Phasmids.2From the Latin Phasmida, meaning ghost.3Though some are broader.4Even children as young as eight can look after the smaller species.5This is the green substance used by florists to keep flowers fresh. You keep it moist and it acts as an artificial soil, retaining moisture for the plant.