Seadragons Content from the guide to life, the universe and everything 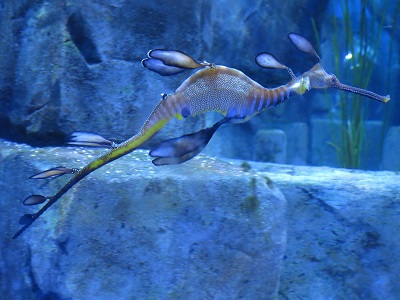 Believe it or not, there were other things happening in 2020 than COVID-19. For example - nonagenarian naturalist Sir David Attenborough held a Q&A session with a bunch of delightfully-excited schoolchildren (via video call, of course), with the resulting honest answers being televised as news clips. A little light relief from the continual coronavirus reports and harrowing statistics. One child asked Attenborough what his favourite creature was. He replied that he didn't have a particular favourite but he was especially fond of a fish called a seadragon, which has appendages that match its surroundings and enable it to blend in. Seadragons live in the Southern Hemisphere so, just in case you've never heard of them, here are some interesting titbits about these remarkable water-dwelling creatures.

Seadragons are native to Australia and are members of the pipefish family. They are a close relative of the majestic seahorse. There are three different types of seadragon, which have varying abilities. The Ruby seadragon (Phyllopteryx dewysea) was only discovered in 2015 and not a lot is known about it. What we do know is that it has a prehensile tail which enables it to grab and hold onto things, just like seahorses can do. The other two seadragons, the Weedy (Common) and the Leafy, can't do this. The Leafy seadragon (Phycodurus eques) has dermal appendages which enable it to look like the clumps of seaweed it hides in, providing perfect camouflage while it waits for its lunch to come swimming by. Weedy seadragons (Phyllopteryx taeniolatus) aren't as elaborate, although their appendages look like kelp leaves, enabling them to blend into the kelp forests which they inhabit. Seadragons have long, slim snouts which vacuum up plankton, roe (fish eggs), fry (young fish) and tiny shrimp. Weedy seadragons can grow up to 45cm (18") - that's about twice the size of an adult Leafy seadragon. Their lifespan is around six years.

Like their enigmatic seahorse cousin, male seadragons also share the astonishing ability to incubate eggs on their bodies, giving birth to live young. This complete role-reversal reproduction technique is a unique characteristic unknown throughout the rest of the lifeforms on Earth. After a sensuous courtship dance, the female produces a few hundred pinkish eggs and deposits them under the male's tail. He releases his sperm to fertilise them and they incubate for up to 60 days. As they hatch, the tiny seadragons immediately swim to the surface to fill their swim bladder with air, then they must quickly learn the balancing skill they will need to maintain buoyancy. The hatchlings will lead completely independent lives (until it's time to find a mate). It is thought that less than 10% of the offspring survive the two years to adulthood, no doubt because there are plenty of other sea creatures who are always on the lookout for a tasty morsel.

Unfortunately the welfare of seadragons gives cause for concern. They are endangered, due in part to consumer demand for interesting aquarium specimens, and to those who create alternative medicines. This is despite Australian marine law forbidding the interference with and/or removal of them from their natural environment. South Australians, who chose the Leafy seadragon as their official marine emblem in 1982, affectionately call them 'Leafies'. A Leafy seadragon-themed festival celebrating the marine environment has been held by the District Council of Yankalilla in South Australia every two years since 2005. The Weedy seadragon is the official marine emblem of the state of Victoria.

Seadragons move with the aid of a swim bladder, which can burst if the creature is removed from the water. So they're best left alone to do what they do best. You can watch one of these fascinating creatures swimming around and enjoying life in a documentary film on YouTube, provided you can access the site.