Seaweed Content from the guide to life, the universe and everything 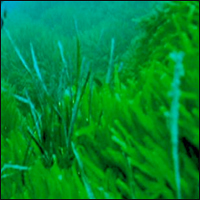 Seaweed is a form of marine algae which collects on beaches, in the hair of swimming tourists and can often be seen hanging inside a certain type of British pub or restaurant; it is thought that the presence of clumps of salty vegetation hanging from the ceiling is demonstrative of the freshness of seafood served within.

Seaweed is often (mistakenly) referred to as a plant, but the red, green and brown algae do not have roots, stems or leaves like plants, but anchor themselves to rocks using structures called 'holdfasts'1, or hapteron. Seaweed that does this is known as benthic, and this particular variety is often the favourite home of many marine-creatures.

Like on land, forests of trees hold many types of life, so under the sea there are vast forests of kelp - another type of benthic seaweed. This variety has been known to sprout up from the sea floor at amazing depths, far from the light of the sun, but still house many creatures.

The security of a house that doesn't really go anywhere except sway a bit in the current, even in the roughest of seas, is the appeal of seaweed as accommodation. Oh, and the large amount of free real estate available to the upwardly mobile mollusc or small fish.

The other most prolific type of seaweeds to be found both at sea and in other watery areas like lakes, rivers and backyard ponds are the phytoplanktons. These 'free-floating' fields of green use a sort of air-filled sac as a flotation aid on the surface of water, becoming mini eco-systems in themselves.

Seaweed, as an algae, is one of planet Earth's most important living organisms2 with over 9000 varieties floating about in the world's oceans. Seaweed actually contributes an amazing amount of life-giving oxygen through the process of photosynthesis; about 75-85% by scientific reckoning. So for all those who thought that trees were the most important thing in producing oxygen for us to breathe, think again. Best not to clean the scum from your pond if you really want to save the planet.

Seaweeds have many more intriguing properties though and the study of seaweed has its very own name, phycology. In fact, the Irish have long been aware of the usefulness of seaweed and, with some 6000 varieties to be found along the Irish coast, have developed the seaweed industry with it being used for many various things - including a fertiliser for different crops. The Irish Seaweed Centre continues to investigate the algae to try and discover how it can be put to further use.

Despite this, the great things about seaweed are often forgotten when its slimy texture when wet causes seaside swimmers to often come running out of the ocean screaming in terror, eyes bulging, repeating over and over,

Something brushed up against my leg!

Seaweeds are in fact edible. Yes, it's true! Many sea-creatures munch on it like cows munch on grass, and lots of world cultures appreciate it for its distinct flavour - a bit like a cross between olives and oysters or mussels. The most common variety of seaweed used in cooking is quite possibly the Japanese nori, a protein-rich green seaweed that when dried is used in many different ways including making the thin sheets you see wrapped around types of sushi. Other Japanese seaweeds for eating include kombu3 and wakame4 and, rather surprisingly, they are all quite delicious.

In Wales, red seaweed called laver is harvested from the coastal regions to create bara lawr, or laver bread. The seaweed is washed and then boiled for five to six hours. After this the laver is minced, then preserved for upwards of a week. The dried seaweed is then mixed with oatmeal (and sometimes bacon) and made into flat round cakes, which are then fried to become a tasty meal5. This practice is also common in Ireland and Scotland - the seaweeds used are green or purple laver, or sloke (a sort of marine spinach).

Seaweed might also be hidden in foods you would otherwise not expect it to be in, as red seaweeds contain various types of hydrocolloids such as agar and carrageenan6. Because of their chemical properties, seaweeds have oft been used as thickeners in a lot of food products like ice cream, milkshake and sauces. Other uses include helping to thicken toothpastes, shampoos, fire-fighting foam and even shoe polish!

Unfortunately, some hydrocolloids such as carrageenan have been shown to be a factor in contributing to gastrointestinal irritations, so should not be eaten by those with a predisposition for stomach ulcers, IBS or even stomach cancer. For this reason seaweed-based thickeners have been reduced from usage in the commercial food industry (although some products still contain them), the substance being replaced with other thickening agents. So if you're worried about pulling a lump of seaweed out of your ice cream nowadays, don't be.

Seaweed can, it is said, be used to predict the weather as it can absorb ambient moisture. Therefore, if dry seaweed hanging up goes limp, it means there's damp in the air. It is interesting to note that the people who say this are often somewhat vague when pressed for further scientific details. Apparently if seaweed is dried then left outside, and you later discover it has become wet, then there's probably been some rain7. One h2g2 Researcher reports:

My experience of seaweed as a weather predictor came from my grandfather who was a treasure house of esoteric trivia. The required seaweed is 'Bladder wrack'. This is the seaweed that generally litters British beaches and has lovely little blister-like bits. I know this isn't particularly eloquent but you get the general picture. Anyway, here's how you beat your local weatherman. Hang said seaweed on a nail outside. If, after a period of hanging there mindlessly, you are able to pop one of the 'blisters' then the weather should be dry. If, on the other hand, you cannot make it pop - it is probably going to rain.

Seaweed-based products such as alginates are often used in wound dressings as the algae contain iodine, and also have properties that apparently draw out impurities. For this reason there have also been claims that some seaweeds can help cure other human ailments including respiratory complaints such as asthma, pneumonia and tuberculosis, some cancers, and when harvested straight from the beach and added to a hot bath, can reportedly assist in relieving the symptoms of conditions such as rheumatism and arthritis. It's not recommended you go and rub yourself with seaweed to find out whether any of these cures actually work, as the stuff you find on most beaches has a distinct and often unappealing aroma.

It's not uncommon to hear of seaweed being involved in seaside drownings. Many swimmers or surfers have come to untimely ends when they have become entwined in strongly anchored seaweed, and some legends surrounding water-based creatures like Jenny Greenteeth might have origins in seaweed-related drownings. In fact Australian Prime Minister Harold Holt is thought to have met just such a fate when swimming off the coast of Victoria in 1967. So, beware the slimy arms of death when swimming at the beach!

If you want to know more about seaweed, visit the following website which has an amazing array of facts about seaweed to immerse yourself in:

1Self-explanatory really.2Yes, aside from tea trees.3Rich in Vitamins A and C.4High in iron and calcium, and proven to be a wonderful anti-coagulant!5Trout is especially nice alongside laver bread.6Or sometimes carrageenin - named after the abundant supply of red seaweed, or 'Irish Moss', that can be found along the Irish coast near the town of Carragheen.7Imagine that!