Alaska, USA Content from the guide to life, the universe and everything 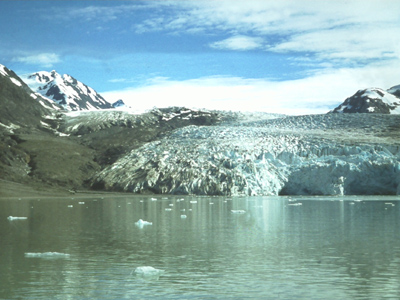 Alaska is the 49th state of the USA, acquired from Russia on 18 October, 1867. Because of its proximity to the North Pole, it encounters the longest summer days, and the shortest winter days, than any other state in the nation1.

Something amazing about Alaska's residents is their insistence that Alaska is 'just like any other place in the world', which it obviously is not. Of course, nobody in Alaska lives in an igloo2, nor do they ride dog sleds to work. However, there are few places left in the world where someone can drive for ten minutes from a bustling metropolis, and end up in the middle of the wilderness surrounded by bears. And as popular media are always quick to point out, moose do in fact walk down the streets of Alaskan towns in winter-time; probably as frequently as you can imagine3.

Many Alaskans own a gun, but never use it. Most residents, particularly the men, middle-aged and older, speak with a southern accent. Girls wear miniskirts in the dead of winter, and everybody starts wearing shorts and tank-tops in April, just as the snow starts to melt (despite the still-freezing temperatures).

Alaska is politically conservative, with exceptions made where recreation is concerned. Marijuana is legal for 'medicinal purposes'.

1In Barrow, Alaska, the sun doesn't set for a whole week around 21 June. Conversely, the sun doesn't rise for a whole week around 21 December.2The igloo is actually an emergency shelter utilised by Canada's indigenous peoples.3One Researcher was walking between campus buildings in his college days, when he heard a crunch. Turning to his left, there was a young moose munching on a willow branch, literally kissing distance away. Frozen to the spot, the Researcher simply stared in awe (and a little fear) for a few seconds, then continued on his way.