Why the Earth Has Seasons Content from the guide to life, the universe and everything 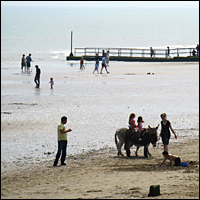 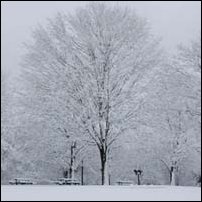 As time goes by, spring turns to summer, summer turns to autumn, autumn turns to winter and eventually winter becomes spring again. The years roll by and the Earth keeps spinning around the Sun.

Why, though, do these different seasons of the year occur? The simple answer is that it's due to the Earth being tilted at an angle of about 23.5° and to its rotation around the Sun.

Proving this at Home

The following experiments should give you a better understanding. You will need:

Imagine your piece of fruit to be the Earth, while the light is your Sun. The stem or core of the fruit represents the Earth's core and the North and South Poles.

Experiment One: Understanding Night and Day

Holding your fruit level with the lamp, notice how the side nearest the lamp is illuminated, while the side further away is in darkness. Try spinning the 'Earth' around its core. Picking a particular point on the surface will allow you to track a town through night and day.

Experiment Two: Earth with No Tilt

Holding the 'Earth' upright with the stem on the top, spin the 'Earth' again. Notice that the whole side of the 'Earth' facing the 'Sun' has sunlight from the 'North Pole' to the 'South Pole'. Again, if you pick a point anywhere on the surface, you will notice that it always receives light at some time during the rotation.

Repeat the experiment as before, but this time tilt the pole of your sphere by about 45° away from or towards the light source. Notice now how despite spinning, the area around one of the poles has sunlight all the time, while the other stays in darkness.

Now, keeping the 'Earth' tilted at the same angle and in the same direction move to the opposite side of your 'Sun'. Spinning it again you will find that the pole that was previously in darkness now has sunlight all the time. Walking around the 'Sun' you will find how this process of change has occurred and if you can imagine yourself as being in a 'town', you will find that the Sun moves higher or lower in the sky.

Geography of the Earth

There are a number of imaginary lines that circle the Earth perpendicular to its axis.

There are four key dates in the year. These occur on 21 March, June, September and December.

The seasons are, of course, reversed in the Southern Hemisphere – autumn in March, winter in June, spring in September and summer in December.

Precession of the Equinox

In the experiment, you kept the Earth's pole pointing in the same direction. To all intents and purposes this is correct. However, it does wobble ever so slightly. This wobble takes 25,765 years for the Earth's pole to trace a full circle. This phenomenon is known as the Precession of the Equinox.

In terms of the seasons it has no real effect. In fact, about the only effect is that Christmas Day (25 December) no longer falls on the Winter Solstice as it used to when it was first initiated.

1An obvious alternative is a ball or even just clench your fist if you can't be bothered to move too far.