Constellations: Pisces 'the Fish' Content from the guide to life, the universe and everything 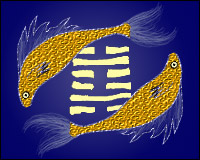 Taking the five loaves and the two fish and looking up to Heaven, Jesus gave thanks and broke the loaves. Then he gave them to his disciples to set before the people. He also divided the two fish among them all. They all ate and were satisfied, and the disciples picked up twelve basketfuls of broken pieces of bread and fish. The number of men who had eaten was five thousand.
- Mark 6:41-44

Pisces shares its borders with Andromeda, Pegasus, Aquarius, Cetus, Aries and Triangulum. Quite a substantial size, Pisces ranks 14th of the modern 88 internationally recognised constellations. It's supposed to represent two fish joined at their tails, but tracing the stars from the asterism known as 'The Circlet' you end up with a snake-like creature bent in the middle. The bend is to the alpha star, Alrescha; this and a few others are below the ecliptic.

Due to its positioning bordering the ecliptic, Pisces is a member of the zodiac and an astrological sign, sometimes playing host to the planets, the Moon and the Sun.

Pisces is distinguishable because it contains the Vernal Equinox, the point where the Sun appears to cross the celestial equator into the northern hemisphere every year. Some people know this date as the first day of Spring. The gradual shift of the Earth on its axis is called precession, a 26,000 year wobble as the Earth rotates, and this has caused the Vernal Equinox to move into Pisces. Between 1500 BC and 500 BC the Vernal Equinox was in Aries.

One story of the origin of Pisces the fish constellation concerns the gods of Olympus themselves. The god Typhon was a fearsome monster who all the other gods fled from when he stormed Mount Olympus. Even the mighty Zeus, who had morphed into the form of a ram, could not escape and he was imprisoned by Typhon. The goddess of love, Aphrodite (Venus) and her son Eros (Cupid) had transformed themselves into fish to swim to safety up the River Nile. Typhon was eventually defeated when Zeus trapped him by dropping Mount Etna on him. Being immortal, the god Typhon could not die, so he remains trapped beneath the earth, erupting when disturbed. The two fish were placed in the night sky as a reminder against complacency.

The scientific star names are simple to understand (if you know your Greek alphabet). For example: the 'alpha' star means that it is the brightest star in that constellation. The next brightest is designated 'beta', etc. Combined with the genitive name, this is known as the 'Bayer designation'. Some stars have proper names as well, for example, alpha Piscium is Alrescha. Other stars are known by their catalogue number.

That's the way it's supposed to work, but sometimes the measurements were a little off, or the stars are variable. In this case, the brightest star of Pisces is the eta designated star which is magnitude +3.6, followed closely by the gamma star, with the next brightest star the rather bizarrely designated omega. Omega is the last letter of the Greek alphabet and as such, the omega star should be the least bright of the whole constellation; in fact some constellations don't even reach an omega designation because there aren't that many stars in them! The iota star ranks behind the omega, then comes omicron, epsilon and theta before the alpha star, Alrescha, finally gets a look-in. The stars in the table are listed in order of brightness.

Meteor showers occur when the Earth passes through the debris path left by the tail of a comet. There are a couple of meteor showers which appear to hail from Pisces, the Gamma Piscids during October, and the Upsilon Piscids of May. Neither of the events have had any spectacular shows recorded, the best ZHR (Zenithal Hourly Rate) so far is eight, with the maximum count recorded over one whole evening (six hours) being 17.

Over 2,000 years ago the Greek philosophers Aristotle and Epicurus argued about whether there were other Earth-like planets orbiting distant suns. There have been several extrasolar planetary systems found in the constellation Pisces up to 2008; the first was discovered in 1998. One star, HD 217107, has at least two planets orbiting it that we know of. HD 3651 is a yellow dwarf 36 light-years distant. In 2003 a brown dwarf (failed star) HD 3651 B and a planet HD 3651 b were discovered in orbit around it.

Figures given in the table below are the length of the planet's orbital period around its parent star, which we know of as a year. The mass of the extrasolar planet is compared to that of Jupiter, our Solar System's largest planet, known by astronomers as the 'Jovian scale'.

Pisces is the 12th sign of the zodiac3 and astrologers today still use dates which are over 2,000 years out of date. So newspaper and magazine columnists say that Pisces covers the dates between 19 February and 20 March. However, currently (2008) the sun occupies Pisces between 15 March and 13 April.

If you believe in such things, the Piscean zodiacal sign has Neptune as its ruling planet, white as its characteristic colour and chrysotile as its lucky jewel. Subjects of Pisces are said to be altruistic, highly sensitive and given to extremes of elation and depression.

According to medieval tradition, the constellation of Pisces was associated by ancient Babylonian or Persian Magi4 with the nation of Israel. This led the German astronomer Johannes Kepler to consider it as the likely location of the Star of Bethlehem.

Pisces Halcyon is a British author, poet and artist.

1Current IAU guidelines use a plus sign (+) for northern constellations and a minus sign (−) for southern ones.2A light year is the distance light travels in one year, roughly 5.88 trillion miles or 9.46 trillion km.3If you look at the ecliptic on a star map the Sun actually passes through 13 constellations, the 12 'star signs' that most astrology devotees know, plus Ophiuchus 'the Serpent Bearer'. Possibly the actual number is considered too unlucky to be considered for an update.4Astronomers or 'wise men'.