Cosmic Trainwrecks Content from the guide to life, the universe and everything 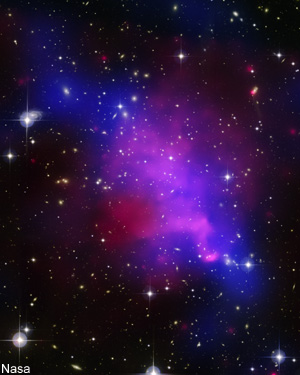 Galaxies can affect each other over vast distances thanks to their gravity. Two (or more) colliding galaxies can take a billion years to merge once they have begun interacting - the ultimate slow dance. Such interactions are called galactic collisions (or mergers); but 'cosmic trainwreck' is the colloquial term preferred by some astronomers, due to the daunting magnitude of the scale and the devastation caused to the stately galaxies. Post-collision galaxies are likely to be elliptical in shape; such galaxies are more common now than the spirals that used to dominate the early Universe. We know this because the Hubble Space Telescope (HST) imaged the deepest picture of the Universe ever taken, pinpointing galaxies that existed up to 13 billion years ago.

While galaxies themselves collide, the individual stars within them (usually) do not, although they can be ejected by the new step-parent galaxy, or end up within the reach of a black hole. The stately pace of a galactic merger means retained stars with planets tend to survive the collision with their systems intact. Take, for example, the alien planet HIP 13044 b that orbits the star HIP 13044. This Fornax constellation star belongs to the 'Helmi stream', which scientists know once formed part of a dwarf galaxy absorbed by our Milky Way Galaxy many millions of years ago.

Some galactic encounters aren't quite cosmic trainwrecks yet. NGC1 3166 and NGC 3169, 60 million light years2 away in the constellation Sextans, look quite neighbourly in this 'Best Images of the Advanced Observing Programme' feature, but they are headed for a fateful encounter at some point in the future.

The HST also provided us with an amazing image of the awesome merger between NGC 6050, IC 1179 and at least one other component, possibly two. The two larger spirals, NGC 6050 and IC 1179, have already linked arms, and appear to have included a smaller galaxy in their dance by tossing it over their heads. IC 1179 looks like it has an arm around another tiny galaxy that could have been much larger, but most of its stars have already been stripped away. Collectively known as Arp 272, the assembled group lies 450 million light years distant in Hercules.

Some galaxies are much larger than others, but the big boys can still be affected by smaller galaxies if they pass too close. The Tadpole Galaxy (Arp 188), a distorted spiral in Draco, provides a good example of such an encounter. A very long time ago, a small galaxy (of which only the core remains) interacted with a larger spiral, and their galactic tugging stretched out a 'tail' of stars, dust and gas that now runs 280,000 light years in length. Observers have likened the effect to the shape of a tadpole, hence the common name of the spectacular object.

If the interacting galaxies have black holes at their cores (and experts now think most have), they will eventually gobble each other up and form one supermassive black hole. NGC 6240 provides a good example of currently-clashing galaxies, 400 million light years away in Ophiuchus. The galaxies' intertwining dance has gone on for a very long time, with the impending collision of their cores preceding the combination of their black holes. The result will be nothing less than catastrophic; some stars will be ejected in the mayhem and others will not survive, dragged across the event horizon. NGC 6240's cores lie so close that their ultimate collision must only lie a few million years in the future, which is not very long in galactic terms.

The scientific community generally accepts that the enigmatic globular cluster Omega Centauri may represent a dwarf galaxy remnant that passed too close to the Milky Way Galaxy many millions of years ago.

A ring galaxy can form following the completed merger of two or more galaxies. Such a scenario is thought to have happened in the case of Hoag's Object (aka PGC 54559), probably over two billion years ago. Named after the US astronomer Arthur Hoag, who discovered it in 1950, Hoag's Object sits above the snake's head asterism3 in Serpens Caput, the most northern of the two portions of Serpens. Hoag's Object possesses a central elliptical core and an outer ring, which could have been the arms of a spiral, now joined. Hoag's Object's radius spans 100,000 light years: the overall effect is rather like a brooch sparkling at 600 million light years distance. It has such a 'wow' factor that it was the most-uploaded image at the Galaxy Zoo forum in 2007. Uncannily, observers can clearly see another ring galaxy through the inner gap of Hoag's Object, which could be millions of light years more distant. Given a ring galaxy's extreme rarity, the odds against this superimposition occurring must have been astronomical, until it happened!

Another ring galaxy is AM 0644-741 in Volans. Rather than having a perfect outer ring like Hoag's Object, AM 0644-741 has the shape of a fried egg, with the yellow core of the once-normal spiral galaxy taking the part of the off-centre yolk.

Polar Ring galaxies have stars, gas and dust orbiting in the opposite direction, or at right angles, to the core of the main galaxy. These can result from matter being pulled from, say, a giant spiral and adopted by a smaller elliptical, or a giant elliptical stealing starstuff from a smaller spiral. It's basically a merry-go-round gone wrong, but the effect can be quite beautiful and even stable, as in the case of the Helix Galaxy.

Galactic cannibalism is what happens when a larger galaxy totally consumes a smaller one. Sometimes there's no remnant of the eaten one left at all, but occasionally obvious pointers to the past feast exist. Take, for example, the giant elliptical galaxy NGC 1316 in Fornax, the galaxy's gargantuan size the result of its gorging on other galaxies for aeons. We know this because elliptical galaxies do not have dust lanes and the interstellar gas which are the realm of spirals, yet NGC 1316 is strewn with both. Case closed, M'Lord.

Galactic cannibalism isn't always a bad thing. Collisions with dwarf galaxies can supply enough fuel to kick-start ageing elliptical galaxies into becoming star-making factories again. The GALEX (Galaxy Evolution Explorer) satellite can detect the blueish glow of young stars less than a billion years old in some ellipticals that should have been well past their sell-by date, having consumed all their gas billions of years ago. An old galaxy's encounter with a smaller, younger one introduces new gas and all the necessary materials required to revitalise the stellar nursery.

The Milky Way and Andromeda Galaxies

The Milky Way and our neighbour the Andromeda Galaxy exist on a collision course: the Andromeda Galaxy hurtles toward us at about 125 km (77 miles) a second. Their interaction, when it finally occurs, will create a titanic clash on a par with the spectacular colliding spiral galaxies known as Arp 271. In April 2002, a Hubble team member played around with some computer graphic software and projected what the future (billion of years into the future, so Don't Panic) collision between the Milky Way and the Andromeda Galaxy might look like. The Einstein Planetarium displayed the resulting image for a time, and disaster junkies can still download this computer-generated graphic of a local cosmic trainwreck of the far future.

1NGC stands for the New General Catalogue, compiled by John Louis Emil Dreyer, the director of the Armagh Observatory from 1882 to 1916.2Motion is a marriage of time and space, so the amount of time light takes to reach us is a measure of the distance. A light year is the distance light travels in one year, roughly 5.88 trillion miles or 9.46 trillion km.3A group of stars which isn't a recognised constellation.