Constellations: Hercules 'the Strongman' Content from the guide to life, the universe and everything 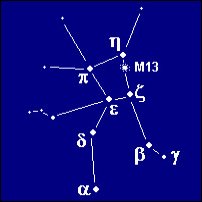 Every passing hour brings the Solar System 43,000 miles closer to Globular Cluster M13 in Hercules – and still there are some misfits who insist that there is no such thing as progress.
- Kurt Vonnegut (1922 - 2007)

Looking in the sky between Vega and Arcturus during a late spring or summer night, one may spot what appears to be, when the stars are joined up in the mind, a rather faint, backwards letter 'K' with a central box. Imagine a child's drawing of a spider: this is Hercules, the fifth-largest of the 88 modern constellations, the main feature being the jaw-dropping Hercules Cluster, some 650 million light years2 distant.

The constellation (Latin name Hercules) is named after a superhero, the demigod Herakles, in Greek mythology. Herakles was the son of the great god Zeus and an earthly queen called Alkmene. This liaison enraged Hera, the goddess wife of Zeus, so she set about to destroy the boy. He survived, and later performed eight heroic acts and accomplished 12 seemingly impossible tasks. At the end of his earthly life he became an immortal god and Zeus placed his image in the sky as a constellation. As if to show how even the mighty sometimes fall, there is an impact crater on the Moon named after Hercules.

Because the star Rasalgethi3 means 'head of the kneeling one' and lies in the southern part, the constellation is often visualised as a man kneeling head first in the sky. The interpretation as Herakles is 2,500 years old, but 5,000 years ago in Babylon this constellation was known as a kneeling man. In that mythology it was not Herakles but Gilgamesh, the main character in Babylonian Genesis. Gilgamesh stood on the head of Ladon the dragon (the constellation Draco) in the north.

The Phoenicians called this constellation Melkarth, after one of their gods (one of the stars, mu Her, is still called Melkarth). The astronomer priests of the Euphrates valley associated Hercules with their sun god.

The scientific star names are simple to understand (if you know your Greek alphabet). For example: 'alpha' means that it is the brightest star in that constellation. The next brightest is designated 'beta', etc. Combined with the genitive name, this is known as the 'Bayer designation' after they were introduced by Johann Bayer in his Uranometria (star atlas). Some stars have proper names as well; for example, alpha Herculis is Rasalgethi.

There are no first-magnitude stars in Hercules. The brightest, Rasalgethi, is a red giant with one of the largest radii known, 400 times that of our Sun. Rasalgethi lies a little bit apart from the rest in the south, so it looks like it belongs in Ophiuchus on many illustrations. It's a variable star so it becomes brighter than Kornephorus, which is normally of a greater magnitude.

Sarin is a double star. You see two stars through a good telescope. However, both are in a very similar direction by a mere coincidence, a line of sight illusion. This is called an optical double star, in contrast to the physical one.

The upper half of the letter 'K' is formed by the stars pi, eta, zeta and epsilon Herculis. This formation, an asterism, is commonly known as the Keystone. The name Keystone comes from the shape of the four inner stars of the asterism which is like the central stone in an door's archway. That is the keystone that locks all the others into place. Entirely by coincidence, +3.14 is the magnitude of pi Herculis.

Globular clusters are almost as old as the Milky Way itself; they can contain millions of stars. When the Messier tables were compiled a very nice globular cluster, M13, was noted in Hercules. M13 is the most well-known globular cluster of all. The number NGC 6205 was assigned to M13 when the NGC was compiled by John Louis Emil Dreyer (the director of the Armagh Observatory from 1882 to 1916).

The 1974 'Arecibo message', which was put together by Frank Drake and Dr Carl Sagan, was transmitted towards M13. The Arecibo message is made up of 1,679 binary digits (almost 205 bytes). It lasts almost three minutes, was transmitted at a frequency of 2380 MHz and sent only once. At the time it was the strongest man-made signal ever broadcast. It will take 25,000 years before the message is picked up, even if there's anyone on the receiving end, and, should they choose to respond, the reply would take another 25,000 years. The whole project obviously wasn't about establishing communication, but more a Kilroy-type equivalent 'we were here' message.

There have been several extrasolar planetary systems found in the constellation Hercules; the first was discovered in 1998. Figures given in the table below are the length of the planet's orbital period around its parent star, which we know of as a year. The mass of the extrasolar planet is compared to that of Jupiter, our Solar System's largest planet, known by astronomers as the 'Jovian scale'. Some exoplanets have been assigned proper names by the IAU. HD 149026 b is also known as Smertrios, which was the name of the god of war in Celtic mythology.

While this article is primarily about the constellation Hercules, the author thought you might like to read about some of the other instances where Hercules (or Herakles) has appeared.

The Hercules beetle (Dynastes hercules) is one of the largest known members of the Scarab family. The ancient Egyptians worshipped  Scarabaeus sacer (what is commonly called a 'dung beetle') as the living embodiment of the god Khepri. They made amulets in the shape of scarabs which they supposed could ward off evil spirits. These were worn as jewellery, and also enclosed within linen strips during the mummification process of Egyptian royalty.

Morpho hercules is a large Brazilian butterfly. Adults boast a wingspan of 120mm.

The myth of Hercules, his legendary strength and heroic activities, has inspired many artists and writers. The word 'Herculean' means to have huge resources when applied to a task, as in: 'He needed Herculean strength to lift the heavy object'.

1Current IAU guidelines use a plus sign (+) for northern constellations and a minus sign (−) for southern ones.2A light year is the distance light travels in one year, roughly 5.88 trillion miles or 9.46 trillion km.3Also known as Ras Algethi.