Constellations: Canes Venatici 'the Hunting Dogs' Content from the guide to life, the universe and everything 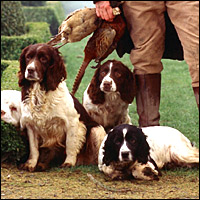 See planets wheeling overhead,
Mysterious and slow,
While morning buckles on his red,
And on the Dachshunds go.
– excerpt from the poem Dachshunds by William Jay Smith

Canes Venatici is a small northern constellation bordered by Ursa Major, Coma Berenices and Boötes. Although faint and therefore hard to detect, Canes Venatici has a wealth of interest for the deep-sky enthusiast, including the stunning Whirlpool Galaxy (M51) and a brilliant globular cluster harbouring over half a million stars.

In the 17th Century, Johannes Hevelius (1611 - 1687), the founder of lunar topography, delineated seven star formations which are included in the 88 internationally recognised modern constellations. Canes Venatici is supposed to represent the dogs Chara and Asterion straining at the leash being held by Boötes2.

Helvelius' other six star formations are: Lacerta, Leo Minor, Lynx, Scutum, Sextans and Vulpecula. These were introduced in the 1690 atlas Firmamentum Sobiescianum, published after his death by his second wife, Elisabeth (1647 - 1693), who was also an astronomer. Known as 'the mother of moon charts', her life was commemorated in the 2006 novel Die Sternjägerin (The Star Huntress) by Eric Walz.

The scientific star names are simple to understand (if you know your Greek alphabet). For example: the designation 'alpha' means the star is the brightest star in that constellation. The next brightest is designated 'beta' etc. Some stars have proper names as well; for example, alpha Canum Venaticorum is Cor Caroli. Others are known by their catalogue numbers or 'Bayer designation'.

Alpha2 Canum Venaticorum, Cor Caroli ('heart of Charles'), is a third magnitude double star and one of the four partners of a little-known asterism, the Great Diamond of Spring. The other three stars forming the diamond shape are: Arcturus (alpha Boötis), Spica (alpha Virginis) and Denebola (beta Leonis).

Cor Caroli is a peculiar star, in that it has a unique spectral classification due to its unique composition: A0pSiEuHg. This reflects its size and mass and some of the chemical elements in its make-up (eg, Si=silicon). Scientists have measured silicon, europium and mercury among Cor Caroli's components - this star is magnetic!

Beta Canum Venaticorum, Chara, is named after the second 'hunting dog'. Sharing the same classification as our Sun, yellow dwarf Chara is a relative neighbour at just 26 light years3 distant. It was announced in 2006 that Chara is the top candidate star in the search for extra-terrestrial life.

We are intentionally biased toward stars that are like the Sun... these are places I'd want to live if God were to put our planet around another star.
- SETI seeker Margaret Turnbull of the NASA Terrestrial Planet Finder mission.

Y Canum Venaticorum is a red giant carbon star which was given the common name La Superba by Italian astronomer and inventor Pietro Angelo Secchi (1818 - 1878).

Although a relatively small constellation, Canes Venatici contains a wealth of NGC4 objects and several of what Charles Messier would have described as 'non-comets'. King Louis XV of France called Messier the 'Comet Ferret' because it was his passion; anything he found which was not a comet (like a galaxy or globular cluster) went in his catalogue as a 'non-comet'. It is ironic Messier is remembered more for his non-comet collection than the 13 comets he discovered!

M51, the Whirlpool Galaxy, is a classic grand spiral galaxy of awesome proportions. It is mind-bogglingly huge, measuring over 60,000 light years across. Its celestial beauty has been imaged by a variety of ground telescopes and space observatories for a grateful audience 31 million light years distant.

M63 has the common name 'Sunflower Galaxy'. It is detectable with a small telescope just 5° north of Cor Caroli. This is also a classic grand design spiral and uncannily the same size as M51.

M106 is unusual in that it has two jets - that look like extra arms - which extend the width of the galaxy. It is one of the nearest examples of a Seyfert galaxy, characterised by having supermassive black holes at their core. This galaxy class is named after its discoverer: US astronomer Carl Seyfert (1911 - 1960).

The New General Catalogue was compiled by John Louis Emil Dreyer, who directed the Armagh Observatory from 1882 to 1916.

The space debris which creates a meteor shower comes from the tail of a comet entering the atmosphere as the Earth crosses the area where the comet passed previously on its own orbit. Imagine a trail of breadcrumbs, or sawdust like that used in hashing. There are no meteor showers connected with this constellation. Wikipedia mentions an associated meteor shower called the Canes Venaticids but the Bad Astronomy website debunks this information. The discussion revealed that US astronomer and author Gary W Kronk started the confusion by inadvertently referring to the Canids as the Canes Venaticids, which was copied. Kronk later corrected his error, but no-one noticed.

1Current IAU guidelines use a plus sign (+) for northern constellations and a minus sign (−) for southern ones.2Despite the fact that Boötes is a herdsman, he apparently employs hunting dogs.3A light year is the distance light travels in one year, roughly 5.88 trillion (short scale, 5.879×1012) miles or 9.46 trillion (short scale, 9.461×1012) kilometres.4New General Catalogue.