Constellations: Octans 'the Octant' Content from the guide to life, the universe and everything 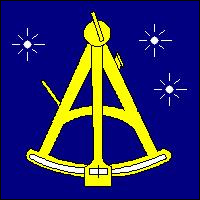 Octans is the southernmost of the southern constellations; it contains the South Celestial Pole, the point in the sky directly above the Earth's South Pole, and is fully visible only from the Earth's Southern Hemisphere. Indeed, a part of it is in the sky at all times from any point in the Southern Hemisphere. It is bordered by Indus, Pavo, Apus, Chamæleon, Mensa, Hydrus and Tucana. The constellation features no bright stars, is the source of no known meteor showers and has very few points of interest other than the South Celestial Pole.

Octans is so far south that it is in a region of the sky never seen by the ancient Greeks and Babylonians, who devised the ancient constellations, so it has no mythological associations.

The word Octans means an octant, which is a scientific instrument for measuring how far apart objects are in the sky. The constellation was devised by the 18th Century French astronomer Nicolas Louis de Lacaille (1713 - 1762), who worked in Paris but made a trip to the Cape of Good Hope in South Africa to chart the southern skies. Lacaille imagined 15 new constellations, many of them with names based on scientific instruments; among them were the telescope, the microscope, the octant, the reticle (part of a telescope) and the set square. Fourteen of Lacaille's constellations were chosen by the International Astronomical Union (IAU) in 1922 to be among the official list of 88 constellations which we now use. Lacaille called the constellation 'l'Octans de Reflexion', literally the Reflecting Octant, but the name was later simplified to Octans.

The stars in the sky are so far away that they appear to be fixed in position. Because the Earth rotates on its axis roughly once a day1, the stars appear to move around the Earth. The points in the sky directly above the Earth's north and south poles appear to be fixed and all the stars in the sky rotate around these points in circles. They are known as the North and South Celestial Poles. These poles don't rise or set like the sun but are there in the sky at all times – we just can't see them half the time because the sunlight obscures them.

The North Celestial Pole is obvious because there is a star right next to it – Polaris (or alpha Ursae Minoris) is not a very bright star, but it is easy enough to find. Once found, if you imagine a line from Polaris straight down to the horizon, then that point on the horizon is due north. This means that the location of Polaris is very important if you want to navigate at night, particularly at sea. In addition, the height of Polaris above the horizon (in degrees) is the same as your latitude, so it doesn't just tell you which way you are pointing, it also indicates where you are.

In the Southern Hemisphere, there is no bright star beside the South Celestial Pole. The star Sigma Octantis lies as close to the pole as Polaris does to the north one, earning it the name Polaris Australis, but it is a totally insignificant star of 5th magnitude, which you won't be able to find unless you really know your star patterns. It's therefore impractical as an aid to finding the pole.

How to Find the South Celestial Pole

The easiest way to find the South Celestial Pole relies on you being able to find Crux, the Southern Cross, and the two stars Alpha and Beta Centauri. The Southern Cross is easy enough to recognise, as it appears on the flags of Australia and New Zealand. Imagine a line from the top of the cross southward through the bottom of the cross and extended by four times the length of the cross. Now imagine a second line joining Alpha to Beta Centauri. Finally, bisect this line with a third line and extend this southwards as well. This line should intersect the line from Crux at a point which is reasonably close to the South Celestial Pole (it's about 2.5 degrees out, but that's close enough for most purposes).

An octant is an instrument which allows an observer to look at two different views of the heavens at the same time, placed side by side. One view is directly through the instrument while the other travels through a pair of mirrors. One of these mirrors is fixed and one rotates. By measuring the amount the mirror needs to be turned to bring the two views together, the octant measures the angular separation between the two objects being observed.

For example, in the days before satellite navigation systems, the most accurate way of determining the location of a ship out of sight of land was to measure the height of the sun above the horizon at noon. This value could be used to calculate the latitude of the ship. A sailor could look through his octant and see an image of the sun and an image of the horizon. All he had to do was turn the moving arm of the octant until the sun appeared to be resting on the horizon; he could then read off the angle from the scale on the octant. Tables were then consulted to produce the desired latitude.

The instrument could also be used at night for measuring the angular separation between stars, making it very useful for astronomers plotting out new constellations. It is for this reason that Lacaille chose to commemorate the instrument in the sky. In the Northern Hemisphere, measuring the angular separation between the North Star, marking the North Celestial Pole, and the horizon gives a more direct value for the latitude. Lacaille chose to position his Octans constellation at the South Celestial Pole, although lacking a bright pole star it could not be used for measurements of latitude.

The octant appears to have been invented in about 1730 independently by two people: Thomas Godfrey from Philadelphia and John Hadley from England. Hadley took out a British patent on the device in 1734. It was superseded by the more elaborate 'reflecting sextant' in 1755; this had the advantage that it could measure angles greater than 90 degrees, but many octants continued to be used right up to the 20th Century because they were lighter and easier to carry.

The octant gets its name from geometry: in that branch of mathematics, an 'octant' is an eighth of a circle and the instrument is basically this shape.

The brightest star in Octans is Nu Octantis (ν Oct) which is 4th magnitude. This is pretty dim.

Even dimmer is the pale yellow Sigma Octantis (σ Oct). At a magnitude of +5.47, this is barely visible. Nevertheless, this star has a proper name: Polaris Australis. This is because it is the visible star which is closest to the south celestial pole. It lies about one degree from the pole, which is as close as the northern Polaris is to the northern pole.

Deep space objects are things worth looking at outside our solar system. They generally include such things as nebulas, star clusters and galaxies. One great source of such objects is the New General Catalogue (NGC), compiled by Dreyer at Armagh Observatory and based on the observations of William Herschel.

Octans does not have many interesting deep space objects. Melotte 227, an open cluster, is probably the only thing of interest for small telescope owners. The few objects listed in the NGC are mainly faint and difficult to see. Brightest are the overlapping pair of galaxies NGC 6438 and NGC 6438A, but you'll need a big telescope to see them. Galaxy NGC 2573 is even harder to see, but it bears the distinction of being the NGC object closest to the pole, and was given the name 'Nebula Polarissima Australis' by Herschel.

Extrasolar planets are ones outside our solar system, orbiting other stars. They are a hot topic for astronomers, with new ones being discovered all the time. Because the distances involved are so huge, the planets have to be detected by indirect means, such as by analysing the effect their gravity has on their parent star.

So far, four planets have been discovered within the constellation of Octans:

Astronomers would like to find a planet in the 'habitable zone', at the right distance from the parent star for Earth-like life to be possible. The first of these planets orbits the star at a distance of only about five million kilometres. At that distance, our Sun would shine 860 times as bright as it does on Earth, and the parent star of this planet is hotter than our Sun, so we can rule out any possibility of life in such a furnace.

The planet HD 142022 A b is very large – five times the mass of Jupiter  – and it orbits the star much further out than Earth does the Sun, so it is likely to be an inhospitable place. Once again, we can discount a possible location for Earth-like life.

Nu Octantis b is a gas giant orbiting within a habitable zone of 418 days at 1.2 AU.

Mu2 Octantis b is a superjovian world orbiting a sun-like star, taking 4,100 Earth days to complete one year.

The very first octant seems to have been invented by Sir Isaac Newton in about 1699; he called it the 'reflecting quadrant' because it served the same function as the much bigger and more cumbersome quadrant. Newton, unfortunately, did not like to tell people about his inventions, because he hated to be questioned, taking any sort of enquiry as a criticism. As a result, his invention wasn't made public until 1742, long after his death. By this time, the two other people mentioned above, Hadley and Godfrey, had independently invented what was basically the same device.