Things to do in Paris, France Content from the guide to life, the universe and everything

Driving a Car in Paris

If you're getting bored with sissy sports like pit bull arm-wrestling or chainsaw juggling, you may consider having a go at driving in Paris for a new thrill. You'll only need a car, a crash helmet and some good insurance.

Get in the car, fasten your helmet1, don't tell your insurance company you're planning to drive there (it would surely cancel your policy), and wish yourself good luck...

Some tricks for survival:

Try not to look like a foreigner. You can do this by following these easy steps:

After a few days of practice, you should have accumulated enough experience to try to accomplish the one major feat which will earn you the respect of your elders and (probably) a major coronary attack: crossing the Place de l'Arc du Triomphe at 6pm.

The Place de l'Arc du Triomphe vaguely resembles a merry-go-round, except that it's not merry and seldom goes round. It has 12 entries and as many exits, locally called 'escape routes'. Don't worry if you take an exit which is not the one you intended to take in the first place: you should just be happy to have reached one of them alive. Some people have been seen leaving by the exit they wanted to, but not by reliable witnesses.

Driving on Two Wheels in Paris

Ah Paris, a city where everyone is - or has been - on two wheels! Where they are polite and make room for bikers, in spite of the amazingly barking-mad traffic!

The theory in Paris is that you shouldn't knock someone off a bicycle or a scooter as it may be your mother or your boss. Round the infamous Peripherique the gaps between the lanes are so big that most bikers do at least twice the speed of other moving traffic. Nobody cares: run red lights as long as nobody else is using them, split lanes as much as you like, overtake on a solid white line... it's loads of fun.

Warning! If a gendarme (policeman) signals you to pull over, even one on foot, do so. They have been known to pull guns on recalcitrant drivers... but this is presumably only shocking to English people.

The Metro is the Parisian underground train system. It's dead easy to use: just wander into a station (there's one near the Bois De Boulogne, even), approach the ticket window and say: 'Jam er ayz un carnay duh tick ay, see voo play'. This is the only piece of French you ever need to know in Paris. The ticket operator will take your money and give you ten tickets that will enable you to take any overground or underground train within Paris.

As with any underground system, get a map, but don't study it too loudly or obviously or else people will know you're a tourist. (A t-shirt marked 'Yale University' or 'Oxford' is a similarly bad giveaway.) Metro trains are identified by the destinations at the two ends of the route, and the maps are colour-coded with pretty pictures; unlike many city systems, Metro trains are reliable, on time, and always stop at the station. Which is nice.

Another nice thing about the Metro is it goes everywhere, and it's set up so you never have to make more than two line changes. Just make sure you don't stand there like a chump waiting for the doors to open - you either need to push a button to open them, or some trains have chrome-plated handles which you to turn clockwise to unlock the doors once the train has stopped. It can be embarrassing if you forget this, especially when showing your mother round the city.

Do not, we repeat do not use the Paris Metro at half past eight on a Monday morning, especially with heavy luggage. There are some very unpleasant people around at that time. However if you have a Scottish accent you can use it loudly - particularly if you sound drunk like Rab C Nesbitt - to scare the hell out of the French in the carriage. One Researcher found that even doing this in jest for some mates could clear a Metro carriage. 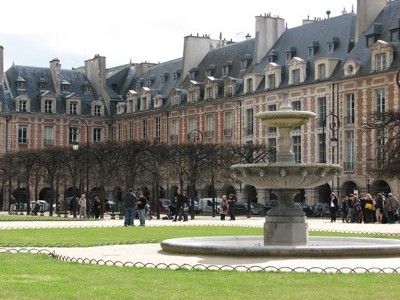 For walkers, Paris's only problem is that it's not on a human scale. The planning is far too big: walking from point to point quickly becomes impractical. To give you an idea of its sheer scale, one Researcher went up the Eiffel Tower with a fellow architecture student, from which they could see the Grande Arche de la Défense, illuminated brightly. They decided it would be an easy walk. However, like most of the buildings in La Défense (and similarly, the Grande Bibliotheque), the Grande Arche was conceived as a pure shape - from a distance it looked much closer than it was. It took them over three hours to get there. Mind you, the sheer size of it was mind-blowing when they did get there.

Paris was redeveloped extensively by Napoleon III in the late 18th Century. This was supposedly to 'do away' with slum areas, but cynics noted that the vast new boulevards and avenues (such as the Champs-Elysées) were also now the perfect width to fit militia and cannon down, and also far too wide to barricade effectively. (Parisians, in common with the rest of the French race, were, and still are, prone to barricade the streets at the slightest provocation.)

Still, walking in Paris is always fun as long as you make enough brasserie stops.

For cheap eats (those on a serious budget) live out of supermarkets. Find the cheapest one near where you're staying, the one the Parisians use. Water should be around 20 cents a bottle: this stuff is perfectly drinkable, even to non-Parisians. All good things should be available from supermarkets - fresh fruit and veg, meat, cheese, chocolate and other essential purchases - and you should be able to identify tins with stuff in by the picture on the label.

The continentals expect you to weigh and bag your own fruit and veg, and print out the appropriate label, so there is a simple machine with big buttons with pictures on for doing this near the fruit display. Best of all, when you get to the checkout the girl passes it all through, warbles a mouthful of high-speed French at you, and you can just look at the display and give her the appropriate money. No French needed, other than 'Merci' ('Thank you').

If you've got a good phrase book2 then you can try a restaurant. You really should, being in Paris and all. If you make an attempt to speak French and are not being obnoxious, the staff are more likely to try their best to help you out and get what you want. Compare this to an experience in Nuremburg, where one Researcher ended up with a dish of fried potatoes with a side order of potatoes, fried in a different way. This is true for all countries other than your own, anyway. (Being polite and trying to speak the language, not the potatoes thing.)

If you stay in Paris for a long time, or even if you live there, you will never discover a source for any kind of flavoured dessert jelly (that's jello, not jam, for any Americans consulting the Guide). It is impossible to get hold of. The best they can do is a kind of rendered gelatine that has a picture of a dripping cow's carcass on the label. Also, the French have no concept of baked beans. It is possible to buy haricot beans in tomato sauce, but only in army surplus stores, as it is evidently a taste only acquired by soldiers. If you are partial to either of these items it is best to take them with you.

Eating in any kind of non-French fast-food chain is considered deeply touristic behaviour, as is sitting out on a bistro forecourt on the Champs-Elysées, or liking the Eiffel Tower. If you must praise the city's architecture, stick to the Grande Arche at La Défense, of which Parisians are inexplicably proud.

And don't try to be vegetarian in Paris either. Beyond vegetables themselves, anything else has to be bought in a chemist. The French just don't get the concept. If you're an omnivore, Paris presents no problems. Quite the reverse, in fact.

It would be easy to assume that the best views in Paris are from the Eiffel Tower - after all, it's the highest point in the city and the most famous landmark - but you'd be wrong. Gustav's folly is out of the centre of town, and its very height is its enemy, flattening all the perspective out of the skyline, and distancing you from the action.

You can climb up the Arc du Triomphe and get a better idea of the shape of the city - the classic straight line running from the Louvre, up the Jardins des Tuileries, pinned to the ground by the obelisk in the Place de la Concorde. The Champs-Elysées, those mystical fields of the blessed, track wide and inviting up to your resting place in the middle of the Etoile Charles de Gaulle. Turning around, you can see the 20th Century extension glorying in all France's recent military triumphs3, up the Avenue de la Grande Armée to the ultra-modern Arche de la Défense.

For a more artistic view of the city, climb the hill which has traditionally housed impecunious painters, potters and other penniless creatives. Montmartre is adorned with Sacré-Coeur, the most beautiful church in Paris (at least externally), but the panorama from its steps is worth the climb on its own (or take the funicular railway and save your feet).

If you are determined to admire the Eiffel Tower, the place to do it from is Place du Trocadero, across the river, from where you can appreciate its scale and marvel at the way a whole drill-square can be capped by a spider's web of steel. One warning: don't try to take tea at the Café du Trocadero - the waiters are rude even by Parisian standards, and they'll charge you extra for milk.

The best viewpoint in Paris, however, has been saved for last. It's not a famous landmark in itself, but it gives a better feeling of the dynamics of the city than anywhere else, and the only decent perspective on Nôtre Dame and the Pompidou Centre. Head for the department store Samaritaine, and take the lift up to the top floor, then walk up the stairs and out onto the roof terrace. There's a splendid café; you're ringed by boxes of flowers in the summer, adding a perfume to the heady mix; you can watch the bateaux mouches shuttling up and down the Seine; and there's even a handy map to explain exactly what you can see. It's the best place in town to take a breather and remember why you're there.

The Sights of Paris 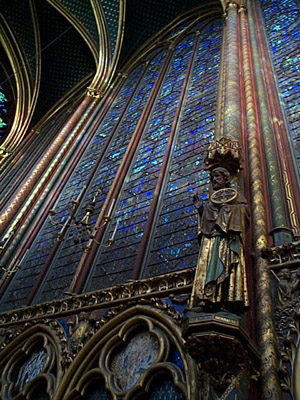 Here's a suggested itinerary for those who want to do Paris in a rush.

If you're heading for the capital, here are a few tips on how to survive the great city.

If you then get back to the Rue Beauborg and head south you'll reach the bottom of the road and you'll be confronted with the Town Hall. From this point you can head three ways:

1Tightly, so that you can't hear what other drivers yell at you.2Which you really must bring, as it's very rude not to try the local language at least a bit.3Which include... oh. Well, probably lots of excellent, entertaining and successful campaigns. Probably.