The Mona Lisa - an Enigmatic Work of Art Content from the guide to life, the universe and everything 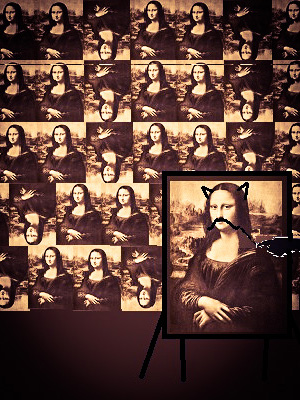 The Mona Lisa is considered by many to be the prototypical Renaissance portrait. Painted sometime between 1503 and 1517 by Leonardo da Vinci, La Gioconda (or La Joconde in French, but commonly known as the Mona Lisa) is perhaps the most widely known and recognised work of Western art. The painting was commissioned by Francesco di Bartolomeo di Zanobi del Giocondo, but da Vinci never fulfilled the contract. He was so pleased with it that he carried the painting around with him on his travels to show off his artistic talents. It depicts a woman, possibly Lisa del Gherardini (Francesco's wife) in typical early 16th Century Florentine dress, seated in a mountainous landscape, who wears a smile usually described as 'enigmatic'.

The perspective of the background is slightly off, the horizon is somewhat tilted, but that is the sort of thing that da Vinci liked to experiment with. Da Vinci made many innovations in the art of painting, and a lot of his notebooks are devoted to the effects you can get. He revolutionised the use of perspective, both of line (the way things converge towards a vanishing point on the horizon) and of colour (the aerial perspective, how colours fade with distance). Given his genius (nobody could draw with such intense observation) and the depth of study he had put into the subject it can only be concluded that this was done on purpose. He would have been fully aware of the imbalance between his point of view of the Mona Lisa's face (more or less full on) and the point of view (higher) that places the far hills and horizon below the viewer. What was revolutionary about the Mona Lisa is the shading of the face, the technique called sfumato1. Da Vinci put the paint on in many thin layers, building up a gentle image that your eyes can't quite focus on: hence the enigmatic nature of the smile.

The smile's captivating nature, often credited as the source of this painting's remarkable popularity, may be partly an accident of contemporary symbolism: slight opening of the sides of the mouth was considered to be a symbol of elegance at that time. In 16th Century Europe, teeth were not shown in paintings - even when they had their mouths open – unless the artist was painting the dead or a base person who had devoted their lives to carnal pleasures, a view that was still held in polite society in 1703, according to John Baptist de La Salle's Les Règles de la Bienséance et de la Civilité chrétienne, à l'usage des Écoles chrétiennes (The Rules of Christian Decorum and Civility):

There are some people who raise their upper lip so high or let the lower lip sag so much that their teeth are almost entirely visible. This is entirely contrary to decorum, which forbids you to allow your teeth to be uncovered, for nature gave us lips to conceal them...

Following forensic and computer analysis there is speculation that da Vinci used his own face as a basis for his masterpiece. This theory is given weight by her thick brow ridge, which is common in 90% of males, but very rarely occurs in females. Although Sigmund Freud concluded that the Mona Lisa was based on da Vinci's memory of his mother and his suppressed incestuous sexual feelings for her - but we won't go into that here. 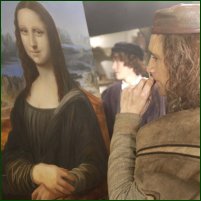 The 30"×21" (77cm×53cm) painting has been kept in the Louvre Museum in Paris, France since the Restoration2. The picture was originally larger; they cut off a pillar on each side because the frame they wanted to use was too small. Despite the work's enduring popularity, the curators have sadly seen fit to ensure that a trip to see it is likely to prove disappointing. The relatively-low light levels, the thick throng of visitors making close access difficult, and the protective layers of glass3 in front of it all conspire to make it seem dull and uninspiring. Anyone wishing to study the picture in detail would be well advised to obtain a high-quality print. On the other hand, a trip to the Louvre to glimpse the Mona Lisa in person rates quite highly on some people's Bucket Lists.

So why is the Mona Lisa still so popular? Perhaps it is the mystery which surrounds the subject which adds to the appeal, but who knows for sure? We know that beauty is in the eye of the beholder, and countless eyes have admired the Mona Lisa. The lady with the mystic gaze has inspired poets and writers, and art students have a never-ending fascination with her, especially some who recreated her image in seaweed on a beach in Florida in 2011. There are also some pictures created by modern artists with references to the Mona Lisa, including Marcel Duchamp and Eugène Bataillee.

The Mona Lisa painting has appeared in so many advertisements it would be impossible to list them all here. It has been photoshopped, repainted and her head replaced with different ones an unknown number of times, but there's a lot out there. For instance there is a Mr Bean version, Betty Boop, and Disney's Mona Lisa is Daisy Duck. Perhaps the most obvious imitation is of the animated Lisa Simpson recreating the famous pose in The Simpsons. Although some pop-culture references are parodies, others honour the subject, but some, like Monty Python, are not so kind. Then there are the parodies of the parodies, like Salvador Dalí's Self Portrait as Mona Lisa.

The Mona Lisa has been recreated using Rubik's Cubes, Lego, precious gemstones, jelly beans, cups of coffee (the 'Mocha Lisa'), and around 6,000 slices of bread were blowtorched to create her image in toast by Maurice 'Toastman' Bennet in 2010.

Mona Lisa Smile is a 2003 film starring Julia Roberts, Kirsten Dunst and Maggie Gyllenhaal. Julia Roberts plays the part of a teacher at a women's art college, and the film charts how she affects the lives of her students. The various artists soundtrack includes 'Smile', which Charlie Chaplin had composed the music for in 1936. Lyrics were added by John Turner and Geoffrey Parsons in 1954, and the tune has been recorded by lots of wonderful singers since. These include Nat King Cole, Diana Ross, Misia (for charity), Westlife and Michael Jackson, who said it was his favourite song. His brother Jermaine Jackson sang it at Michael's memorial service in 2009. For the Mona Lisa Smile film, 'Smile' was sung by Oscar-winner Barbra Streisand.

A smile-less Mona Lisa, showing her with a black eye, bruised face and sad expression, appeared in a poster to campaign against violence on women. Entitled 'Could you live without her smile?', it was certainly a head-turner.

Fans of Dr Who will be aware of a question hanging over the picture's provenance. In the story 'City of Death4' written by none other than the late great Douglas Adams, it was revealed that in fact da Vinci painted six copies of the Mona Lisa. This was part of an evil alien's devious plan, the details of which are unimportant here, but the net result of which is that although the Fourth Doctor thwarted the plans, the canvas on which the painting now in the Louvre was painted has the words 'This is a fake' written on it in felt tip.

Trekking Where no Portrait has Gone Before

In Star Trek - The Next Generation series three episode 'The Most Toys', sentient android Lt Commander Data (Brent Spiner) is kidnapped by a Zibalian trader called Kivas Fajo (Saul Rubinek) for his private collection of stolen rarities and one-offs. Imprisoned aboard Fajo's spaceship the Jovis, Data peruses the unique assemblance of ill-gotten gains, which includes the Ark of the Covenant and Leonardo da Vinci's painting of the Mona Lisa. Data is attempting to imitate her smile when he is interrupted by the return of his captor.

In Doctor Who spin-off The Sarah Jane Adventures, the episode 'Mona Lisa's Revenge' (2009) saw the Mona Lisa come to life and escape her confinement. She also has the ability to trap unfortunate people inside other paintings, including Sarah Jane herself.

Save the Mona Lisa!

The Mona Lisa appears in the 2009 disaster film 2012. The priceless painting is secretly removed from the Louvre and replaced with a replica. The original is squirrelled away for safekeeping, but when the director of the Louvre announces he is going to hold a press conference he is branded a threat to national security and silenced, permanently, by the US Government.

The song 'Mona Lisa' was written by Ray Evans and Jay Livingston for the film Captain Carey, USA. Sung by Nat King Cole, it won the Academy Award for Best Original Song in 1950, and spent eight weeks at the top of the US singles chart. Almost two decades later, Cole stated in an interview that 'Mona Lisa' was among his favourite songs that he had ever sung.

Do you smile to tempt a lover, Mona Lisa?
Or is this your way to hide a broken heart?
[...] Are you warm, are you real, Mona Lisa?
Or just a cold and lonely, lovely work of art?

1Art terminology (Italian) meaning soft, vague or blurred.2Apart from between 1911 and 1913 when it was stolen, but later discovered in a hotel room in Florence.3Yes, it's bulletproof.4Douglas Adams later recycled most of the plot of both this and 'Shada', another of his stories from the same season which was never completed due to industrial action. These formed the basis of the book Dirk Gently's Holistic Detective Agency.