Sir Terry Pratchett - Author Content from the guide to life, the universe and everything 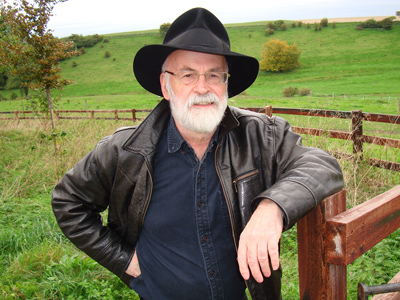 Terry Pratchett was best known for his Discworld series - a series of fantasy novels based on a planet in the shape of a disc, which rests on the back of four elephants, who in turn stand on the back of A'tuin, the great star turtle. But what sort of a mind could come up with this? Who was the man behind the books?

Terrence David John Pratchett was born on 28 April, 1948 in Beaconsfield, Buckinghamshire, England. He attended school until 1965, but was never very interested in it, choosing a technical school over the local grammar school because he thought 'woodwork would be more fun than Latin'.

He had his first work published in the school magazine when he was 13, and his first commercially published work at 15, showing early promise of what turned out to be a great writing career. He started his A-Levels1 but after the first year decided to leave school and get a job in journalism instead. He finished his A-Level English on day-release while he was working, and gained journalistic qualifications too.

His first book (The Carpet People), which he illustrated himself, was published in 1971, followed by The Dark Side Of The Sun in 1976 and Strata in 1981. Meanwhile, Pratchett had a variety of jobs in journalism, including being a publicity officer for nuclear power stations.

Pratchett's first Discworld book, The Colour of Magic was published in 1983, followed by The Light Fantastic in 1986. After this, there was no stopping Pratchett. He began releasing one Discworld title every six months, along with the Johnny Maxwell books for younger readers. Spin-offs aplenty appeared, including play scripts, maps, diaries, computer games, and books of the artwork of the Discworld.

His Discworld series is highly imaginative, although references to other works can be found throughout his books. He has been accused of plagiarism in the past, but he maintained that taking from one book is plagiarism, taking from many is research. Many Pratchett fans2 amuse themselves by trying to find all the references in his books, although it is a near-impossible task unless you are as well-read as the man himself.

Terry Pratchett's books tend to be comedic fantasy, and even those that aren't fantasy-based (as in the Johnny Maxwell books) are humorous. Other than the novels already mentioned, he has written the Nome Trilogy (Truckers, Diggers and Wings), otherwise known as The Bromeliad; and The Unadulterated Cat, a book which can help you distinguish real cats from the crowd. He wrote for adults and children alike, and produced over 65 books. The original Discworld books were mostly taking the mickey out of the fantasy genre, however he soon settled down into parodying our own world, including references to Shakespeare plays, the newspaper industry, and international diplomatic (or not-so-diplomatic) relations.

Many people have compared Terry Pratchett to Douglas Adams, which is a little unfair to both authors. They were both English, and both wrote humorous fantasy, but that is where the similarities end. The writing styles of the two authors were very different, along with the settings of their books, the depth of the comedy, and just about every other point of comparison you could think of. When asked if he objected to being compared to Adams, Terry replied 'Actually, I object a bit now...I mean, I've got about 14 or 15 titles out there, I think I write like Terry Pratchett. I think Hitchhiker's is in danger of looking dated now. But it sure had an effect.'

Terry was highly professional about his work, and said that hard work is far more important than inspiration, although obviously some inspiration is necessary too. And as for his inspiration, Pratchett said:

I make up my ideas in my head, and that's where the inspiration comes from as well. Yes, sometimes I can see, in the real world, unusual juxtapositions, or there are little triggers which happen to set something off in my mind, but usually I get my ideas by thinking logically about things that you're not supposed to think logically about. 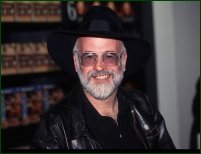 Terry married Lyn in 1968, and they had a daughter, Rhianna, who is a writer in her own right. He bred carnivorous plants (which he said isn't as interesting as you might think) and was a trustee of the Orangutan Foundation.

In 2007, Terry was diagnosed with a rare form of early-onset Alzheimer's Disease, which first manifested itself as difficulties with hand-eye coordination. He himself described this condition as 'an embuggerance'.

Terry said he didn't want to get a life as he felt like he was leading three already. The volume of work he produced, plus signing and promotional tours, interviews, appearances and so on meant that he didn't have much time for anything else. Even his carnivorous plants had taken over the greenhouse to an extent that he was scared to go in! He kept his private life private, which is fair enough, but one thing we do know about him is that he liked wearing hats. He could be found in Internet forums occasionally, however if you did find him you probably wouldn't have known it: 'I've been on a few UK boards, but I get fed up with smart alec kids telling me I'm not me. So now when I go on I use a pesdue..psed..false name.'

Terry Pratchett received many accolades, including honorary degrees from the universities of Warwick and Bath, an OBE in the Queen's Birthday Honours List in 1998 for services to literature, and the Carnegie Medal for the best children's book of 2001 for The Amazing Maurice and his Educated Rodents. He was knighted in the January 2009 New Year's Honours for services to literature after selling more than 55 million books worldwide.

On Thursday 12 March, 2015, Terry Pratchett's Twitter account announced that he had finally become acquainted, personally, with one of the most enduring characters from his books, in the form of three tweets: 'AT LAST, SIR TERRY, WE MUST WALK TOGETHER.'3; 'Terry took Death's arm and followed him through the door and on to the black desert under the endless night.'; and 'The End.'

1Art, History and English.2Such as on the Annotated Pratchett File's website.3Death's words were always written entirely in upper case.