'The Carpet People' by Terry Pratchett Content from the guide to life, the universe and everything 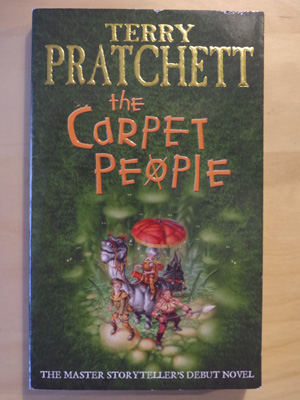 To every story there is always a beginning, a genesis, a bright point of creation. Often that point is referred to with reverence even though no one has a clear idea exactly what they're talking about. In the dim and distant past a 17-year-old boy wrote a story that actually managed to get published. Its small print run was released and sold out, leaving only the legacy of its title on those pages at the front of books entitled 'By The Same Author'. Enough pressure was exerted upon the same author, at the age of 43 years, to revisit the story so loyal followers could enjoy it once more. So, Terry Pratchett weaved a little of his magic and gave new life to an old story - the tale of The Carpet People.

Stories are the heart of the past. From the time of creation stories chart the significant events that lead to the present - even though many people don't necessarily believe them. Now the Carpet is threatened and a new tale is in the making. A tale of destruction and its agents, of primitive tribes and noble people, of brothers and philosophers - and an adventure that begins with a flattened village.

This is a tale of high fantasy that shows the humble, yet brilliant, beginnings of Pratchett's story-telling talent. There is a twinge of a feeling that the young Pratchett had read, among other things, the Lord of the Rings. There are names and creatures throughout the book which have a striking resemblance to Tolkien's way of thinking. The background is rich with ideas and people - an impressive effort for a teenager. While a more capable and adept storyteller, in the form of a middle-aged Pratchett, has edited the current version, the innocence and vibrancy of the younger version still shines through. The book is highly recommended to newcomers and existing fans of Pratchett alike.

The remainder of this entry may be considered a spoiler. If you haven't read The Carpet People, read on only if you don't mind knowing a lot of the details before you reach them.

The (Under) Lay of the Land

The Carpet is a very unusual place. Pratchett appears to have a habit of setting his stories in unconventional situations. At an approximation the entire tale of The Carpet People takes place in an area of carpet about the size of an average hardback book.

From parts of the Carpet referred to in the story the world appears to lie in someone's front room. The Hearth, the Chairleg, the Underlay, the Matchstick - admittedly some of these might suggest a kitchen, but the very presence of a carpet suggests otherwise.

Most of the inhabitants know only a small amount about what lies around and beyond their realms. Written knowledge is something that existed once, but much of it has been destroyed by the ignorance of Emperors and Kings. There are a few wise folk, older individuals who managed to read some of the lost lore before the books were gone, but they are few in number. They generally serve as advisors and philosophers, spouting often unintelligible wisdom which the common folk attempt to live by.

Below the Carpet is the Underlay, a dark and savage place full of the sort of creatures you threaten children with when they're naughty, or hint at in bedtime stories. Few people even consider what may exist above the Carpet - for most to think of above is to think of harsh retribution and destruction, as 'things' fall from the sky without warning.

Hairs, among which dust and fluff form in drifts, cover the surface of the carpet. The colours of the hairs vary across the whole spectrum, from dark to light, violet to red. The creatures who live amongst the hairs, and feed upon them or their fruit, take on the same hue, making it easy to spot animals that have travelled from foreign regions.

The People of the Carpet

Throughout the tribes of the Carpet the one certainty is that every race, in its own language, will have described itself as 'The People' or 'The True Human Beings'. There are three Human tribes referred to: the Munrungs, the Dummi and the Deftmene.

In addition there are other races that do not quite come under the description of 'Human' - more 'Humanoid'. These include the Vortgorns, the Wights and the Mouls.

Finally, there are animals and completely inhuman creatures, most of which are only mentioned in passing. There are horses, goats, badgers and pigs, for example, but many other creatures that don't have a human equivalent, including: Dust Rabbits; Weft Borers; long-necked Soraths; fat Tromps; Gromepipers; and Silverfish. There are some creatures mentioned with a little more detail:

The Cast of Characters

There is a whole cast of characters, a few mentioned in passing or briefer still. There are many that get more attention, flesh on their bare bones...

The story is a monumental one, telling the tale of the Carpet and how the Fray threatens the end of everything. The Fray is an invisible and destructive force that comes from above without warning. It flattens everything in its path, hitting like a nuclear blast without all the fire and radiation.

The home of the Munring is hit by the Fray, leaving them without a home - and faced with a new, fierce breed of Snarg, ridden by terrible Mouls. They decide to move towards the nearest town, only to find - via their medicine man Pismire - that Tregon Marus has been destroyed by the Fray too. So, the tribe pushes onwards towards the centre of the Carpet, chancing across the stomping ground of a Termagant and the petrified remains of King Brocando of the Deftmene. Snibril manages to outwit the creature and uses its tears to revive the King who offers them safe haven at Jeopard, home of his people.

However, the King has been petrified for a year and the travellers discover that under the rule of Antiroc, his brother, the city of Jeopard has fallen to the influence of Mouls, under the wily Gormaleesh. While the majority of the tribe wait in the fields around the city, a small scouting band follow the king into a secret route that passes through the Underlay and up through the heart of the city into the King's chambers.

They find the Moul Gormaleesh in the chambers with Antiroc, but faced with death at Bane's sword the Moul vanishes down the secret passage. The arrival of Fray, and its associated wave of destruction, splits the group so that Bane, Pismire, Brocando and a wounded and unconscious Glurk are forced back into the secret passage, while Snibril is left amidst the destruction. In the darkness of the Underlay Gormaleesh captures everyone except Glurk and takes them to the surface. Glurk regains consciousness in time to start following the Mouls and their prisoners.

Gormaleesh and the Mouls head out to High Gate Land and the bronze mines of the Vortgorns which they Mouls are using to create weapons. They are thrown into cells and Bane promises that he will kill Gormaleesh next time they meet. Glurk, who has tracked them all the way, arrives dressed as a Vortgorn guard and releases them - guiding them through the bronze tunnels to a stable filled with Pones. The hulking creatures have lost interest in High Gate Land since the Mouls arrived and are happy to take the prisoners with them.

Crashing out of the wall around the mines on the Pones, and hovering down to the ground below, Glurk explains that he met a Wight, called Culaina, who told him where the Mouls were going and how he would escape. Culaina is unusual in that she's a Thurnorg, a one-in-a-million Wight who can see all possible futures, not just the one for the present she currently exists in. Glurk must return to see Culaina to tell her how they escaped so that she can remember it when she originally met him. They find her in a great tower of sugar and she explains that there is much yet to be done and they must all work together to bring about the best possible future.

Snibril, in the meantime, has rallied a force of Munrungs and Deftmene. He travels to the city of Ware knowing that this is the only place left and that, as a result, it must be the next target for the Mouls. Snibril meets up with small band of Wights who, by a million-to-one chance viewed by Culaina, survive a desperate battle with Mouls following the timely intervention of the Munrungs and Deftmene. The intervention of Culaina, however, results in the Wights losing their ability to remember the future as the present in which they survived the encounter with the Moul is not the one in which they ideally existed.

Closer to Ware, the Munrungs and Deftmenes discover a force of demoralised Dumii, the remains of the 15th Legion. The Legion's General has been killed so command has fallen to Sergeant Careus. The Legion suffered the effects of Fray and was then ambushed by Mouls, with only a fraction of the force surviving. Snibril rallies them to his cause and they all head onwards to Ware.

Paths collide and both Snibril and his friends who visited Culaina arrive in Ware only to find that the churlish Emperor has fallen under the influence of Jornarileesh, leader of the Mouls. The Emperor is rescued, but Jornarileesh and his Mouls escape into the Underlay.

The heroes discover that the remaining Legions of Ware have not returned and that the Mouls will attack the city the moment Fray strikes. Troops and defences are prepared, so when Fray strikes they are ready for it and catch the Moul unawares. Preparations aside, Culaina foresees success is a million-to-one chance. In that one future the armies of Ware are faced with defeat - when reinforcements arrive in the form of thousands and thousands of Wights.

In the end, with the future decided, the Wights regain their ability to remember and choose to disappear again, finding their own Thread in the great scheme. Sick with the abuse of hereditary Emperors, Bane is elected President of Ware - and the grudging respect between Bane and Brocando means closer links between the Dumii and Deftmene. Glurk remains as chieftain of the Munrungs and Snibril decides he wants to find out more about the Carpet - What Fray is? What more there is to know? What lies beyond the Edge?

So, the great story ends - and many more begin anew.