Matches Content from the guide to life, the universe and everything 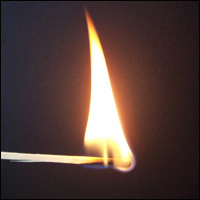 The match was invented in 1805 by a man named Jean Chancel. As is the way with history, this bold statement pushes a great many experiments under the carpet, but Chancel is the man usually credited with the deed, although about the only resemblance between his device and the modern match is that the end result is a burning stick. Nevertheless, Chancel's invention was a substantial improvement over the existing method of firelighting, which involved igniting wood shavings from sparks struck from a flint and steel. If you have ever tried this, you'll know that even under ideal conditions it's not an easy task - especially if you're desperate for a cigarette.

Jean Chancel, Sugar and the Match

Chancel, using materials readily available in the early 1800s, based his match around a wooden splint tipped with sugar. To our modern eyes this may seem to be a curious choice, but Chancel knew that, once lit, sugar burns with a very hot flame. The problem, as five minutes with the kitchen sugar bowl will reveal, is to get the crystals to ignite in the first place.

The phenomenon that we call burning is a chemical reaction between the fuel substance and oxygen from the air. Sugar in the bowl is stable in air; you can go away on holiday and confidently expect it not to have gone up in flames by the time you get back. In order to get sugar (or any other fuel) to burn, you have to first heat it up to a certain critical temperature, which for sugar is very hot indeed.

Any chemical compound consists of a number of chemical constituents, bound together by a certain amount of energy. If the constituents are broken apart, for instance when the compound is burning, the energy that was being used to hold it together is released, usually in the form of heat. With sugar, once you have induced it to catch fire in the first place, enough of this heat is released to keep the reaction going until there is no more sugar left.

Once Chancel's sugar was burning, then, it would keep going long enough to ignite the wooden splint. His problem was to provide the initial burst of heat, and he solved this by mixing the sugar with another white crystalline substance, potassium chlorate. This is the stuff that is found in chlorate tablets for the treatment of sore throats.

The clever bit was to dip the coated tip of the splint into the bottle of concentrated sulphuric acid that you kept (very carefully) in your coat pocket. This caused the potassium chlorate to decompose into an unpleasant yellow gas, chlorine dioxide. This not only smells like a cross between chlorine and burnt sugar, but also has the endearing property of exploding on contact with hot glass, sparks, alcohol, or indeed any organic material, such that it often appears to detonate for no particular reason. In the presence of sugar and wood, it detonates with gusto, providing in a flash the initial kick required to set light to the waiting sugar molecules. Once the sugar is blazing away, the wooden stick catches fire and the match is alight.

Later workers continued to refine the method, culminating in the Promethean Match, patented in 1828 by Samuel Jones of London. This consisted of a glass bead filled with acid, coated in the igniting mixture, and then wrapped in paper. Users merely had to break the glass with pliers (or with their teeth!) to initiate the reaction that set light to the paper wrapping.

The search was on, though, for an alternative that did not involve dangerous acids. Many researchers worked with the idea that rubbing two rough surfaces together will produce a certain amount of heat, and in the early 1800's several commercial manufacturers, including Samuel Jones, produced chlorate-based friction matches. The first was a splint tipped with a mixture of potassium chlorate and antimony trisulphide; if this was rubbed vigorously enough on a piece of sandpaper, the chlorate could be made to oxidise the sulphide, resulting in enough released chemical energy to light the splint. However, these matches were extremely difficult to light, and frequently erupted in a shower of sparks. In addition, the smell of emitted hydrogen sulphide gas (as found in rotten eggs) was offensive to the extent that Jones' box carried the warning 'Persons whose lungs are delicate should by no means use Lucifers'.

Meanwhile, other workers were focusing on the fact that white phosphorus and sulphur react explosively when melted together. Again, potassium chlorate provided the oxidising trigger. All three compounds were combined on the match-head, so that a rub across a rough surface provided enough frictional heat to set the reaction going. Far from being difficult to light, these matches were prone to spontaneous ignition, but frantic rubbing and bottles of acid could now be dispensed with and these new matches entered common usage.

Unfortunately, white phosphorus is a lethal poison causing an unpleasant type of bone gangrene called Phossy-Jaw, and escalating deaths of workers in the match factories resulted in a law being passed which banned its use.

Phosphorus occurs in a number of forms, and researchers quickly found that one of the red variants, known as Schenk's Scarlet, made an adequate replacement. Although it can produce the symptoms of phosphorus poisoning when injected into the bloodstream, it is inactive when the fumes are breathed in or the solid ingested. More modern versions are based on phosphorus sesquisulphide, potassium chlorate and powdered glass, with some added colouring to give the familiar red head.

Of course, of the 100,000,000 matches used daily in the UK alone, a large proportion are not the traditional 'strike anywhere' matches described above, but are instead the ubiquitous 'safety' matches. These do not depend on friction alone to ignite them; there is a chemical reaction between the match and a special striking surface on the box. But that, as they say, is another story.