The Human Respiratory System Content from the guide to life, the universe and everything 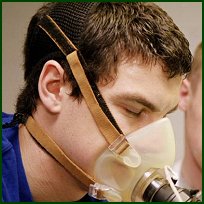 We breathe in and out between 15 and 25 times each minute, but we rarely consider how this automatic process works. Breathing is the means by which carbon dioxide is eliminated and oxygen taken into the body. We may only become consciously aware of it when exercise, or some other reason causes an automatic increase in our breathing rate, or when we hold our breath and find we are forced to take in air after only a short while.

The Structure of the Respiratory System

Air enters and leaves the respiratory system through the nose. It warms and moistens the air before it reaches the lungs, and helps remove unwanted particles, like dust and soot.

The profile of the nose is termed the dorsum nasi, the tip is the apex and the nostrils the external naris. The ethmoid bones are located in the nasal cavity, though much of the internal structure of the nose is cartilage rather than bone. This structure creates a highly complex and convoluted passage - a maze for the air to pass through. This provides a greater surface area on which unwanted foreign particles in the air may be captured and removed from the body. Goblet cells in the lining of the nose secrete mucus, which helps to trap and eventually remove particles from the air. The mucus is constantly being moved outwards from the nose by cilia, tiny hairs on the cells forming the nose lining.

The pharynx extends from the back of the nasal cavity down to the second cartilage of the trachea, and ends behind the tongue. About 13cm long, it is described as a funnel-shaped tube, and is divided into three sections: the nasopharynx near the nasal cavity, the oropharynx near the tongue and the hypopharynx, which extends towards the cricoid cartilage. The pharynx is followed by the start of the trachea and the larynx, or voice box.

The Larynx and the Trachea

The larynx is effectively the opening to the trachea, and above it lies the epiglottis, which provides protection by preventing food from entering the trachea during swallowing. It is made of elastic cartilage; the cricoid cartilage at the top is followed by a further 16 cartilages: the C-shaped rings that hold the tube open. The section of the C situated at the back contains instead elastic connective tissue. The front is covered by the hyalin cartilage of the ring. The reason for the elastic connective tissue is to allow the tube to enlarge when large food particles enter the oesophagus.

The Bronchi and the Bronchioles

At the level of the fifth thoracic vertebra, the trachea divides in a Y-shape into the right and left primary bronchi. The point at which it divides is an important site, being involved in the cough reflex.

The right primary bronchus is wider than the left, which, combined with its angle makes it a trouble spot, as it is more likely that inhaled foreign objects will end up here. On the right-hand side, the angle of the primary bronchus is 100 degrees while on the left it is 110 degrees.

The primary bronchi in turn each divide into bronchial branches, one each to each lobe of the lungs. The left bronchus divides into two lobar bronchial branches, the right into three. The secondary bronchi divide again into the tertiary bronchi, eight on the left, and ten in the right-hand side of the lung. the tertiary (also called segmental) bronchi then divide into terminals, the number of which varies between individuals.

'Goblet' cells lining the bronchi produce mucus, which, by the actions of ciliated cells, is constantly moving upwards and towards the nose, in order to remove dust and other foreign particles.

The Gross Structure of the Lungs

The lungs are effectively enclosed in a box, formed from the diaphragm at the base and the ribs at the sides.

The diaphragm is a muscular membrane connected to the inside wall by tendons, which separates the thoracic and abdominal cavities. It plays an important part in inspiration and expiration, and also in the cough reflex and hiccups (though whether one thinks hiccups themselves are important is another matter).

The lungs are attached to the inner chest wall surface by the pleural membranes, between which is pleural fluid1. These hold the lungs firmly to the inside aspect of the chest wall and allow the movement of the ribs during inspiration and expiration to be transferred to movement in the tissue of the lungs. The pleural fluid helps to reduce friction during this movement.

The right-hand lung has three lobes, while the left has two. The lobes are determined by creases, or fissures: two on the right lung and one on the left. The left lung is smaller because of the location of the heart; the cardiac notch is the groove in the left lung where the heart sits. There is also an indent at the base, the hepatic notch, where the liver sits.

Within the lungs are lobules: each is a small compartment that houses a lymph vessel, an arteriole, a venule and a branch from the terminals.

The terminals are actually not terminal, in that they in turn branch into respiratory bronchioles, which in turn divide into the alveoli sacs.

There are approximately 600 million alveoli in an adult human, giving a total surface area of about 100 square metres, equivalent to one third of the area of a tennis court. This large surface area greatly facilitates gaseous exchange, which is further facilitated by the fact that the alveoli are lined with a very thin tissue. At the point of exchange this is just two cells thick: one cell for the alveoli tissue, and one further cell thickness for the adjoining blood vessels.

The alveoli consist of two main cell types: simple squamous (type I), and septal (type II) cells. The type II cells produce a lipid/protein substance called surfactant that lines the alveoli, speeding up gas transport by reducing surface tension and preventing the alveoli from collapsing. The squamous (type I) cells are the most abundant in the alveoli. In addition there are found alveoli macrophages2, and monocytes, which are capable of changing into macrophages if required.

The Blood Supply of the Lungs

The lungs have a double blood supply. The pulmonary arteries provide de-oxygenated blood to be re-oxygenated, and the bronchiole arteries, branching off the aorta, provide oxygen-rich blood for the lungs.

The diaphragm is supplied with spinal nerves from segments c3 c4 and c5. The intercostal muscles are supplied by their corresponding thoracic t1 to t12 spinal nerves. The nerves of the diaphragm lead from the spine, and previous to this the brain stem. These nerves run back to collections of neurones in the medulla oblongata known as the respiratory centres. These are in turn connected to a second respiratory centre in the pons. The interplay between the cells of these two respiratory centres enables automatic breathing, the neurones are both stimulatory and inhibitory. The centres in the pons are not fully understood, however there are two recognised centres in this area: the pneumotaxic and the apneustic centres. These areas are involved in automatic breathing; if conscious control is exerted then these centres are overridden by the cerebella cortex. There is a direct line to the respiratory muscles through the relevant motor neurones coming directly from the motor cortex of the cerebella cortex. Built into the pons is a standard rate of breathing. This has to be variable, so there are connections between the pons and medulla, and the sensors that detect the oxygen and carbon dioxide concentration of blood, located in the aortic arch.

When we breathe, the components act together in the following mechanism:

Air in the alveoli contains high levels of oxygen and low concentrations of carbon dioxide compared to the blood, and this concentration difference is maintained by ventilation.

Oxygen dissolves in moisture lining the alveoli walls and diffuses down the concentration gradient into the blood plasma, where it combines with haemoglobin in red blood cells to form oxyhaemoglobin.

Carbon dioxide in blood plasma arrives largely as hydrogen carbonate ions (HCO3). The chemical equation for this is as follows:

In the tissues the equation reads from left to right; in the lungs it works in the opposite direction.

1It is this fluid between the pleural membranes which becomes infected in the disease pleuritis.2A phagocyte which ingests foreign material.3Note that 16% of oxygen is still sufficient for a life-saver to successfully apply artificial respiration, the 'kiss of life'.