Regulation of Blood pH Content from the guide to life, the universe and everything 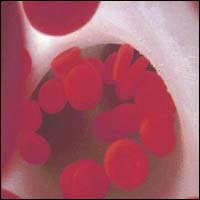 Although many people are unaware of the fact, maintaining the acid/base balance of your blood is actually vital to your survival. If the pH of your blood drops below 7.2 or rises above 7.6, then very soon your brain will no longer be able to function normally and you will be in dire straits1. As luck would have it, although you cannot consciously detect your blood pH, the human body does in fact have an elegant but effective means of coping with every change in pH, large or small. This relies on three interlinking objects: buffers, the lungs and the kidneys.

pH is a measurement of the concentration of hydrogen H+ ions and buffers are molecules which take in or release ions in order to maintain the H+ ion concentration at a certain level. Buffers in the blood include haemoglobin (Hb), certain proteins (Prot) and phosphates, and are the first line of defence whenever sudden changes in pH occur. When the pH is too low and the blood becomes too acidic, it is due to the presence of too many H+ ions in the blood. The buffers will attempt to mop up the excess. Conversely, a lack of H+ ions leads to the blood becoming too basic, and so the buffers release H+ ions. Buffers therefore help to maintain the pH of the blood by either sacrificing or accepting H+ ions as necessary to maintain the number of free H+ ions floating around in the blood.

Through these buffer reactions, the pH can be quickly corrected before any damage is done, but this does not provide a long-term solution to the problem. The buffers can only mop up or release so many H+ ions before they reach their capacity and are no longer of any use, and then the situation will once again become uncontrollable. The solution to this problem lies partly in another buffer, the hydrogencarbonate ion (HCO3-), and the following reactions:

As you probably know, humans inhale and use oxygen, and then exhale the carbon dioxide (CO2) produced. However, the amount of CO2 expelled from your system depends on how quickly you breathe. Breathing quickly will allow more CO2 to pass from the bloodstream into the air and will therefore lower the level of CO2 in the blood. What is shown in the diagram above is that the HCO3- buffer reactions are both reversible2, and so normally the buffer would only work to a certain extent, with CO2 soon changing back to HCO3- + H+. However, if the CO2 is removed through breathing, it can't react and turn back into HCO3- + H+. This means that H+ is removed from the blood by reacting with the buffer, but can't be remade because the CO2 required to do so has left the body. Even better, you can control exactly how much of it can't be remade by altering how much CO2 you exhale - ie, by altering how quickly you breathe.

The short version of the above is that you can raise your blood pH by hyperventilating3. Conversely, you can lower your blood pH by hypoventilating4. A fall below normal pH caused by hypoventilation is known as a respiratory acidosis, while a rise in pH due to hyperventilation is known as a respiratory alkalosis.

The body's metabolism produces many acids and bases, but the quantity of acids produced far exceeds the bases. This would lead to a metabolic acidosis if left unchecked, as the pH of the blood would drop due to the excess acid. The kidneys play a vital role in controlling blood pH, as, to put it simply, it is possible to pee out the excess acidic H+ ions or basic HCO3- ions in order to raise or lower the blood pH. As usual, the actual situation is a little more complicated than this.

The kidneys contain little tubes known as nephrons into which the greater part of everything in the blood apart from proteins passes, forming a 'filtrate'. The filtrate then passes along the different sections of the nephron, with different ions being secreted into the tubule or reabsorbed into the bloodstream. The filtrate eventually passes out of the kidney, down the ureter to the bladder, and then out of the body via the urethra5. About 85% of the basic HCO3- ions pass into the filtrate, but are 'selectively reabsorbed' into the bloodstream depending on the pH of the blood. This means that the body can choose how much alkali to take back and how much to get rid of depending on the current blood pH. The HCO3- that remains in the tubule reacts with H+ ions that have been secreted from the blood into the filtrate, and passes out of the body.

Meanwhile, another base, HPO42-, also passes into the filtrate. This allows the body to add unwanted H+ from the blood into the tubule, safe in the knowledge that the H+ ions will react with the HPO42-, leaving the HCO3- to be reabsorbed at will. This further aids the reabsorption of HCO3-, and helps to raise the body pH.

Lastly, the amino acid glutamine is held in the cells between the tubule and the bloodstream, and can be broken down by the body can break down into ammonium (NH4+ and HCO3-. The body then excretes the acidic NH4+ into the tubule so that it leaves the body in the urine, while the basic HCO3- is moved into the bloodstream. This mechanism also helps to raise blood pH, and the level of NH4+ excreted in the urine can be used by urologists to detect a respiratory acidosis6.

Putting It All Together

Ordinary buffers provide a short-term solution to sudden changes in pH, but cannot cope in the long term. There are therefore two systems in place to provide proper solutions, with one compensating for problems with the other. Firstly, the lungs can be used to control the amount of CO2 in the blood, thereby controlling the quantity of H+ ions that can react with the HCO3- buffer. Secondly, the kidneys can remove both H+ and HCO3- from the blood through various mechanisms. Each system can therefore independently alter blood pH.

Now that the different mechanisms have been covered, it's time to look at the four ways in which the blood pH can go wrong. These have already been mentioned, but only in passing, and deserve a full explanation of what causes them and how the body copes.

A metabolic acidosis is caused by excess acid production or loss of base. For instance, untreated diabetes causes ketoacidosis7, leading to an increase in acid production. On the side of loss of base, diarrhoea leads to an excess loss of alkaline pancreatic juices, while renal failure leads to an excess loss of basic HCO3- ions in the urine. The acidosis is countered by hyperventilation. Meanwhile, a metabolic alkalosis is caused by excess acid loss, and is therefore most commonly caused by vomiting out stomach acid. This is countered by hypoventilation.

There are several common reasons for testing the pH of a patient's blood - for example:

How Blood pH Is Measured

If you need to have your blood gases or acid/base status measured, then a medical professional will need to take a sample of your arterial blood: an arterial blood gas (ABG). The technique is similar to taking blood from a vein, but without the tourniquet; it involves an arterial blood syringe and needle, a swab to clean the site, and some cotton wool. The safest site to take an arterial blood gas from is the radial artery in the wrist, and so this is probably where it will be taken from. The person taking the blood should be properly trained and will explain what they are doing and why it is necessary before beginning.

You will be asked to bend back your hand as far as it will go, and someone will hold it in place for you. The medic will clean the site with a swab, find your pulse, and insert the needle into the radial artery in the direction of your elbow. This is quite painful compared to the 'sharp scratch' of entering a vein, and you should be warned of this. The pressure of blood in the artery will fill the syringe on its own - if they have to pull back on the plunger then the needle is more likely to be in a vein rather than an artery. Once the required amount of blood has been taken10, the needle is withdrawn. A piece of cotton wool will be placed over the site and, if you are fully conscious, you will be asked to press firmly on the site for around three minutes to prevent bruising. If you are too frail or ill to press hard enough then someone else will do it for you. The pressure in an artery is greater than the pressure in a vein, so if insufficient pressure is applied then you could end up with a nasty golf-ball shaped bruise. The blood is then taken to a blood gas analyser to be tested.

1That is to say, the situation — you will be too comatose to join the band...2The end products can convert back to the reactants again as soon as they are made, and so the mixture contains a balance of reactants and products which are simultaneously changing from reactants to products and back again.3Breathing quickly so that more CO2 than usual leaves your body.4Breathing slowly so that less CO2 than usual leaves your body.5The bit you pee out of, which is usually gender-specific.6When the lungs have caused the blood to become too acidic (respiratory acidosis), the kidneys respond by using this glutamate system to set things right by countering with a metabolic alkalosis.7This is where fats are used in an attempt to make up for a lack of glucose, a process which produces large quantities of acid.8This is the most depressing disease in the world to treat, and even worse to have. Just stop smoking. Now.9This would give a low blood pH.10Most blood analysers only require a very small amount.