Terry Pratchett's Discworld Content from the guide to life, the universe and everything 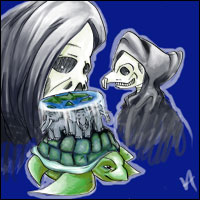 The Discworld is flat and rides on the back of four giant elephants which in turn ride on the back of a gigantic star turtle of indeterminate sex called Great A'Tuin. It is the most popular creation of author Terry Pratchett1. The very first Discworld novel was The Colour Of Magic, which starred a cowardly Wizard called Rincewind, a curious four-eyed tourist called Two-Flower and his rather strange travelling trunk, The Luggage. Following its success, Pratchett began to develop his theme, taking in turn various facets of our own mundane world such as Australia, rock'n'roll, high-energy physics, religion, opera, and fairy tales to name but a few, and examining them through the distorting mirror of not only his inimitable sense of humour, but also of the Discworld's strong magical field. Just about anything with which we are familiar has a simpler and more satisfying explanation on the Discworld.

From the icy mountains of the central Hub to the eternal waterfall that thunders over the Rim, the Disc is packed with tiny kingdoms, vast empires, intractable deserts, impassable mountains and any number of additional areas that can be approached only by looking in the correct manner, or by the application of magic.

Many of the stories, and certainly some of the most popular characters, can be found in the twin city of Ankh-Morpork, which straddles the soup-like river Ankh and is pervaded by a cosmopolitan atmosphere in a class of its own. It is ruled over by the manipulative and cunning Lord Vetinari, and policed (in the loosest sense) by the aptly named 'Watch', a conglomeration of misfits who have become some of the best-loved characters on the Discworld.

Many of the books are set in the Ramtops, a fragmented set of mountain kingdoms where the society could be said to be presided over by covens of witches, although they would be the first to deny this. In addition, there are a number of lands that bear a peculiar if slantwise resemblance to many of our own continents and countries, whether actual, historical or mythical.

The books often revolve around new and different characters, but there are always a few who reappear time and time again. The Librarian at the Unseen University2 is a good example of this, a man turned into an Orang-Utan by a magical accident, who now refuses to be turned back. Many of the stories involve the coven of witches comprising Granny Weatherwax, possibly the most powerful witch on the Discworld, but then again maybe not, Nanny Ogg, matriarch of an extended and almost Mafioso-like family. Early volumes concerned themselves with the supremely inept but incredibly lucky Wizzard3 Rincewind. Occasionally Pratchett tries to kill him off by hurling him over the edge of the world or into the Dungeon Dimensions, but somehow he just keeps on coming back.

In addition to these vaguely humanoid life-forms, the Disc is populated with an incredible selection of trolls, dwarfs, elves, dragons, vampires, werewolves and zombies, all of whose existences can be beautifully explained by means of the terrifyingly complete internal logic of the Discworld.

The Discworld certainly has its fair share of religions. Although some of the actual gods do go in for the hurling of lightning bolts and natural disasters, there is room for all sorts on the Disc, and most of them spend their 'lives' largely unnoticed and eventually fade away, for to exist they require belief, and mundane creatures are a fickle lot when it comes to religion. Even the great god Om had to be content to manifest as a small one-eyed tortoise when his following dwindled to, well, one true believer.

Many of the old gods live high above the disc in their marble castle, Dunmanifestin, which sits atop Cori Celesti - a grey, ten mile high pillar of stony mountain. Occasionally they amuse themselves by playing games with the inhabitants of the world below.

Although some might say these characters share similar characteristics to gods, in fact they do not rely on belief as a means of existence - anthropomorphism4 simply exists for the same reason that anything else does.

One of the most endearing characters, central to many of the stories and peripheral in most, is Death, he of the skeleton and scythe, implacable and deadly and also somehow quaintly vulnerable. He sometimes rides out with the other Horsemen (or whoever is standing in for them that day), and is more-or-less ably assisted by his granddaughter Susan, his apprentice and the diminutive Death of Rats.

The Discworld has been brought to life on the small screen, with animated short films, and is also available in spoken form on CD and tape. Figurines of Discworld characters5 can be bought at many stockists or on-line.

Several Discworld computer games have been made, and maps of various Discworld places are available from good bookshops. Discworld calendars usually come up for sale around Hogswatch time6.

1His 24th Discworld novel, The Fifth Elephant, was released in November 1999.2The University of Wizards, situated in Ankh-Morpork.3His spelling is not that good.4The attribution of human characteristics to animals, objects or gods.5Made by Clarecraft with Terry Pratchett's approval.6That's Christmas to non Discworld folk.