The Origin of Terry Pratchett's Discworld Content from the guide to life, the universe and everything 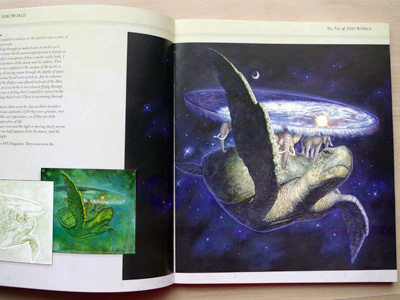 Terry Pratchett's Discworld is familiar to most of us through his wonderful Discworld books, of which there are now over 25 (at the time of writing). But where did Pratchett get the idea for such a world? And where did he first put it into print?

The other main contributor to Pratchett's Discworld was a 'classic' science fiction story by Larry Niven, Ringworld. Niven designed a giant world in the shape of a wedding ring with a radius of one astronomical unit. That is, the ring was the same diameter as the Earth's orbit around the Sun. The ring spun fast enough to generate artificial gravity on the inner surface and was warmed by a sun similar to our own at the centre of the ring. The inner surface of the ring was an artificial world with mountains, seas and forests, and a habitable area one million times that of the Earth.

In the book, four intrepid explorers of three different species travelled to this world to explore it: a type of extremely bad-tempered intelligent tiger, a two-headed three-legged alien and two Californian humans - a 200-year old man and an unnaturally lucky young woman. (All Larry Niven's humans are Californians.)

The world was explained in great detail with all the mathematics worked out so that the world would be consistent. In addition, Niven coined the terms 'Spinward' and 'Antispinward' to replace the directions of North and South.

The next stage in the evolution of the Discworld was Terry Pratchett's book Strata. Published in 1981, this was a spoof science fiction story based on Ringworld. Pratchett himself described the book as a 'p**stake/homage/satire' on Ringworld, and added that Larry Niven enjoyed it!

The book starts in almost exactly the same way, with three intrepid explorers of different species heading off into space to investigate a newly discovered world. The world they are investigating is an apparent contradiction in a logical universe. It is a flat disc, where all other worlds are spheres. Crash-landing on the world, they find it apparently the home of magical creatures such as winged devils. Further investigation shows the entire world to be an artificial construct, with the magic simulated by advanced technology.

This book is reasonably enjoyable in itself, but comes into its own when the reader has already read Ringworld. It lacks the laugh-out-loud jokes of Pratchett's later work, but is amusing nonetheless. In all likelihood, Stata would never have been successful were it not for the reflected glory of Pratchett's other works.

The Colour of Magic

Pratchett's first attempt at a spoof on the fantasy genre was a book called The Colour of Magic. Published in 1983, it consisted of four novellas set in the magical Discworld. This was the familiar flat disc set on the backs of four elephants standing on a giant turtle. While this looked similar to the world of Strata, it was a genuine magical world rather than a simulated construct. It brought together the flat magical world of Strata with the Hindu world myth.

The Colour of Magic is very much a spoof on the fantasy genre. Mainstream readers may find it less enjoyable than his later works, which, although set in a magical world, tend to give a slant on real-life issues. The book was successful enough to encourage Pratchett to write more in the same vein. A whole stream of Discworld books have followed. In fact, Pratchett has only rarely written books outside of the Discworld series since then, and has churned out two Discworld books a year!