Cats Content from the guide to life, the universe and everything 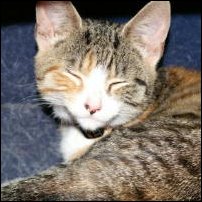 Cats are very probably one of the laziest life forms in the world.

They manage to sleep, or 'nap', approximately 85% of their lives, spending their short times awake eating, sleeping and leaving 'gifts' for the humans that think they own them.

Unlike the laziness of humanity, cats have made an art of getting humans to do just about everything for them, from feeding and providing shelter, to spending exorbitant amounts of money on habitats and toys, which the cats will then shun.

Similarly, if you expend blood, sweat and tears building a scratching post from pieces of wood salvaged from skips and carpet off-cuts 'borrowed' from the office, then you can guarantee that the ungrateful little psycho will decide that your leg is a far more desirable surface to scratch.

Cats have also elevated to a high art pickiness over what they will or will not eat. They will often turn up their noses at anything that could be bought for them without acquiring a second or third job, and then, when you have finally procured just the right morsel (mortgaging your house in the process), they decide that perhaps the first titbit that you purchased for mere pennies was exactly what they were after all along.

It is considered lucky if a black cat crosses your path. Whether this is true or not depends how superstitious you are.

They are noted for their shape-shifting abilities, transforming from a cute, cuddly bundle of joy to a hissing, spitting ball of claws and teeth faster than you can say 'Time for flea spray, Tiddles'. This is also a process observed when it comes to washing the said cat.

Cat washers fall into two philosophical schools, that of the ship-shape, neat and tidy idealists, and a somewhat larger and more cynical group who have had real world experience in washing cats. The cat comes equipped with some twenty long, sharp pointy claws and a willingness to use them at the first sign of trouble. As befits his jungle ancestry, he also sports a mouthful of fangs, evolved especially for the purpose of tearing apart prey, or the soap-bearing hand. Should such drastic action be deemed necessary, the first step in washing the cat is to immerse him in water, a substance most cats hate. A garden hose at 20 feet is most effective from a safety standpoint, though this method makes Step Two, the application of soap, all the more difficult.

Soap should be of the gentlest variety possible, both to avoid stinging the cat's eyes, and because he will run off before the final rinse. Little towelling is necessary, as the cat will rush to the top of the nearest tree, there to be blow-dried by the wind. Be sure to have plenty of coffee and cookies on hand to offer the firemen when they come to fetch him down.