Paul Kidby - Discworld Illustrator Content from the guide to life, the universe and everything 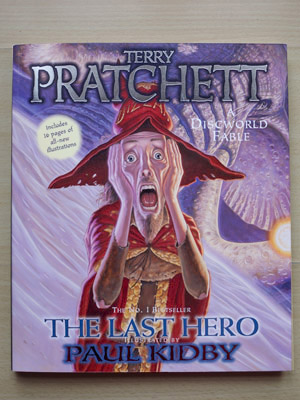 The cover of Terry Pratchett's 27th Discworld novel - Night Watch - is unlike any of the 26 that preceded it. The covers to the previous books were all painted by Josh Kirby, who died on the 23 October, 20011. Following his tragic and unexpected passing, another artist had to be found for the next cover. Fortunately one was available, and already obvious...

When a fantasy series is as long-running (the first Discworld book - The Colour of Magic - was published in 1983) and popular (Pratchett is believed to be the most shop-lifted author in Britain2) as the Discworld, then it tends to attract other talented people (and various hangers-on) who are inspired by the concept to create some associated work. Like Dave Greenslade - who wrote an album of music based on the Discworld; David Langford - who has written two quiz books on the subject (namely Unseen University Challenge and The Wyrdest Link); and Stephen Briggs3 - who has adapted some of the Discworld books into stage plays (and since had those adaptations published) as well as collaborating with Terry on three Discworld maps The Streets of Ankh-Morpork, The Discworld Mapp, and A Tourist Guide to Lancre, all the Discworld diaries to date, and Nanny Ogg's Cookbook. Or Bernard Pearson4 who creates sculptures of Discword buildings and scenes; he also sculpted the pieces of the Discworld board game Thud. However, none of these people have produced paintings based on the Discworld. Paul Kidby, on the other hand, has.

Will the Next Cover Artist Please Make Himself Known...

Josh Kirby's painting always had a comic style, which many of the fans felt did a disservice to the Discworld, and stripped the books of the sense of reality that Pratchett was aiming for. Paul Kidby's painting takes a more realistic line. While Kirby's depictions made you see the Discworld as a fantasy, Kidby's renditions seemed more believable, and so it is Kidby's take on various Discworld characters that most fans now have in their head as the 'right' one. Several fans are now trying to build up collections of Kidby's work, but it is known that the largest collector of Kidby art is Terry Pratchett himself. It seems that the man Pratchett is as much a fan of Kidby's art as Kidby is of Pratchett's books. He was, therefore, the obvious choice to take over from Josh Kirby.

Kidby's association with the Discworld began in 1995 when his company PJSM sold his first pencil print of The Librarian. Several other prints of Discworld characters (pencil and fully painted) were collected together a year later for The Pratchett Portfolio. It was at this point that he came to the attention of the majority of Discworld fans, and his paintings were praised for their adherence to the books and general quality. He later painted the map for the aforementioned A Tourist Guide to Lancre, and then collaborated with Terry in the design of the fourth Discworld map Death's Domain which he also painted.

The cover of Night Watch is, however, not the first book cover Paul Kidby has painted for Terry. His artwork has graced the cover (and inside) of Nanny Ogg's Cookbook and all the Discworld diaries so far produced (the first was for 1998). He also painted a really beautiful cover for The Science of Discworld5 which was followed a few years later by The Science of Discworld II: The Globe, though neither of these books are considered to be strictly part of the Discworld 'canon'. He recently illustrated The Last Hero throughout6, but as this book describes itself as 'a Discworld fable' it may not be true even within the context of the Discworld. And so Night Watch was the first Discworld 'canon' book that Paul Kidby painted the cover for.

The Cover of Night Watch

Kidby's work on the cover of this book is really quite clever. But you only realise quite how clever when you see the back of the book. On the back is a copy of Rembrandt's 1642 painting The Militia Company of Captain Frans Banning Cocq (Night Watch)7. By comparing the two paintings you can see that Kidby's composition is an almost exact copy of the Rembrandt. Every figure is in exactly the same position, every spear is pointing the same way, but everything has a Discworld tint to it:

All these are established Discworld characters placed in the context of a real-world painting. And there is one more. To the right of the patriot in Rembrandt's painting there is a head half-hidden behind someone's shoulder. That half-hidden head is Rembrandt himself. There's a partially obscured head in the same position in Kidby's painting. But this time it's the face of Josh Kirby - it's a nice homage to the artist of so many Discworld covers.

So Kidby has created a picture that is a conscious mirror of a real painting. And is therefore true to the very heart of the Discworld mythos.

It is the mirror of worlds, after all. 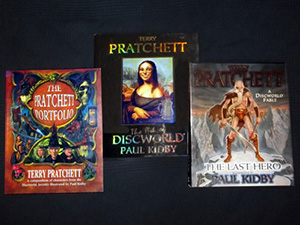 1Look here for an obituary.2A strange distinction to be sure, but nonetheless true, and testament to his popularity.3A man who will sell any Discworld merchandise he can lay his hands on, which has led to him being known as CMOT Briggs - a play on that great salesman of the Discworld 'Cutting My Own Throat' Dibbler.4Known in Discworld circles as Bernard the Cunning Artificer.5As with Night Watch Paul seems to have based this cover on an original painting. This time it was An Experiment on a Bird in the Air Pump painted by Joseph Wright of Derby in 1768.6In a similar vein to Josh Kirby's work on Eric several years before.7Apparently, it was Terry's suggestion to put the original painting on the back. In his own words: 'There's no point in the artist being clever if nobody notices.'