Lego Content from the guide to life, the universe and everything 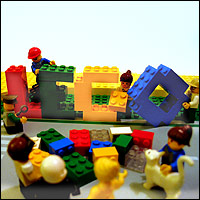 Lego is a toy for children of all ages, consisting mainly of small plastic bricks cunningly designed so that they stick together.

The name is a contraction of two Danish words, leg godt which translates as 'play well'. It started out in the early 1900s as a unique toy carved from wood by Ole Kirk Christiansen, developing after WWII into the Lego concept that we know today. The company is still family owned; in 2000 the head of the board is Keld Kirk Christiansen, Ole's grandson.

The basic bricks of various sizes and colours can be built into almost anything. There are commercial operations (Legolands) around the world consisting of entire villages and towns built from the little plastic bricks. With enough bricks, the child's - or the adult's - imagination is the only limit.

Throughout the years, Lego has developed from the basic building-bricks to kits which can produce dolls, battery-powered trains, radio-controlled cars, computer games and even robots. Many of these modern spin-offs are themed, for instance you can find Star Wars Lego which has been approved by director George Lucas himself.

Lego has won many awards for being a very creative toy, a challenging and stimulating alternative even to modern computer games.