Pere-Lachaise Cemetery, Paris, France Content from the guide to life, the universe and everything 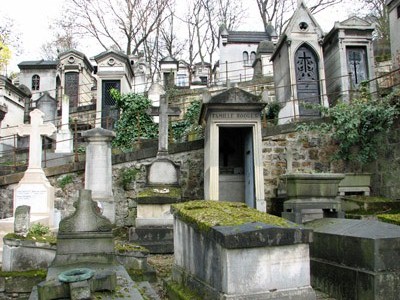 The cemetery at Père-Lachaise in the 20th Arrondissement of Paris is reputedly the most visited graveyard in the world, being the resting place of many famous Frenchmen and other inhabitants of Paris.

The cemetery was founded in 1804 by Nicholas Frochet, Prefect of the Seines district, as a solution to the problem of overcrowding in the city's cemeteries following the Revolution. The first man to be buried here was an anonymous bell-ringer from the local police station. In order to popularise the site, Frochet persuaded the civil authorities of Paris to transfer the remains of several famous Parisians to his new cemetery. Those first few were the writers Molière and La Fontaine, as well as the legendary lovers Abelard and Héloise.

Within a very short space of time, the cemetery was 'the place' to be buried in Paris, and the wealthy and famous clamoured to be buried within the 41-hectare site. Frochet's venture was so successful that he sold a burial plot back to the site's original owner for several times the price of the initial sale.

Being a civil graveyard, as opposed to one tied to a church, the rich were able to erect whatever monuments took their private fancy, and the grounds are full of great monoliths, private chapels and grand mausoleums. More recently, there has certainly been a toning down in the scale of monuments, and while plots are still expensive, there are gravestones from many denominations. Many of the tombs have fallen into disrepair as families have died out, but many are still beautifully looked after, and much of the cemetery's emotional impact is to be found in the contrast between new and well cared-for graves beside the falling and shattered tombs, their stained glass broken and their interiors covered in cobwebs.

The Cemetery is divided into 97 divisions, and within its wall are buried not only the wealthy, many of whom are now forgotten or consigned to the most obscure footnotes of history, but also a rich assortment of the famous, and sometimes infamous. See the links at the side of this entry for photographs of these graves.

Probably the two most famous graves here for British visitors are those of Jim Morrison (in the 6th division), and Oscar Wilde (in the 89th). Morrison's grave is now under 24-hour police guard following its notorious desecration by Nazi extremists some years ago, but it is still well visited and candles burn on it continuously. Wilde's grave was designed by Jacob Epstein and dates from 1911. Epstein had a niche inserted in it for his own ashes which were duly placed there in 1950. The grave was paid for by an anonymous admirer of the poet, playwright and wit. Regrettably, the piece was vandalised and its prominent penis was removed, although it was last seen acting as a paperweight in the cemetery director's office. One cannot help but that think Wilde would have been amused by this, however much one mourns for Epstein's design. The grave is now covered in graffiti, apparently written by Irish homosexuals paying tribute to the great man, and lipstick kisses.

Other well-frequented graves are those of the famous political paramour Colette (4th division), which is constantly adorned with fresh flowers, and those of singer Edith Piaf (97th Division) and the actress Sarah Bernhardt (44th Division). Surprisingly, the father of cinema, George Méliès, is in a neglected grave in the 89th division.

Not all of the interesting monuments belong to the famous, however: there are many spectacular graves in the Cemetery that don't have such glamorous occupants. The journalist Victor Noir is buried in the 92nd division. Shot by supporters of Napoleon the Third, his effigy sports a prominent erection, which over the years has been polished by the many young women who have come to see him as a fertility symbol, though one can only hazard a guess as to why his shoes are so highly polished as well. In the 86th division, one can see the monument to the lion-tamer Jean Pezon, riding the lion that ate him. Perhaps the monument that most characterizes the whole cemetery is the enormous tower that looms over the 48th division. It is easily the biggest monument in the grounds, and yet the name of the man who had it built has been lost to posterity.

One of the more interesting historical sights in the cemetery is the Mur des Fédérés, in the 76th division, the wall against which the last troops of the Paris Commune were executed in 1871. In an ironic display of l'Egalité, they are buried in the same graveyard as the man who ordered their shooting, Adolphe Thiers.

At the top end of the Mur des Fédérés, in a quiet corner of the cemetery, lies the 97th Division. Here are the memorials to the victims of Nazi atrocities during the occupation of France during the Second World War. These are memorials to the Jewish victims of the concentration camps - Dachau, Buchenwald, Sachsenhausen, Auschwitz, Bergen-Belsen and Mauthausen are all remembered here, marked with monuments that echo the horror of those dark and evil places. All are covered with small pebbles and stones, placed there to ensure that the victims of those dreadful places are never forgotten.

And as if these were not sufficient, there are monuments to the communists and the resistance fighters, Frenchmen who fought the Nazis and were sent to the camps themselves. The most shocking realisation about these is that they are not abstract memorials, as are seen in the UK, but monuments in a country where the fear was very real. There is a sense of real bitterness in some of the memorials to the resistance, captured and shipped to the camps by their own countrymen, the Vichy French government. It is a sobering and moving experience.

The nearest métro stations to the Cemetery are Gambetta, Père Lachaise and Alexandre Dumas. The Cemetery is open between 7.30am and 6pm daily, and admittance is free. Maps showing the locations of famous graves can be obtained from local shops and restaurants.