The Palace of Versailles, France Content from the guide to life, the universe and everything 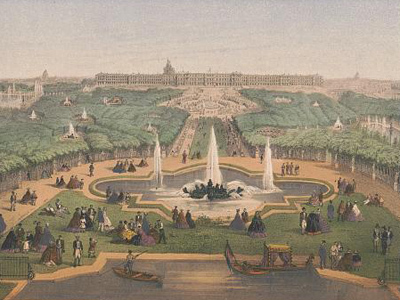 Louis XIV's magnificent Palace of Versailles lies some 20km to the southwest of Paris, and it remains one of the most impressive buildings of its age. Work began in 1664, with the architect Le Vau and the great landscape designer Le Notre beginning work that was not to be completed until 1715, shortly before Louis' death.

For Louis, the Palace served a dual function. Firstly it removed him from the Paris that he loathed, and it gave him a focal point for the personality cult that he and his chief adviser, Cardinal Mazarin, were to use to unify a fragmented French nobility throughout his reign.

It was at Versailles that Louis went from a King, with Droit de Seigneur (the God given Right to Rule), to being the apotheosis of both French and European royalty, the Roi du Soleil, the Sun King. Everywhere one looks in Versailles, the interior designer Le Brun used the sun motif with Louis' face at the centre; as door decoration, as wallpaper design and in a multitude of other places. The King's day was minutely scheduled, and nobles and dignitaries fought among themselves for the privilege of attending the King's rising, the King's breakfast and virtually every other part of the King's day. Fashions changed often and expensively, forcing those that might otherwise cause trouble by plotting against the throne to find ways of emulating the rest of the court or risk becoming a laughing stock. The King's privacy was minimal, restricted mostly to what time he could spend at the small Trianon Palaces in the grounds.

The Palace was briefly abandoned after Louis' death, but Louis XV re-occupied the Palace in 1722, and it remained the official residence of the Royal family until the Revolution of 1789. The Revolutionary government ransacked the Palace, selling all the furniture to raise money, and dispatching all the paintings to the Louvre. The building itself was left to rot, and was only saved from ruin and eventual demolition by Louis-Philippe, who donated substantial funds in 1837 to convert the Palace into a museum, parts of which still survive today.

In 1871 it was occupied by the national Government during the time of the Paris Commune, but serious work to restore the building to its former glory did not start until the years between the wars in the 20th Century. The final act of restoration was made in 1961 when a law was passed requiring all items taken from the Palace to be returned. The work still goes on today and a small section of the palace is given over to displaying newly-returned items.

The grounds cover only four square kilometres, but due to clever design they seem much larger. Near to the Palace are the impressive formal gardens, and the further one ventures, the more wild the gardens become. The centre-piece of the formal gardens are the magnificent fountains, but these only operate on certain days of the year, so it is worth checking dates before arranging visits.

The most famous features of the grounds, however, are the two Trianon Palaces. The Grand Trianon was designed to be Louis' country retreat, and although only a short distance from the Palace must have afforded Louis a precious respite from his own punishing regime. The Petit Trianon was designed as a retreat for Louis' favourite mistress, Madame La Pompadour.

For those not feeling like an extensive walk to the Trianon, there are alternative methods of transport. There is a petit train for 30FF, or for the more relaxed method, there are horse drawn calashes for 25FF.

The gardens themselves are free, except on days when the fountains operate, which usually coincide with French holidays. Music and fireworks are often laid on at the same time, and entry will cost you 30FF on those days.

The Palace is more complicated, having a variety of entrances depending on what you want to spend and see. Each is clearly labelled as follows:

A word of warning: If you are not booked into a party or individual tour, it is wise to get to Versailles early. It is an extremely popular attraction, and queues can be extremely long - up to three hours or so - thus restricting the time available to you to explore this fascinating part of French and European history.

The simplest way to get to Versailles from Paris is by train. Take one of the double-decker RER Line C trains, which also take Métro tickets. These tickets for all three zones will get you as far as Viroflay, where you will need to disembark and get an extension ticket to Versailles Rive-Gauche, which will cost you 14FF. Trains run every ten minutes or so, so you do not need to worry about waiting very long. Alternatively, through tickets may be purchased at any RER station.

Print courtesy of the Library of Congress