Constellations: Crux 'the Southern Cross' Content from the guide to life, the universe and everything 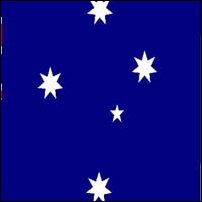 Crux is very well known to people in the Southern Hemisphere. Its five brightest stars appear on the national flags of several countries including Australia, New Zealand, Brazil, Samoa and Papua New Guinea. And the people of Bolivia celebrate the Feast Day of Achakana (their name for Crux) on 3 May.

Cross-shaped Crux is the smallest of the 88 internationally recognised modern constellations. It is surrounded on three of its borders by Centaurus 'the Centaur', with the most southerly edge shared with Musca 'the Fly'. Although Crux's area of the sky is tiny, it is a veritable treasure chest of deep-sky objects, even discounting the stunning view against the backdrop of an arm of the Milky Way.

Far back in recorded history, many different civilisations have revered this bright and distinctive group of stars. Over 2,000 years ago it was visible along the latitude where Jerusalem lies, 32° 05' North, but thanks to precession2, Crux can today only be seen from much further south.

Crux was originally part of Centaurus; it was listed as a separate constellation by Dutch astronomer Petrus Plancius in 1613.

A tribe of the Andes has a legend regarding Nemec, a chief hunter. He attempted to capture a Chokie (a large bird), but it flew away. Nemec threw his weapon (two connected stones) using all his strength. The bird was killed but its body remained in the heavens as the Coalsack Nebula, while the two stones became alpha and beta Centauri.

The scientific star names are simple to understand (if you know your Greek alphabet). For example: the 'alpha' star means it is the brightest star in that constellation. The next brightest is designated 'beta' etc. Combined with the genitive name, this is known as the 'Bayer designation'. Some stars have proper names as well; for example, alpha Crucis is Acrux. Others are known by their catalogue number.

Gacrux (gamma Crucis) is a binary star system comprising a red giant with a white main sequence (dwarf) companion. The system shines at second magnitude because it lies only 90 light years3 away.

If you draw a line with your finger from Gacrux to Acrux at the bottom of the cross, carry on through and you will be pointing towards the south celestial pole (now in Octans). This navigational knowledge was a priceless boon to ancient mariners.

There is an unusual binary system in Crux, consisting of a pulsar and a Be-type4 star. Astronomers have dubbed this pair the 'Odd Couple' because nothing like this system has been recorded before. The pulsar is known as PSR B1259-63 and it takes 3.4 years to orbit its partner LS 2883. When the pulsar skims around the blue giant, gamma-ray flares are detected.

The NGC was compiled by John Louis Emil Dreyer (director of the Armagh Observatory from 1882 - 1916).

Kappa Crucis nestles among NGC 4755, a ten-million-year-old open cluster containing over 100 stars, and more than 6,400 light years distant. John Herschel (son of William) described it as 'a casket of variously coloured precious stones'. Kappa is a red supergiant (showing as orange through Herschel's telescope) and set among many blue companion stars. The Kappa Crucis Cluster has been called 'Herschel's Jewel Box' in his honour.

Sir Patrick Moore has compiled his own list of targets for amateur astronomers, and called it the 'Caldwell Catalogue'. Crux boasts three of his featured objects: the Coalsack nebula and two of the open clusters, NGC 4755 and NGC 4609.

The Coalsack (Caldwell 99) is a dark nebula that was first documented by the Portuguese navigator Vicente Yáñez Pinzón in 1499. Covering an area of 26 square degrees, it spills over the borders of Centaurus and Musca.

The Coalsack Nebula is 600 light years distant, but visible to the naked eye because it appears as a gap in the arm of the Milky Way. The dark nebula is not as black as coal, it shines with a dull twinkle due to the glow of surrounding stars. Other names it has been given historically include the Black Magellanic Cloud and Macula Magellani (Magellan's Spot).

The space debris which creates a meteor shower comes from the tail of a comet as the Earth crosses where the comet passed previously on its own orbit. Imagine a trail of breadcrumbs, or sawdust like that used in hashing.

The meteor shower connected with this constellation is called the Alpha Crucids, and happens at around the end of January. The ZHR (Zenithal Hourly Rate) is classed as medium, with the display producing bright meteors and fast fireballs.

Some extrasolar planetary systems have been found in the constellation Crux. One planet, HD 108147 b, is a gas giant that is less than half the mass of Jupiter. It is so close to the star – just 0.1 AU (9.3 million miles or 15 million km) away – that life as we know it would be impossible. The planet's orbit around the star (what we know of as a year) takes just under 11 days.

The gas giant planet HD 106906 b orbits its star at 654 AU. Such a distance has not been encountered by exoplanet hunters before; the planet shouldn't exist. Doctor Who fans have petitioned the IAU to name the planet Gallifrey after the homeworld of the Time Lords, but that request won't be honoured by the IAU.

1Current IAU guidelines use a plus sign (+) for northern constellations and a minus sign (−) for southern ones.2The gradual wobble of the Earth upon its axis, caused by the combined gravitational influences of the Sun and Moon.3A light year is the distance light travels in one year, roughly 5.88 trillion miles or 9.46 trillion km.4Hot blue giant star.5A brown dwarf is a star which is too small to fuse hydrogen but shines in the infra-red region by deuterium fusion and by gravitational heating.