Constellations: Ursa Minor 'the Little Bear' Content from the guide to life, the universe and everything 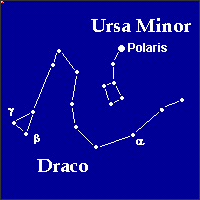 A hugely useful, informative and entertaining book, the standard reference work for all those struggling to make it from one part of the universe to another part of the universe on as little as 30 Altairian dollars a day. It's published by Megadodo Publications (situated on the planet Ursa Minor Beta1) and is available through many reputable (and even more disreputable) booksellers throughout the galaxy.
–  Douglas Adams describing the titular tome of his essential read The Hitchhiker's Guide to the Galaxy.

Ursa Minor is a circumpolar constellation containing the north celestial pole; it shares the top spot with neighbours Cepheus 'the King' and Camelopardalis 'the Giraffe'. Beneath Ursa Minor is Draco 'the Dragon', which accounts for around three quarters of its border.

When the stars of Ursa Minor are joined up in one's imagination, it looks like a smaller, fainter version of the 'Plough' (Big Dipper) asterism contained within Ursa Major 'the Great Bear', so it's relatively easy to spot. Ursa Minor is sometimes known as the 'Little Dipper' for just this association with its larger brother.

There are no Messier objects in Ursa Minor, but there is a remarkable isolated neutron star and some extrasolar planetary systems. For the deep-space enthusiast there are a few galaxies to seek out, including the elliptical Ursa Minor Dwarf galaxy, a satellite of the Milky Way.

In February 2008, NASA announced that 'Across the Universe' by The Beatles was going to be 'beamed' into outer space towards the 'North Star' Polaris as part of NASA's 50th anniversary celebrations. Appropriately, it is also the 40th anniversary of the track being recorded by the Fab Four. Sir Paul McCartney wholeheartedly approved, relaying the wish for NASA to 'give his love to the aliens' and wishing the project 'all the best'. Yoko Ono, widow of John Lennon, said:

I see this as the beginning of the new age in which we will communicate with billions of planets across the Universe.

According to the Greek myth, the great god Zeus had a dalliance with Callisto, the daughter of King Lycaon of Arcadia. She bore him a son and named him Arcas. King Lycaon did not believe his daughter when she claimed that the child's father was Zeus, so he invited Zeus to join them for a meal. The meat Zeus was offered was the sliced flesh of the infant Arcas, who had been killed earlier on the instructions of the goddess Hera, Zeus's jealous wife.

Zeus did not relish having his son served up on a silver platter and took his revenge by killing King Lycaon's own sons. Then he gathered up the slices of Arcas, reformed him, and then revived him. When he was a normal baby again, Zeus handed the child over to Atlas's daughter Maia3 to raise.

To keep Callisto safe from Hera, Zeus turned his lover into a bear. One day, when Arcas was grown, he was out hunting when the bear rushed to embrace him. Thinking he was being attacked, Arcas tried to kill the bear, not knowing it was really his mother. Callisto raced to the Temple of Zeus to appeal on their behalf and Zeus placed them both in the heavens, Callisto as Ursa Major and Arcas as the constellation Ursa Minor.

The Wet-nurses of Zeus

The great god Zeus was once a baby, and he was suckled by various wet-nurses, including a sacred goat named Amalthea and a nymph called Cynosura who hailed from the Ida Mountains of Crete. In some stories she is called simply 'Ida' after her home. An alternative myth states that when she died, Zeus rewarded Ida by placing her image in the heavens as the constellation Ursa Minor.

The Navajo and Cherokee people had their own stories to explain the workings of the heavens. In the days before there were people, animals couldn't find their way home at night, so they asked the Great Spirit for help. The Great Spirit listened and then placed a bright stone in the night sky which became the pole star that would always lead them home.

The scientific star names are simple to understand (if you know your Greek alphabet). For example: the 'alpha' star is the brightest star in that constellation. The next brightest is labelled 'beta', etc, this is known as the 'Bayer designation' after the man who introduced the method. Some stars have proper names as well, for example, alpha Ursae Minoris is Polaris. Others stars are known by their catalogue numbers. Pherkad Minor (11 Ursae Minoris) is one of the few stars that have a proper name but no assigned Greek letter.

Anchoring the constellation to within one degree of the north celestial pole is Polaris, a second magnitude supergiant. The alpha star has two distinct companions which have been imaged by the Hubble space telescope, confirming the Polaris triple star system. Other stars are suspected, making the Polaris system a possible open cluster.

Polaris appears to remain stationary from our vantage point because it is lined up with the Earth's axis, so all the other stars seemingly revolve around it (diurnal motion). This makes Polaris our 'pole star', but it will not always be so. We know the Earth wobbles slightly on its axis4 and over a period of 25,700 years (precession) the 'pole star' will change. Kochab (beta Ursae Minoris) was closer to the North celestial pole 3,000 years ago than Polaris was! Polaris will lose its title to Alrai, (gamma Cephei), in the early 31st Century.

The great bard William Shakespeare did not know about precession when he wrote Julius Caesar:

But I am constant as the northern star, of whose true-fixed and resting quality there is no fellow in the firmament.
- Act 3, scene 1

Beta (Kochab) and gamma (Pherkad) are collectively known as the 'Guardians of the Pole'.

The closest neutron star to Earth found so far has been detected by NASA's Swift satellite. Lying between 250 and 1,000 light years5 away, this is only the 8th-discovered isolated neutron star. It has been given the temporary name of 'Calvera' after the villain in the film The Magnificent Seven.

The seven previously known isolated neutron stars are known collectively as 'The Magnificent Seven' within the community and so the name Calvera is a bit of an inside joke on our part.
– Co-discoverer Derek Fox of Penn State.

The NGC was compiled by John Louis Emil Dreyer, the director of the Armagh Observatory from 1882 to 1916. NGC 621 is a barred spiral peculiar galaxy, also catalogued Arp 185. Spiral galaxy NGC 3172 is the closest NGC object to the North celestial pole, therefore it was given the name Polarissima Borealis. A supernova (death of a giant star) was detected in the spiral galaxy NGC 6324 in 2002. Some stars6 in our own galaxy are big enough to go supernova, but they're so far away it would take thousands of years for the fallout to affect our solar system.

The debris which creates a meteor shower comes from the tail of a comet, as the Earth crosses where the comet passed previously on its own orbit. Imagine a trail of breadcrumbs, or sawdust like that used in hashing. The Earth crosses this debris trail at the same time every year, giving us the display on roughly the same date. Meteor showers are usually named after the constellation from which they appear to hail, or a nearby star. The meteor showers associated with this constellation are called the Ursids. They are classed as 'moderate activity', appearing between 17–25 December, with the maxim being around 22 December. Meteors can be seen on any night of the year providing conditions are perfect for viewing, but checking an astronomy calendar for expected meteor shower maxims greatly increases your chances of catching a spectacular display.

Over 2,000 years ago, the Greek philosophers Aristotle and Epicurus argued about whether there were other Earth-like planets orbiting distant suns. Now we know that there are many extrasolar planets, some of which might even be capable of sustaining life.

HD 150706 is an 7th magnitude yellow main sequence (dwarf), not much smaller than our own sun and it's a mere 88.7 light years away. The planet, a gas giant exactly the same size as Jupiter, has an eccentric orbit varying from 0.5 AU7 to 1.13 AU, giving a mean distance of 0.82 AU. This planet resides in the system's habitable zone, but because it is a gas giant it isn't a candidate for the possibility of extra-terrestrial life. However, should the planet have a rocky  moon with enough gravity to retain an atmosphere, then that could be a distinct possibility.

11 Ursae Minoris b has a circular orbit around an orange giant star. The object has an extremely large mass which some astronomers think may denote a brown dwarf (failed star) rather than a planet.

Figures given in the table below are the length of the planet's orbital period around its parent star, a measzre we know as a year. The mass of the extrasolar planet is compared to that of Jupiter, our solar system's largest planet. Astronomers call this the 'Jovian scale'.

1This is a fictional planet.2Current IAU guidelines use a plus sign (+) for northern constellations and a minus sign (−) for southern ones.3One of the Pleiades, Maia has her own star, 20 Tauri, named after her.4This is caused by the combined gravitational influences of the Sun and the Moon.5A light year is the distance light travels in one year, roughly 5.88 trillion miles or 9.46 trillion km.6Such as Betelgeuse, alpha Orionis.7Astronomical Units.