Constellations: Bootes 'the Herdsman' Content from the guide to life, the universe and everything 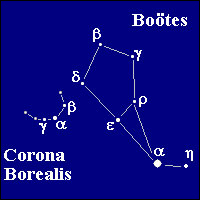 The Great Hyperbolic Omni-Cognate Neutron Wrangler, said Deep Thought, thoroughly rolling the Rs, could talk all four legs off an Arcturan1 MegaDonkey – but only I could persuade it to go for a walk afterwards.
–  Douglas Adams' essential read The Hitchhiker's Guide to the Galaxy.

Boötes (pronounced boh-oh-teez) the Herdsman3 is one of Ptolemy's 48 original constellations, so it is classified 'ancient'. Following the 'arc' of the handle of the Big Dipper (going away from the bowl) you will land right on Arcturus (alpha Boötis). Therefore, 'arc to Arcturus' the saying goes - followed by 'spike to Spica', because straight 'down' from Arcturus you will land on Spica in Virgo.

Boötes is kite-shaped and shares borders with (clockwise from the north) Draco, Ursa Major, Canes Venatici, Coma Berenices, Virgo, Serpens Caput, Corona Borealis and Hercules. Surprisingly for such a large area (it is the 13th-largest constellation) there are no Messier objects. Interestingly, there is a rather huge mysterious 'nothing' (absence of galaxies) called the Boötes Void.

This 'supervoid' was discovered in 1981. It is more than a billion light years4 from us and measures almost 350 million light years in diameter. There are many theories about the Boötes Void; it remains an enigmatic mystery and popular science fiction topic.

According to the Greek myth, the great god Zeus had a dalliance with Callisto, the daughter of King Lycaon of Arcadia; and she bore a son who she named Arcas. King Lycaon did not believe his daughter when she claimed the child's father was Zeus, so invited Zeus to join them for a meal. The meat offered to Zeus was unusual - it was in fact the sliced and diced flesh of the infant Arcas, who had been killed earlier on the instructions of the goddess Hera, Zeus' jealous wife.

Zeus did not relish having his son served up on a silver platter and took his revenge on King Lycaon by killing his sons. He then gathered up the body parts of Arcas and put him back together, before handing the child over to Atlas' daughter Maia5 to raise.

To keep Callisto safe from Hera, Zeus turned Callisto into a bear. When Arcas grew up he was out hunting one day when the bear rushed to embrace him. Thinking he was being attacked, Arcas determined to kill the bear, not knowing it was really his mother. Callisto raced to the Temple of Zeus to appeal on their behalf and Zeus placed them both in the heavens: Callisto as Ursa Major and Arcas as the constellation Boötes the Herdsman.

Another version of the tale has a slightly different ending: the mother and son are transformed into Ursa Major and Ursa Minor. In this version, Boötes honours the herdsman who invented the plough. This so delighted Ceres, the goddess of agriculture, that she arranged his reward with Zeus: his own constellation, rotating the heavens for eternity.

The scientific star names are simple to understand (if you know your Greek alphabet). For example, 'alpha Boötis' means it is the brightest star in the constellation Boötes. The next brightest is designated 'beta' etc. This is known as the 'Bayer designation'. Some stars have proper names as well, for example, alpha Boötis is Arcturus. Others are known by their catalogue number.

Arcturus is a first magnitude orange giant at just 36 light years distant. It is one of the brightest stars in the northern hemisphere of the celestial globe and the fourth-brightest star in the sky overall. Arcturus means 'bear guardian' in Greek; it was known by Homer, Hesiod and Ptolemy. In this fabulous Astronomy Picture of the Day image, Arcturus is in the centre of the picture between Jupiter and 'The Plough' asterism (part of the constellation Ursa Major).

The NGC was compiled by John Louis Emil Dreyer (director of the Armagh Observatory from 1882 - 1916). NGC 5548 is a Seyfert galaxy. These types of galaxy, identified in 1943 and named after their discoverer Carl Keenan Seyfert, have an intensely bright, compact and highly active nucleus, caused by a supermassive black hole at their core.

NGC 5466 is the only globular cluster in Boötes. It was discovered by William Herschel in May 1784, who catalogued it H VI.9.

Many galaxies are viewable in the direction of Boötes6, including the stunning edge-on spirals NGC 5529 and NGC 5689.

The Earth passes through the debris field at such an angle that the shower is extremely short (just a few hours). But it is a good show if you catch one; the ZHR (Zenithal Hourly Rate) is over 100 per hour.

In the early hours of 4 January, 2008, the Quadrantid meteor shower was viewed from the air and the image also captured a gorgeous green   aurora.

Several extrasolar planetary systems have been found in the constellation Boötes; the first was discovered in 1997.

The nomenclature that has been decided upon for planets is to use a lower-case letter after the parent star catalogue number (or name) eg, 'Tau Boötis A b'. This stays with the planet regardless of whether further discoveries are subsequently made within the same solar system, and despite the position of the new planet relative to the star. Therefore, the first-discovered planet of HD 128311 is HD 128311 b, and HD 128311 c was detected later.

The planet HD 128311 b is in the system's 'Goldilocks zone' (habitable zone), but as a gas giant is not a candidate in the search for extra-terrestrial life. However, should the planet have a rocky moon with enough gravity to retain an atmosphere, that would make it a distinct possibility.

The figures given in the table below are the length of the planet's orbital period around its parent star, which we know of as a year. The mass of the extrasolar planet is compared with that of Jupiter, our solar system's largest planet, known to astronomers as the 'Jovian scale'.

SCP 06F6 was discovered on 21 February, 2006, by the Hubble Space Telescope, where nothing had been on 29 January. This means it brightened by a factor of over 200. Thought originally to be a supernova, it kept growing brighter for too long, around 100 days. Normal supernovae reach peak brightness between 20 and 30 days after the explosion then begin to fade. One explanation of the 100-day brightness is distance, but a 100-day stretched-event would mean the object is approximately 12 billion light years away, and the explosion was too bright for this distance to be possible. Besides, its colour did not change from when it was first observed to when it faded; normally, temperature change after an explosion would register different colours. Despite extensive studies, astrophysicists cannot match up its spectral lines with any known elements. As astronomers cannot match the object to any known class of celestial object, therefore (for the time being) it represents a new class. Speculations abound, including 'the explosion of a carbon star' and 'the collision of a white dwarf with a black hole'.

While this article is primarily about the constellation Boötes, the author thought you might like to see some of the other instances where Boötes has appeared.

1Arcturus is the common name for alpha Boötis.2Current IAU guidelines use a plus sign (+) for northern constellations and a minus sign (−) for southern ones.3There are many job descriptions for this character. Homer called him 'the Wagoner', with Ursa Major as the wain (open farm wagon). Others are 'Bear Watcher', 'Bear Guard', 'Ploughman' and 'Ox-driver'.4A light year is the distance light travels in one year, roughly 5.88 trillion miles or 9.46 trillion km.5One of the Pleiades, Maia has her own star, 20 Tauri, named after her.6The galaxies are much further away than the stars which make up the constellation, which are in our own galaxy.7This means 75 million light years.8Fortunately, this event was witnessed and recorded by people in China, Japan and Korea.9Played by Steve Ihnat.