Constellations: Phoenix 'the Mythological Firebird' Content from the guide to life, the universe and everything 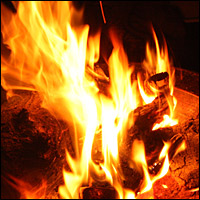 The southern constellation Phoenix2 is one of a dozen constellations delineated by Dutch astronomers Pieter Dirkszoon Keyser and Frederick de Houtman during their voyage to the southern seas between 1595 and 1597 on board the Hollandia. They drew up five3 star patterns to represent birds: Phoenix; Grus (the crane); Apus (bird of paradise); Pavo (the peacock); and Tucana (the toucan).

Phoenix made its debut in the 1603 Uranometria of Johann Bayer, who drew it as a firebird. But historically it has also represented the griffin and the ostrich. Bordered by Fornax, Sculptor, Grus, Tucana and Eridanus, there are no Messier objects, and only a few deep-space NGC items to report. However, there are some interesting features, including an historical meteor shower connected to a mysterious comet first recorded in 1819, and some exciting extrasolar planet discoveries bringing us bang up to date.

Phoenix is a modern constellation, so there is no ancient mythology attached to it. However, there are plenty of legends about the phoenix bird which the star pattern honours. The Chinese know the phoenix as the magical 'firebird', a beautiful creature which lived to between 100 and 1,000 years, and was then consumed by fire. From the ashes, a brand new bird emerged; a perpetual cycle of life, death and rebirth. In Feng Shui the phoenix is a symbol of good luck which dates back 2,000 years.

The scientific star names are simple to understand (if you know your Greek alphabet). For example: the 'alpha' star means it is the brightest star in that constellation. The next brightest is designated 'beta' etc. Combined with the genitive name, this is known as the 'Bayer designation'. Some stars have proper names as well, for example, alpha Phoenicis is Ankaa. Others are known by their catalogue number.

Alpha Phoenicis, Ankaa ('head of the phoenix'), is an orange giant star which has a companion, although so little is known about it that it is not even classified. Ankaa can be located in the northern hemisphere by star-hopping from the asterism the 'Great Square' of Pegasus, but you need an uninterrupted view of the horizon.

Nu Phoenicis is of interest because, not only is it the closest star of this constellation to us (at just 49 light years4 distance), but of a similar stellar make-up to our Sun - and it has a dust disk.

Delta Phoenicis is a binary system. Delta2 Phoenicis is a yellow sub-giant which has a planet in its habitable zone (see Extrasolar Planets section below).

The NGC was compiled by John Louis Emil Dreyer (director of the Armagh Observatory from 1882 to 1916).

NGC 625 is a barred spiral galaxy. One of the outermost members of the Sculptor Group, it is 13 million light years distant but shines +11 magnitude - so telescope owners in the southern hemisphere should be able to track this beauty down.

Robert's Quartet is a collection of four galaxies in the process of merging. The group is 160 million light years away and the members, which each have their own individual NGC number, average +14 magnitude. NGC 92 is the largest component; one of its already-distorted spiral arms is 100,000 light years in length.

Our Milky Way galaxy is part of the 'Local Group' that contains lots of galaxies. Ours is a spiral, along with the grand design Triangulum Galaxy (M33) and the Andromeda Galaxy (M31), which has two companion elliptical galaxies, M32 and NGC 205. The rest of the local group are either elliptical or irregular like the Magellanic Clouds. Some are dwarf galaxies, including the Phoenix Dwarf which measures just a few thousand light years across, and lies 1½ million light years from the Milky Way.

Discovered at the ESO (European Southern Observatory) by German astronomer Hans Schuster and Richard West in 1976, it was given the designation PGC 006830 (Principal Galaxies Catalogue) after its original classification of 'globular cluster' ESO 245-G 007 was proved incorrect. At first glance the Phoenix Dwarf galaxy looks more like an open (or globular) cluster of stars. But, after further research, it is now considered to be in transition between a dwarf spheroidal and a dwarf irregular galaxy.

The space debris which creates a meteor shower comes from the tail of a comet as the Earth crosses where the point the comet has passed previously on its own orbit. Imagine a trail of breadcrumbs, or sawdust like that used in hashing. The comet in this case is D/1819 W1 (Blanpain), now officially recorded as a 'lost periodic comet', which means it has not returned when it was expected. One possible explanation is that an error was made during the calculation of its orbit when it was first discovered in 1819.

The meteor shower connected with the comet is called the Phoenicids, which was first recorded on 5 December, 1956, when 61 meteors were noted. The display produced a number of bright meteors, with the mean brightness being +2.4 mag. There was then a gap until 1972, and meteors were also noted in 1973, 1976, and 1977, although the maximum was a rather disappointing five per hour.

There had been several extrasolar planetary systems found in this constellation; the first was discovered in 2000. Figures given in the table below are the length of the planet's orbital period around its parent star, which we know of as a year. The mass of the extrasolar planet is compared with that of Jupiter, our Solar System's largest planet, known by astronomers as the 'Jovian scale'.

The most interesting, from our point of view, is Delta2 Phoenicis, a yellow sub-giant star which is 67 light years distant. Fairly inconspicuous in itself, it just happens to have a gas giant planet, Delta2 Phoenicis b, orbiting in its habitable zone. Obviously not a candidate for extra-terrestrial life itself, any moons that it may have which possess enough gravity to retain an atmosphere could be a distinct possibility. Speculation about any inhabitants has already been mentioned in the light-hearted Entry 'Broadcasting to our Galactic Neighbours'.

While this Entry is primarily about Phoenix the constellation, the author thought you might like to read about some other phoenix connections.

The word 'phoenix' derives from the root phoînix which is Greek for 'purple'. Many centuries ago, the colour purple was revered because it was a pigment that could not be created easily. In some societies only persons of high esteem were allowed to wear the venerated colour, like members of the royal family or Roman emperors.

One race of people found a way of creating a purple dye - a gross process involving crushing and steeping molluscs. The knowledge of how to create this dye, which in Roman times was worth its weight in silver, earned the people the name Phoînikes (Phoenicians). The shade Tyrian purple5 was named after the Phoenician city of Tyre where it was first created.

The exalted firebird was thus portrayed as covered in purple and gold feathers to reflect the esteem of the royal colour and acknowledgement of the parent - the Sun.

Outlines of the phoenix are found on ancient gravestones and tomb walls in many cultures to signify the belief that the soul lives forever. Early written references include stories by Hesiod in 8BC and Greek historian Herodotus of Halicarnassus in 5BC.

There is no phoenix firebird in nature, because the creature exists only in stories and poems such as The Phoenix and the Turtle by William Shakespeare, who was always one for a tragic love story. However, there is a Phoenix palm tree and an ancient Japanese breed of ornamental chicken called Golden Phoenix, with black and gold feathers.

There are so many instances of 'Phoenix' that it would be impossible to mention them all, so here are just a few:

The appropriately named Project Phoenix rose from the ashes of a NASA initiative to search for extraterrestrial intelligence after funding was withdrawn by US Congress in 1993. The Arecibo radio telescope in Puerto Rico, and Jodrell Bank, Cheshire, studied 800 nearby stars over the following decade. By March 2004 no signals had been detected, prompting the Phoenix team leader, Peter Backus of the SETI institute, to comment:

Conclusion: we live in a quiet neighbourhood.

1Current IAU guidelines use a plus sign (+) for northern constellations and a minus sign (−) for southern ones.2Pronounced FEE-nicks.3The other seven were Chamæleon; Dorado; Hydrus; Indus; Musca; Triangulum Australe and Volans.4A light year is the distance light travels in one year, roughly 5.88 trillion miles or 9.46 trillion km.5Also known as 'Imperial purple' and 'Royal purple'.