Harry Potter Content from the guide to life, the universe and everything 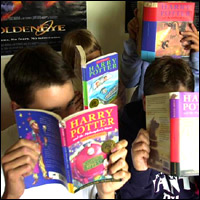 The Harry Potter books, written by JK Rowling, are achieving a not inconsiderable reputation. All books in the series have received numerous awards and the fourth book Harry Potter and the Goblet of Fire forced The New York Times to change its listing of bestsellers so that 'adult' novels could make the list again with Rowling's books relegated to a 'children's book' category. Some conservative American religious organisations have protested and even burned copies of the books because of the references to witchcraft and wizardry.

Primarily, the books are considered children's books, but adults also adore them. Limited edition 'grown-up' covers of the books were released as adults didn't want to be seen reading children's books while commuting. Parents have been known to argue over who gets to read the stories to their children. And, despite all the hype, the books are actually very good. Read on for the story of a certain young wizard...

Just Who is this Potter Boy?

Harry Potter was a perfectly ordinary 11-year-old boy. He lived at number four, Privet Drive with the Dursley family. His parents, he had been told, had died in a car crash, and as a result he lived with his Uncle Vernon, Aunt Petunia, and the disgusting little fat boy Dudley. Then he discovered he was a wizard, and was whisked away to Hogwarts School of Witchcraft and Wizardry, where he makes new friends, new enemies, and has a whole bunch of exciting adventures. See the character profiles below for more information.

The Magical World of Harry Potter

A whole host of characters appear in the books. Here are some of them:

The books play host to a whole bunch of weird stuff:

Harry Potter and the Philosopher's Stone

The first book in the series. Harry discovers he is a wizard and is whisked off to Hogwarts. He finds out about his past, and makes plenty of new friends and enemies. Something is going on at Hogwarts, and part of the third floor has been blocked off. Eventually the plot is unravelled, with plenty of surprises and plot twists along the way.

Harry Potter and the Chamber of Secrets

The second book. After returning to Hogwarts via flying car, Harry finds that some very weird stuff is going down. Who does the disembodied voice Harry keeps hearing belong to? Who is attacking Hogwarts pupils, leaving them immobile and statue-like? What is the mysterious 'Chamber of Secrets'? All these questions are answered with yet more plot twists and shenanigans along the way. This book also explores racism. Malfoy and his friends take to abusing people with Muggle backgrounds like Hermione, calling them 'Mud-Bloods'. And all those who are attacked are Mud-Bloods...

Harry Potter and the Prisoner of Azkaban

The third book. Harry runs away from the Dursleys after magically inflating his nasty Aunt Marge. He gets back to Hogwarts to find it guarded by the ultra-creepy Dementors, who have a strange effect on him. One of the Azkaban prisoners, Sirius Black, has escaped. He worked for Voldemort and rumours say he is going for Harry. Plenty more fun and frivolity plus a plot twist in Chapter 18 the size of New York.

Harry Potter and the Goblet of Fire

The fourth book in the series, and a hefty 636 pages long, Harry Potter and the Goblet of Fire has been proclaimed by many as the best yet. It contains the tricky situations, gripping cliff-hangers and amazing plot twists regular readers have come to expect. Many new characters are introduced, including Winky, a house-elf, Mr Crouch and Mr Bagman of the Ministry of Magic, leprechauns, and two foreign wizarding schools. Describing the plot is difficult, as there are so many surprises that one wouldn't want to spoil. Suffice to say, there is a Quidditch World Cup Final match between Bulgaria and Ireland, and a magical tournament. And an important character dies. Towards the end, a major event takes place which changes everything.

Harry Potter and the Order of the Phoenix

If you thought the previous one was long, JK Rowling extends this fifth Potter book to a whopping 766 pages. After the events of ...Goblet of Fire, it is clear to Harry that Voldemort is growing in power. Unfortunately, the Ministry of Magic refuse to believe him, taking the whole story to be a plot by Dumbledore to seize political power. As a result, the Ministry instigates measures to discredit Harry as an attention-seeking storyteller. To make matters worse, they install the appalling Dolores Umbridge as the new Defence Against the Dark Arts teacher, who gradually increases her power over the whole of Hogwarts. While all this is going on, the eponymous Order - a collection of anti-Voldemort wizards gathered together by Dumbledore - are doing their best to fight the rising dark army. With Harry's dreams increasingly being invaded by Voldemort, it seems that he's the only one who can really see what's happening and is determined to do something about it. But at what cost..?

Harry Potter and the Half-Blood Prince

Dolores Umbridge may have been removed from Hogwarts, but Harry's troubles are far from over. To make up for being rather distant last year, Dumbledore finally takes Harry into his confidence and gradually tells him the story of how Voldemort originally came to power. At the same time, Harry becomes obsessed with an old Potions textbook he finds, which has annotations by someone calling himself the 'Half-blood Prince'. As the novel nears its climax, Harry and Dumbledore set out on the first part of a critical mission that could see the end of Voldemort once and for all. When they return, however, Hogwarts has become a battlefield. By the time the battle is over, the Prince has revealed himself and there is another tragedy for Harry to face, as a major character leaves the series for good.

Harry Potter and the Deathly Hallows

The final book in the series sees Harry trying to complete the mission that he and Dumbledore started in the previous book. Along the way he gets sidetracked by the Deathly Hallows: three magical items with the power to give their owner mastery over death. This last episode sees an explosive return to a location from the very first book, a chance for Harry to visit his parents' graves, and a final epic showdown with Voldemort himself. JK Rowling doesn't hold back this time, and ...Deathly Hallows sees the untimely end of several major and minor characters. Does that include Harry? You'll have to read it to find out...

The Harry Potter franchise has been successfully transferred to the big screen. Starting with 2001's Harry Potter and the Philosopher's Stone, all eight films2 have been major box office successes.

1We have tried to avoid spoiling surprise twists in these reviews. Any complaints should go to the Forum just below this footnote.2Harry Potter and the Deathly Hallows was released in two parts, in 2010 and 2011.