Constellations: Cancer 'the Crab' Content from the guide to life, the universe and everything 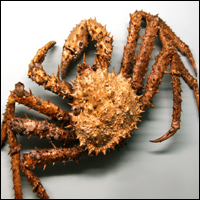 Thereafter a light among them brightened,
So that, if Cancer one such crystal had,
Winter would have a month of one sole day.
- Dante Alighieri alluding to Cancer's faintness and high position in Paradiso.

Cancer the Crab is one of Ptolemy's original 48 constellations, so it is classified as 'ancient'. Cancer is the faintest of the zodiacal constellations, with no star brighter than fourth magnitude. Shaped like an upside-down 'Y', it can be found between Leo and Gemini, with Hydra below and Lynx above. The ancient Egyptians knew this constellation as Scarabaeus (the Scarab), which was their emblem of immortality.

Cancer is particularly noteworthy for housing Praesepe (aka the Beehive Cluster), catalogued Messier 44, and an extrasolar system containing five planets has been discovered surrounding one of its stars.

The constellation honours the crab which the goddess Hera sent to annoy Hercules during one of his 12 labours. Hercules was the son of the great god Zeus, Hera's younger brother and husband, and there was no love lost between them. Hera hoped the crab's nip would distract Hercules long enough for the Hydra to win their battle, but instead the crab got stepped on and crushed. The unusually grateful Hera rewarded the crustacean with its own constellation in the heavens, just above the defeated Hydra.

According to some ancient folklore, Cancer was the 'Gate of Men' through which the souls of men descended from heaven to human bodies. Chinese mythology named it Tsei She Ke, literally 'the Exhalation of Piled-up Corpses'.

The scientific star names are simple to understand if you know your Greek alphabet. For example, 'alpha' means it is the brightest star in that constellation. The next brightest is designated 'beta' etc. This is known as the 'Bayer designation'. Some stars have proper names as well, for example, alpha Cancri is Acubens. Others are known by their catalogue number.

The brightness of stars sometimes fluctuates, or small errors were made at the time of measuring. so the scientific designations are a little off. In this case the brightest star of the constellation Cancer is the beta star, Altarf, followed by delta, iota, and then the alpha star! Cancer has only five main stars, one of which, delta Cancri, lies on the ecliptic.

The NGC was compiled by John Louis Emil Dreyer, director of the Armagh Observatory from 1882 - 1916. Cancer contains several NGC objects, including two open star clusters from the Messier catalogue: M67 and M44, known as the Beehive Cluster. At a distance of only 577 light years to Earth, is one of the closest open star clusters to us.

In some cultures the Beehive Cluster is known as Praesepe 'the Manger', honouring the place where the Christ child lay. M44 is flanked by gamma and delta, which represent the two donkeys of the Biblical story. M44 was the only cluster to be recognised by ancient astronomers as a nebula and described as a mist or small cloud. Galileo Galilei was the first to recognise and describe it as a cluster of stars when he turned the first telescope on it.

Cancer boasts a planetary nebula, Abell 31, which does not have a designated NGC number. It has a misshapen inner disk with very irregular brightness distribution, and no known outer shell. The magnitude varies between minimum 18 and maximum 12.2, which makes it very difficult to view without a powerful optical aid.

The space debris which creates a meteor shower comes from the tail of a comet as the Earth crosses where the comet passed previously on its own orbit. Imagine a trail of breadcrumbs, or sawdust like that used in hashing.

The resulting 'shower' is generally named after the star it appears to originate from (known as the radiant). There is an annual meteor shower related to Cancer, called the Delta Cancrids. It occurs every year between 14 December and 14 February, with the peak around mid-January.

The Tropic of Cancer is the most northern latitude on Earth where the Sun appears overhead at midday on 21 June. This is known as the summer solstice and gives the longest hours of sunlight for the Earth's northern hemisphere.

This line of latitude was named after the constellation of Cancer, where the Sun appeared to reside at the time of the solstice. Precession (the wobble of the Earth on its axis) has since moved the summer solstice further along the ecliptic, through its neighbouring sign of Gemini, and currently to where it now occurs in Taurus.

One extrasolar planetary system had been found in the constellation Cancer up to 2007; a whole solar system belonging to the star 55 Cancri A. The 55 Cancri system is the first known quintuple-planet system to be found. It features in the list of top 100 target stars for the NASA Terrestrial Planet Finder mission.

The nomenclature that has been decided on for planets is to use a lower-case letter after the parent star catalogue number (or name), eg '55 Cancri Ab'. This stays with the planet regardless of whether more discoveries are subsequently made within the same solar system, and despite the position of the new planet relative to the star. Therefore, the first-discovered planet of 55 Cancri A is 55 Cancri Ab, even though 55 Cancri Ae has a closer orbit to the shared sun 55 Cancri A. The planet 55 Cancri Af is in the system's 'Goldilocks zone', but as a gas giant is not a candidate for the search for extra-terrestrial life. However, should the planet have a rocky moon with enough gravity to retain an atmosphere this would make it a distinct possibility.

The figures given in the table below are the length of the planets' orbital periods around the parent star, which we know of as a year, in order of their distance from the star. The mass of the extrasolar planet is compared with that of Jupiter, our solar system's largest planet, known to astronomers as the 'Jovian scale'.

Cancer is a Western astrological sign covering the dates 22 June - 23 July. But this isn't the time when the Sun dwells there3 - it is about 2,000 years out of date. Astrology is quite a popular pastime, though, and a lot of people exchange star signs as chat-up lines on the pretext of finding out if they are romantically compatible. Famous Cancerians include: Tenzin Gyatso (His Holiness the 14th Dalai Lama of Tibet), Nelson Mandela, John Glenn, Prince William of Wales, George W Bush, Harrison Ford, Ringo Starr, King Tupou IV of Tonga, Jon Pertwee, Camilla, Duchess of Cornwall, Diana, Princess of Wales and Julius Caesar.

The crushed crab of the Hercules myth has parallels with the beautiful jewel-backed scuttling crabs featured in another starry epic, The Hitchhiker's Guide to the Galaxy. The book reveals that Vogons will spend a happy drunken night smashing the crabs to bits with iron mallets, before cooking the crab meat. In addition, the 2005 movie version featured a running visual joke involving crushed crabs.

1Current IAU guidelines use a plus sign (+) for northern constellations and a minus sign (−) for southern ones.2A light year is the distance light travels in one year, roughly 5.88 trillion miles or 9.46 trillion km.3Currently it is between 21 July and 9 August.