Constellations: Cassiopeia 'the Boastful Queen' Content from the guide to life, the universe and everything 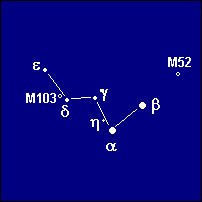 Shine forth a constellation, full and bright,
Bless the poor heavens with more majestic light,
Who in recital shall present you there:
Ariadne's crown and Cassiopeia's chair.
- The Lucasta Poems (1640) by Richard Lovelace (1618 - 57)

Cassiopeia features in the 48 constellations originally listed by the Greek astronomer Ptolemy (c90 - 168AD), and is one of the 88 modern constellations - although in Lapp (Sámi) mythology2, Cassiopeia isn't a separate constellation but a part of a larger one. Their 'Sarva the Moose' also encompasses Perseus and Auriga.

Cassiopeia is a northern hemisphere constellation. Situated between Perseus and Cepheus, it is easy to find and point out to casual observers: when the main stars are joined up they are shaped like a letter 'W'. Locate Ursa Major (the Great Bear AKA the Plough); the 'pointers' of the Plough point to the North Star, and Cassiopeia is on the other side of it. Our galaxy the Milky Way goes through Cassiopeia.

Objects of interest include:

When viewed from the nearest star system, Alpha Centauri, our Sun would be part of the constellation of Cassiopeia, extending the W into a zig-zag.

The Legend of Cassiopeia

In Greek mythology Cassiopeia was a queen of Æthiopia, the wife of King Cepheus. She boasted that their daughter, Andromeda, was more beautiful than the Nereids (sea-nymphs), which angered the sea god Poseidon. His punishment was to bombard the kingdom with storms and forbid the Nereids from rescuing sailors in the Red Sea. According to an Oracle, the only way to appease Poseidon was to sacrifice their daughter to Cetus, a sea monster. The naked Andromeda was duly chained to a rock at low tide3 to await her fate. Perseus, who was riding Pegasus, rescued the fair maiden, slew the monster and married Andromeda. Their descendants founded the Persian race, and they were the ancestors of Hercules.

When they died, all of the players were placed in the heavens as constellations, but the vain Queen Cassiopeia, whose bragging brought such misery to her people, had not been forgiven. Still seated upon her throne, she was positioned so near the pole star that for half the year she hangs upside down in order to learn humility.

The scientific star names are simple to understand (if you know your Greek alphabet). 'Alpha Cas' means that it is the brightest star in the constellation Cassiopeia. The next brightest is 'beta Cas', etc. This is known as the 'Bayer designation'. Some are named stars, like alpha Cas is Shedar; others are known by their catalogue number.

Rho Cassiopeiae, one of the brightest yellow hypergiants, is the best candidate to undergo a supernova explosion in the near future, according to astronomers using the Utrecht Echelle Spectrograph on the William Herschel Telescope. This star is 550,000 times brighter than our Sun, and although it is over 8,000 light-years distant, it can be seen without optical aids.

Pulsar J0002 is moving at over 1,100 km/s, fast enough to leave our galaxy. It left the supernova remnant CTB 1, which was created by an exploding star some 10,000 years ago. The pulsar was discovered in 2017 through Citizen Science, using a programme called [email protected]

The constellation Cassiopeia has some interesting deep-sky objects, two of which feature in the famous Messier catalogue.

NGC 7635 is known as the Bubble Nebula, for a rather obvious reason, it looks just like a bubble! A rapidly-expanding cosmic bubble of ionized gas, created by the stellar wind of the O 6.5 III giant BD+602522, fuels this nebula.

There is a Wolf-Rayet star in this area of the sky called WR 157, and it has created a large ring nebula, Sh 2-157. Wolf-Rayet (WR) stars are rare blue giants named after their discoverers Charles Wolf and Georges Rayet. The stars are massive, over 20 times the size of our Sun. The stellar wind they produce has been measured at speeds of several million kilometres per hour. They have a high rate of mass loss, equivalent to an Earth mass per year. This shortens the star's life and will eventually cause them to go supernova.

A supernova is the death of a massive star, which collapses under the weight of its own gravity after it has used up all its fuel. The star blows its outer layers into space in an explosion that can be seen over thousands of light-years, outshining everything surrounding it. One that was recorded meticulously in 1054 by Chinese astronomers happened in the constellation Taurus the Bull and eventually created the beautiful Crab Nebula that we see today.

There have been two supernovae in Cassiopeia in recent history, the first was in 1572, and it lasted for between six months to around a year. The astronomer Tycho Brahe recorded scientific observations and published them in De Stella Nova. At that time in history, the celestial sphere was believed to have been created all at once (well, within six days) by God as divinely perfect and unchanging, so to exploit a notion that it was any other than Ptolemaic6 where the Sun, (our) Moon, other planets (in our solar system) and stars (no new ones, please) orbit a fixed Earth (geocentric), was tantamount to sacrilege and blasphemy. That was not a period in time when it was wise to point out gaping holes in the fabric of peoples' belief-systems, especially one as strong as religion, and if one were brave enough, refusal to recant meant enduring a fate worse than death. In the same year that Fr Giordano Bruno was burned at the stake for such a crime, 1600, William Shakespeare mentioned the supernova when he wrote about a 'bright star' - and its position in the sky - in the opening scene of Hamlet7.

Cassiopeia A exploded as a supernova around 340 years ago, one of the youngest remnants that we know of. Around 1665 AD from our vantage point that is, because the light took about 10,000 years to reach us. Cassiopeia A was the first object that the Chandra X-ray observatory ever located and studied. This star in Cassiopeia that blew itself apart shone down in its old age upon people such as William Shakespeare, who, if he'd known it was in its death-throes, would no doubt have written a sonnet about it. As it is, no-one recorded the supernova, not even Sir Isaac Newton (1643 - 1727) who was a young adult around the time it appeared. Around that time in the mid-1600s there was a lot of nasty stuff going on, particularly in London. The old mnemonic:

In 1665 hardly any of London was left alive;
In 1666 London burned like a bundle of sticks.

gives some idea. Certainly in medieval times and the middle ages comets were thought to be 'harbingers of momentous events', how much worse would a supernova have seemed? It's just possible that if any astrologers or soothsayers noticed the exploding star they could have made some dire predictions and been spot-on!

Extrasolar planets orbit other stars outside our own Solar System. Over four hundred have been discovered up to 2009. Cassiopeia is home to the following:

A family of upside-down  jellyfish has been given the scientific name Cassiopeidae. They are a favourite meal of the red-listed leatherback and green sea turtles, but aren't themselves listed as endangered. Most creatures that aren't interested in eating the jellyfish avoid them because getting too close can result in a nasty sting. However, an ingenious hermit crab, Dorippe frascone, has developed a habit of kidnapping Cassiopeia jellyfish and carrying them upon their backs. The effect upon the crab's predators is the same - they give the crab-jellyfish tandem a wide berth.

1Current IAU guidelines use a plus sign (+) for northern constellations and a minus sign (−) for southern ones.2Poor Sarva the moose spends his nights being hunted down not only by Orion, but also Gemini (the twins) and Ursa Major the Great Bear!3This scene inspired artists such as Vasari, Paul Gustav Doré and Théodore Chassériau.4A light year is the distance light travels in one year, roughly 5.88 trillion miles or 9.46 trillion km.5Dark, opaque knots of gas and dust (possible pre-star formation) named after Dutch astronomer Bart Jan Bok (1906 - 83), who first observed them in the 1940s.6After Ptolemy, the Greek mathematician and astrologer.7Proving the old adage that you can get away with anything so long as it is disguised as art.