Constellations: Leo Minor 'the Lesser Lion' Content from the guide to life, the universe and everything 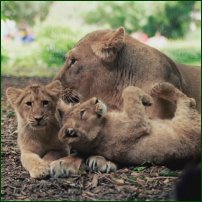 Where now is the lions' den,
the place where they fed their young,
where the lion and lioness went,
and the cubs, with nothing to fear?
– Nahum 2:11

This spring constellation was created by Johannes Hevelius (1611 - 1687). It is one of seven star formations he created which are included in the internationally recognised list of modern constellations. These were published in his 1690 atlas Firmamentum Sobiescianum. He is said to also have named 46 Leonis Minoris 'Praecipua' because it was the principal star in his new constellation. Leo Minor is located between the constellation Leo and the back paw of Ursa Major 'the Great Bear'. You will need dark skies to see this constellation as all the stars are less than +3.8 in magnitude.

There is no Greek mythology connected with this constellation; however, the Arabs said that Leo had scared a group of gazelles with his roar and these stars were their tracks as they raced to safety.

The brightest star in Leo Minor has a number given by John Flamsteed (1646 - 1719). There is no alpha Leo Minoris as the creator of this constellation was borrowing stars from other patterns in the sky. The table below contains Flamsteed numbers.

The New General Catalogue, by J Dreyer, was published by the Royal Astronomical Society in the late 19th Century. It was expanded to include two Index Catalogues (IC). This list of star clusters, nebulae and galaxies was revised again in 1973, and is continually updated by the NGC/IC Project.

Extrasolar planets are worlds which orbit stars outside our own Solar System. HD 87883 b is a superjovian world orbiting an orange dwarf star at over 3AU distance. HD 82886 b is another superjovian planet, it completes an orbit of its star in 705 days.

Hanny's Voorwerp was discovered in Leo Minor in 2007. This strange object was named after its discoverer, Dutch schoolteacher Hanny van Arkel. It is thought to be a 'cosmic ghost', a brand new celestial object never witnessed before.

Unlike Simba in Disney's Lion King this small lion will not grow up to replace Leo. He is forever consigned to second place. In the wild lions often live in groups called prides, and according to National Geographic are an endangered species. Some people have likened their pets to a small lion.

1Current guidelines by the International Astronomical Union (IAU) use a plus sign (+) for northern constellations and a minus sign (−) for southern ones.2A light year is the distance light travels in one year, roughly 5.88 trillion (short scale, 5.879×1012) miles or 9.46 trillion (short scale, 9.461×1012) kilometres.3One megalight-year is equal to one million light years.