Constellations: Lacerta 'the Lizard' Content from the guide to life, the universe and everything 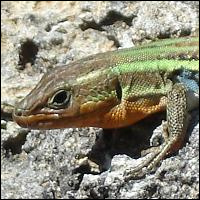 Precisely the least, the softest, lightest, a lizard's rustling, a breath, a flash, a moment - a little makes the way of the best happiness.
– Friedrich Nietzsche

Lacerta is a small northern constellation, invented by Hevelius in the 17th Century. The constellation is rather faint, with no stars brighter than 4th magnitude. The Milky Way 'flows' through part of the constellation, and there is one interesting object, BL Lacertae, although it is only visible in very large telescopes.

Lacerta is tucked in between Cygnus to the west and Andromeda to the east, and borders with Cassiopeia and Cepheus to the north and with Pegasus to the south. The constellation's most distinctive feature is a small 'W' of five stars, made from the stars beta, alpha, 4, 5 and 2 Lacertae.

The NGC catalogue is a list of interesting deep-space objects (that is, objects outside our solar system). It was compiled by Dreyer at Armagh Observatory based on the observations of Sir William Herschel. Lacerta has only three objects in the catalogue.

The object known as BL Lacertae was discovered in 1929 by Cuno Hoffmeister (1892 - 1968). It was thought to be a variable star, so it was given a standard variable star designation, with two letters followed by the constellation name. Later it was found to be a rather unusual object which is not yet fully understood. It has given its name to a whole class of similar objects throughout the cosmos, which are called BL Lacertae objects, BL Lacs, or just Lacertids.

In 1968, John Schmitt was looking at the region using a radio telescope and discovered that BL Lacertae is a strong source of radio waves. Detailed examination later showed that it is not a star at all, but something much odder. There are four main findings:

So what could be producing that sort of energy? The only known source of that sort of power is the destruction of matter as it falls into a black hole, so this is the current explanation offered by astrophysicists for all BL Lacertae objects. They imagine a giant spinning black hole, with a mass the equivalent of 100 million suns. Orbiting around it is a disc of dust and gas known as an accretion disc. Due to random collisions in the disc, there is a continuous stream of matter falling into the black hole.

For reasons not fully understood, there are two 'jets' shooting away from the black hole along the axis of rotation, carrying matter and high energy particles at speeds close to the speed of light. Such jets have been seen coming out of the axis of some distant galaxies. If a jet of a distant black hole were lined up in such a way that we were looking straight into the jet, then the energy would match that of a BL Lacertae object. Since this is the only known cause of something that bright, this is the preferred explanation. But it is not entirely satisfactory since the cause of the jets is not understood. There is currently much research being done on this topic by astronomers and astrophysicists.

Extrasolar planets are ones outside our solar system, orbiting other stars. They are a hot topic for astronomers, with new ones being discovered all the time. Because the distances involved are so huge, the planets have to be detected by indirect means, such as by analysing the effect their gravity has on their parent star.

One planet had been discovered up to the time of writing within the Lacerta constellation. This star was discovered by the Hungarian Automated Telescope Project (HAT-P), so it has been given the name HAT-P-1 b (the letter b is standard for the first planet discovered in a star system). The project looks for stars which dim regularly as a planet goes in front of them. The information gathered gives the diameter of the planet as well as its orbital period. Doppler shift in the star's spectrum can be used to estimate the mass of the planet. This yields an interesting result: the planet is one of the least dense ever discovered, with a density less than half that of water. Because this planet orbits around its parent star in only four days, it must be very close to the star, so the surface temperature is likely to be far too hot for life as we know it.

The space debris which creates a meteor shower usually comes from the tail of a comet, as the Earth crosses the point where the comet has passed previously on its own orbit. Imagine a trail of breadcrumbs; now imagine breadcrumbs travelling at kilometre per second speeds and burning up in the Earth's atmosphere.

The meteor shower connected with this constellation is called the Alpha Lacertids, because they appear to radiate from a point in the sky close to the star alpha Lacertae. The meteor shower is visible in the period 3 - 12 July, but does not have an observed maximum. Hourly rates of meteors are typically less than eight.

1A light year is the distance light travels in one year, about 10 trillion kilometres.