Constellations: Sculptor 'the Sculptor' Content from the guide to life, the universe and everything 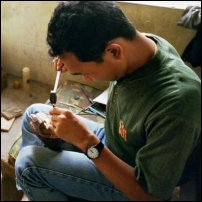 For Michelangelo, the job of the sculptor is to free the forms that, he believed, were already inside the stone.
– Ascanio Condivi: The Life of Michelangelo Buonarroti

Sculptor is a small southern constellation bordered by Cetus, Aquarius, Piscis Austrinus, Grus, Phoenix and Fornax. It was originally named l'Atelier du Sculpteur (the sculptor's studio) by the man who created it, French astronomer Nicolas Louis de Lacaille (1713 - 62), making it up using stars 'borrowed' from Cetus and Phoenix before the boundaries were set.

Johann Elert Bode presented it as Apparatus Sculptoris in his 1801 star atlas Uranographia, and it was shortened to the name which survives today when the IAU (International Astronomical Union) eliminated all but the now officially recognised 88. Sculptor is an indistinct constellation with no bright stars, but it is noteworthy because it contains a prototype variable star and the South Galactic Pole.

The scientific star names are lower case Greek letters combined with the genitive name of the constellation, known as the 'Bayer designation' after the man who devised the system. Some stars have common names as well, for example, alpha Tauri is Aldebaran, but none of the stars of Sculptor are named. Other stars, like HD 4208, are known by their catalogue numbers. Newly-discovered variable stars, like VY Sculptoris, are given upper case English letters.

The New General Catalogue was compiled by John Louis Emil Dreyer (the director of the Armagh Observatory from 1882 to 1916). This was later expanded to include newer discoveries, and is being continually updated as the NGC/IC Project.

NGC 253 is also known as The Sculptor Galaxy. This starburst spiral, almost edge-on from our vantage point, was discovered by Caroline Herschel in 1783. The Sculptor Galaxy is one of the closest beyond our 'local' group of galaxies, lying at a distance of 11 million light years2. There was a supernova registered in this galaxy in 1940, thus it was catalogued SN 1940E.

NGC 288 is an unnamed globular star cluster, but it's far from unknown. It has been listed 'Hidden Treasure 4' in the Cambridge University Catalogue, and Herefordshire clergyman the Rev Thomas William Webb included it in his 1859 book Celestial Objects for Common Telescopes.

NGC 613 is a barred spiral galaxy which has undergone extensive study due to its highly active nucleus. The gas being expelled is indicative of a supermassive black hole. Unusually for a barred spiral, this galaxy has many arms, giving it a more distinctive appearance.

The Cartwheel Galaxy is a lenticular galaxy with starburst formation which was imaged by the Hubble Space Telescope and the Chandra X-ray observatory. Its unusual shape reveals that at some time in its history, possibly a billion years ago, it underwent a collision with a neighbouring galaxy. Certainly it's remarkable to see a galaxy with a brighter outside rim than the central core, which is probably why this fabulous diva of a galaxy was so named. The Hubble image of the Cartwheel Galaxy was one of the early choices of the editors of Astronomy Picture of the Day.

NGC 7793 is a star-forming spiral galaxy ten million light years distant which has been imaged with the infrared array camera (IRAC) for the Spitzer Infrared Nearby Galaxy Survey (SINGS) Legacy Project.

IC 5332 is a face-on spiral galaxy with widely-spaced arms which are completely symmetrical. This is a stand-alone galaxy, it is not part of the Sculptor Group.

Some extrasolar planetary systems have been found in the constellation Sculptor. Figures given in the table below are the length of the planet's orbital period around its parent star, which is its 'year', and the mass of the extrasolar planet compared to that of Jupiter, our Solar System's largest planet, known by astronomers as the 'Jovian scale'.

Sculptor Down to Earth

Sculpting is an artform which has been created and appreciated since antiquity. Sculptures like Rodin's 'The Thinker' and the great beauty 'Venus de Milo' are priceless treasures. One of the earliest-known sculptors was Thutmose (aka Djutmose) who created the fabulously iconic bust of Queen Nefertiti around 1340 BC.

Sculptures can be formed from almost any solid material, including ice. The famous Icehotel in Jukkasjärvi, Sweden, melts every spring, so a new hotel has to be built in its place, and specially-selected sculptors are engaged to create new artwork for the rooms. Ice sculptures, possibly carved with a chain-saw, are popular centrepieces at weddings and other big celebrations.

Sculptures in the Edited Guide

1Current IAU guidelines use a plus sign (+) for northern constellations and a minus sign (−) for southern ones.2A light year is the distance light travels in one year, roughly 5.88 trillion miles or 9.46 trillion km.3We nicknamed it Pandora's Cluster because so many different and strange phenomena were unleashed by the collision. Some of these phenomena had never been seen before. – Astronomer Renato Dupke.