Queen Nefertiti's Bust Content from the guide to life, the universe and everything 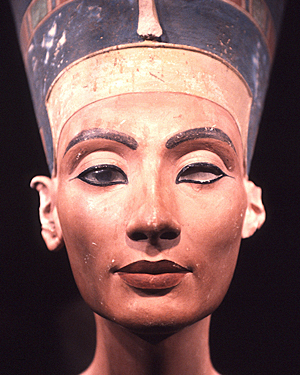 And the heiress, great in the palace, fair of face, adorned with the double plumes, mistress of happiness, endowed with favours, at hearing whose voice the king rejoices, the chief wife of the king, his beloved, the lady of the two lands, Nefertiti, may she live for ever and always.
- Pharaoh Akhenaten

A 3,300-year-old unfinished likeness of Queen Nefertiti's head, head-dress and long slender neck was discovered1 at Al-Amarna by a team of German archaeologists, led by Ludwig Borchardt, in Egypt in 1912. The serenely beautiful limestone bust of Nefertiti (whose name literally means 'a beautiful woman has arrived') was originally crafted by Thutmose2 circa 1350 - 1340BC. It was donated to the Egyptian Museum in Berlin by Dr James Simon (1851 - 1932), the original excavation's financial sponsor, in 1920.

Nefertiti's bust became world famous due to the advent of photography making its likeness available to people who could not personally see it. Nefertiti's image attained worldwide iconic status, sparking many an interest in Egyptology. The bust became the most copied work of ancient Egyptian sculpture until Pharaoh Tutankhamun's undisturbed tomb was discovered by Howard Carter a decade later.

Nefertiti wasn't just a pretty face, hanging adoringly on the arm of her husband Pharaoh Akhenaten and producing heirs and spares. She was actively involved in her husband's attempts to change the religious order of things in ancient Egypt. In tomb decorations Nefertiti is depicted wearing the regalia of a pharaoh, and sitting on a similar-sized throne to that of Akhenaten. Some Egyptologists believe she co-ruled with Akhenaten and then ruled independently as pharaoh following the death of her husband circa 1336BC.

Akhetaten (now called Al-Amarna) was the city Pharaoh Akhenaten decreed to be built on virgin land, for his new monotheistic religion. It lies 400km (250 miles) north of Luxor on the banks of the River Nile, and took two years to complete. Nefertiti is believed to have ordered the construction of a huge bakery-brewery production facility there. So it is possible the bust of Nefertiti was originally intended to be a figurehead for the local pub.

Egypt's Requests for the Return of the Nefertiti Bust

The Egyptian government requested the return of the priceless work of art in 1933 but Chancellor Adolf Hitler, who had fallen in love with the Aryan look of the sculpted siren, refused to part with her.

The keepers of the remarkably enigmatic exemplar of Egyptian royal history still ignore requests to return the bust of Nefertiti to Egypt, where some people think she belongs.

Egypt has been deprived of five artefacts that are regarded as key items of the Egyptian cultural heritage and which should be handed over to us. We are the best keeper of these objects because they are part of our cultural heritage3.
- Dr Zahi Hawass, Secretary-general of the Supreme Council of Antiquities

The five artefacts which Dr Hawass is requesting the return of are:

I have not received any such request [for the return of the bust of Queen Nefertiti]. This is not a matter to be discussed on a museum level. It is something that needs an intergovernmental dialogue and discussions.
- Dietrich Wildung, Director of the Berlin Egyptian Museum

The Hungarian4 contribution to the 2003 Biennale5 in Venice, Italy, was the head of Nefertiti atop a bronze female torso, whose apparel was opaque and very snug. This caused an apoplectic reaction from the Egyptians, who considered it an insult to their Islamic morals. In Egypt they revere Nefertiti and consider the bust part of their heritage and a national treasure. In Berlin, Nefertiti is nicknamed 'Nofi'6 and her image adorns postcards. The Egyptian museum's director, Dietrich Wildung, said the controversial piece was 'a homage to Nefertiti by means of contemporary art'.

We don't agree with this, that the head of Queen Nefertiti should be subjected to an experiment by unknown artists, and could possibly be put in danger.
- Mohamed Al-Orabi, the Egyptian Ambassador to Berlin

Pharaoh Akhenaten's wish was granted, for to speak the name of the dead7 is to guarantee immortality. His beautiful Egyptian Queen has her own spotlighted viewing room, and the regal, timeless work of art is a popular exhibit for the Berlin Egyptian Museum, attracting thousands of visitors per year. Nefertiti's name will live forever.

1A companion piece, a likeness of Pharaoh Akhenaten, had been broken.2Sometimes spelled 'Djutmose'.3Akhenaten's gold sarcophagus has been recovered and restored and is now on display in the Cairo Museum.4The creators were a Hungarian duo called Little Warsaw.5Art show.6From Nefertiti's German name 'Nofretete'.7The walls of Royal tombs were decorated with cartouches naming the deceased.