Pharaoh Akhenaten 'the Heretic' Content from the guide to life, the universe and everything 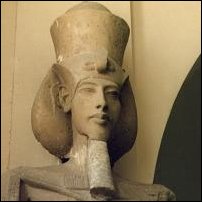 Pharaoh Akhenaten, ruler of Egypt from 1352 to 1336 BC, was known as 'the Heretic' because he changed the religion of the Egyptian people while he ruled.

Akhenaten, originally known as Amenhotep IV, was the second son of Amenhotep III; he was not destined to rule Egypt, but his older brother Tuthmosis died at a young age. Before he became pharaoh, Akhenaten was barely mentioned at all in historical writings. It is known that he was already married to Nefertiti, and that they had already started their family but were not successful in producing a male heir together. The royal couple had six daughters:

Another wife, Kiya, did however produce a son, and this boy, Tutankhamun was married to the Princess Ankhesenpa'aten (who later became Ankhesenamun).

Amenhotep IV had this roofless temple built in honour of the sun god. The temple's many offering tables were exposed to direct sunlight; in Egypt's climate, this was very dangerous for the occupants.

Never before had such a temple been built, which is evidence of Amenhotep's state of mind. He told his courtiers that he had communed with his god Aten, and that henceforth he would be known as Akhenaten ('Servant of the Aten'). The newly-renamed Pharaoh Akhenaten commanded that a new city be built on virgin land, in honour of the sun god, which was to be named Akhetaten ('Horizon of the Aten').

The beautiful city of Akhetaten was built within a few years, and Akhenaten moved his entire court and family there. The city was bisected by an avenue called the Royal Road. The great Temple of the Aten was built on the western side, directly opposite the Royal Palace on the eastern side. These two buildings were connected by a bridge, which spanned the Royal Road.

Akhenaten decreed that the Egyptians should worship the god Aten and only this god. This is the first time in history that the concept of one universal god was ever recorded. The spiritual name for this entity was Re-Herakhte; and the physical body was known as Aten, the Sun Disc. According to Akhenaten, this god was not only the Egyptian god, but also the god of all mankind, but he permitted no communication with Aten, other than by himself or Queen Nefertiti.

The royal princesses were allowed to help with the rituals, but this was to the exclusion of everyone else. All offerings to this god had to go to the royal couple, who in turn transmitted them to Aten. Likewise, any blessings or 'instructions' from Aten went only to them. Denied personal access to the single god from the outset, this attempt at monotheism was doomed. Akhenaten had banned the worship of the other Egyptian gods, but outside of Akhetaten's walls, this pantheism was still practised.

Early Amarna art is the strangest of all the Egyptian styles. The figures (especially that of Akhenaten) were elongated and out of proportion. Limbs were portrayed with seemingly no flesh, yet there was excess flesh on the stomach, thighs and buttocks. With elongated skulls, slanted eyes, fleshed-out lips and angular faces, they were almost caricatures rather than representations of human beings.

In the tomb of Bek, Akhenaten's sculptor, it states that Bek considered himself the apprentice and that the Pharaoh had been the master sculptor. Early statues of Akhenaten were mistakenly thought to be of Nefertiti, due to the curvature of the hips and the swell of the belly. If the representations of Akhenaten are correct, he probably suffered from an affliction known as Marfan's Syndrome. By the end of Akhenaten's reign, the elongated style had evolved to a rounder, more recognisable human style.

It is widely suspected that Akhenaten went blind before he died (most probably from staring at the sun). Nefertiti was co-ruler and the softening influence was undoubtedly hers. The most famous example of this period is the magnificent bust of Nefertiti by Thutmose2.

1Literal translation: 'The Sun Disc is found in the estate of the god Aten.'2Sometimes spelled 'Djutmose'.