Egyptian Gods Content from the guide to life, the universe and everything

An Introduction to Pharaonic Egypt | The Rise of Egypt | Rebuilding | From the Depths to the Heights
The Amarna Period | The Long, Slow Decline | Egyptian Mummies | Egyptian Pyramids
Egyptian Legends and Theology | Egyptian Gods 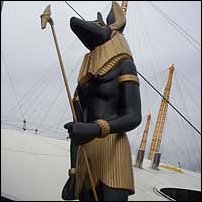 One of the best-known aspects of ancient Egyptian culture is the plethora of animal-headed gods.

It should be noted that over the thousands of years that these gods were worshipped, their responsibilities and relationships changed many times. Two gods might become combined into one, or a god might displace another in the popular affection, leading to the displaced god being regarded as the son of the pretender.

To add to this complexity, there were originally several different religious traditions in separate parts of Egypt, and these slowly became integrated over time. This Entry will cover only the principal gods.

The residents of Hermopolis had a relatively simple and symmetrical cosmology that slowly became more complex over time, as further deities from other traditions were added.

They believed that the universe began in chaos. This chaos had four characteristics, each represented by a god and a goddess: water (Nun and Nanuet), infinite space (Heh and Hehet), darkness (Kek and Keket) and invisibility (Amun and Amunet). Aside from their responsibilities as representatives of one of these aspects, these deities do not appear to have had any particular personality.

In later versions, there was a primeval mound, on which was laid a cosmic egg, from which the sun-god hatched. It should be noted that Amun went on to greater things, becoming regarded as a member of the Triad of Thebes.

The Ennead were the major deities of the Egyptian pantheon from the Middle Kingdom onwards. This was a distinction observed mainly by the residents of Heliopolis.

The Heliopolitans had a more complex cosmogeny than the Hermopolitans. Out of watery chaos (Nun) came the primeval mound. The sun-god Atum spat out Shu (the air) and Tefnut (moisture). Shu and Tefnut mated to produce Geb (the earth) and Nut (the sky). Geb and Nut in turn mated to produce Isis, Osiris, Seth and Nepthys.

Shu, Nut and Geb together make the universe; Shu, representing the air, stands to support Nut, who is kneeling and covered in stars. The earth-god, Geb, reclines underneath the other two.

In later texts, the Ennead became regarded as a single entity. Atum became part of Re (or Ra).

The Ennead consisted of:

The original creator, shown as a human or a serpent. He was ruler of the other gods, and represented the Sun. He created himself from nothing, and created Shu and Tefnut from his semen.

God of the sky and winds, he held the firmament separate from the land. He was created by Atum, and with his sister Tefnut fathered Geb, Nut and Osiris.

Tefnut was goddess of air and moisture. Along with her brother Shu, she created Nut, Osiris, Isis and Seth.

Geb was the father of Osiris, Isis, Seth and Nepthys.

She was the mother of the sun, moon and heavenly bodies. She is often shown arching over, to represent the starry sky.

Osiris was famous as the symbol of eternal life. He came from humbler origins, however, and was originally the corn-god of Busiris. He was god of life, death and fertility, so he was a busy chap. He later became responsible for the flooding of the Nile and the judging of souls in the afterlife. He was married to his sister, Isis, and was the father of Horus and, in later myths, Anubis.

The most famous of the Egyptian myths says that the world was divided between Osiris and Seth, the god of deserts. Seth was jealous of Osiris, and so murdered and dismembered him. Isis collected the pieces of her husband's body and temporarily resurrected him for long enough to get pregnant by him. The offspring of this union, Horus, cast his father's murderer into the wilderness3.

The Osiris cult was centred at Abydos, the site where Osiris's head (or torso) was supposed to have been buried.

Isis was the consort of Osiris and mother of Horus. She represented marriage and the 'domestic arts'4, and was renowned as an enchantress. Since the pharaohs identified themselves with Horus, Isis was regarded as their divine mother. She would later become conflated with Hathor.

Long after the fall of Egypt from greatness, worship of Isis continued. Her cult was long a rival to early Christianity between the third and fifth centuries AD. In Coptic art, she was identified with Mary, mother of Jesus, and her son Horus was regarded as an aspect of Jesus. It is possible that this identification helped Christianity to gain credence in Egypt.

A bizarre creature with large ears and a distinctive snout, Seth was god of the desert and foreign lands. He killed Osiris, but was thrown out into the wilderness by Horus. He was regarded as evil by the Egyptians.

Nepthys disguised herself as Isis and tricked Osiris into impregnating her (in some versions she simply got Osiris drunk). The offspring of this union was Anubis. Although Nepthys was the consort of Seth, she aided Isis in her search for the parts of Osiris's body.

Amun was a member of the Ogdoad, and later of the Triad of Thebes during the Middle Kingdom. His cult centre was Karnak. He was known as the 'Unseen One', and thus had a blank cartouche. He had many sub-identities, known as 'aspects', such as Amun-Re (the creator), Amun-Min (the male fertility principle, always shown very priapic) and Auf-Re, the ram-headed god who revitalises the dead and emerges from the underworld as Khepri.

Amun was usually shown as a man with ram's horns and the twin crown of the Upper and Lower Kingdoms. He was the consort of Mut.

The consort of Amun. She was the mistress of heaven, and wore a vulture head-dress.

The son of Amun and Mut, Khonsu was the traveller, the moon-god and the prophet. He was represented as a man with a hawk's head or as a young boy.

There were literally dozens of Egyptian gods, and as noted above their names and responsibilities changed through history. Some of the more prominent were:

Bastet was the cat goddess and daughter of Re. She later became assimilated into Sekhmet, the daughter of Atum, and later still identified with the Greek goddess Artemis, who also had a feline aspect.

Hathor was the goddess of love and the dead. She took the form of a cow, or later a human with the head and horns of a cow. Hathor represented the body of the sky, the souls of trees, gold, turquoise, music and dance. She was wet-nurse to Horus, and in later myths became regarded as his consort.

Hathor's cult centre was at Edfu, and there was an annual festival where images of Horus would be sent down-river from Thebes to Edfu so that the two deities could celebrate their conjugal union.

During the Ptolemaic period, Hathor became identified with Aphrodite, the Greek goddess of love.

Hapy was god of the Nile in flood. He was represented as a blue-green man with a female breast. There is no sign that the Egyptian priests took this less than totally seriously.

The earliest royal god was given the shape of a falcon, with the sun and moon as his eyes. He was the sky-god and the ruler of the daytime. The pharaohs believed they were reincarnations of Horus. As part of the myths associated with the Ennead, he became known as Horus the Elder. He was said to have built the first house, or to have laid the cosmic egg from which everything else hatched.

Horus was strongly associated with the myth of Osiris and Seth - see the Osiris section above.

The ram-headed potter-god of the Nile who was believed to have made the first man on his wheel.

Ptah was the 'Great Craftsman' or 'Divine Artificer'. He was god of metallurgy and engineering, which he was said to have invented. In Memphis, he was regarded as the great creator. He wore a shroud and had mastery over death. During the Ptolemaic period he was identified with the Greek god of the dead, Hephaestus.

Re had many aspects, representing the many phases and powers of the sun. As Re-Herakhte (Horus of the Horizon), he was shown as a man with a hawk's head. As Khepri (the Rising Sun), he was shown as a dung-beetle or scarab. As the Aten, he represented the disc of the midday sun. He was said to sail in a solar barque through Duat (the underworld) each night to reach the eastern horizon unseen.

His worship was exclusive to the pharaohs and priests, who were the only ones granted access to his inner sanctum.

Sekhmet was known as 'the Powerful', and was goddess of war, disease and medicine. She was the consort of Ptah, the Memphite creator-god, and later became assimilated into Bastet and Mut.

Sobek was a crocodile-god and was worshipped5 at the Faiyum and Ombos oases. His cult centre was at Arsinoe, later known as Crocodilopolis. During the Middle Kingdom he coalesced with Re and, as Sobek-Re, was worshipped as the creator. He was shown as a hawk-headed crocodile or a crocodile-headed human.

Sokar was the falcon-headed god of darkness, death and necropolises.

Thoth was another very important deity to the Egyptians. He was worshipped in Hermopolis in the form of a man with the head of an ibis, or a baboon with prominent genitals. He was the god of sacred writings and wisdom, the divine scribe and reckoner of time who was credited with inventing writing. He was associated with Khonsu.

Thoth was another candidate, along with Horus, for being the layer of the cosmic egg.

Anubis was the jackal-headed god of dying and the dead. He was responsible for judging the dead by weighing their hearts on a set of scales. He originated in the Ogdoad, where he was a minor deity married to Anput. His father was originally Ra, though later he was regarded as the son of Osiris and Nepthys. At the height of his fame, he was responsible for almost every aspect of death and embalming.

In later years, his importance waned as other deities such as Osiris also became associated with aspects of death. Job-sharing did not pay off for him, and he was left with only his judgemental roles.

The Aten Cult at Amarna

In one of the most interesting episodes in Egypt's long history, Pharaoh Akhenaten revolutionised both society and theology by outlawing the worship of all gods except the sun-disc, the Aten. This is often cited as the earliest known monotheistic religion, (although it is not clear whether the other gods were no longer believed in or merely not worshipped), and it has been suggested that it may have had an influence on (or have been influenced by) the early Hebrews.

A few years after Akhenaten's death, his faith was declared heresy and worship of the old gods was reinstated. His new capital at Amarna was abandoned, and so complete was the destruction of monuments associated with his reign that this whole episode was unknown to the modern world until the 19th Century.

1Ogdoad means 'eight'. 2Ennead means 'nine'. 3There is an intriguing possibility that this legend may have its basis in the struggles between Upper and Lower Egypt.4It appears that even in 2000 BC women believed that the way to a man's heart was through his stomach. 5Would this be termed crocodolatry?