Egyptian Mummies Content from the guide to life, the universe and everything

An Introduction to Pharaonic Egypt | The Rise of Egypt | Rebuilding | From the Depths to the Heights | The Amarna Period | The Long, Slow Decline | Egyptian Mummies | Egyptian Pyramids | Egyptian Legends and Theology | Egyptian Gods 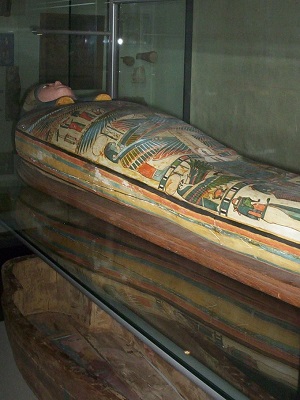 The ancient Egyptians did not believe in bodily reincarnation1, but they did believe that the spirits of the dead were tied to their Earthly bodies and could not exist without them. It was therefore of vital importance to preserve these bodies. While this was beyond the means of the peasant majority, the nobles and pharaohs spent vast sums ensuring their continued survival after death.

Egyptian theology called for the existence of at least three types of 'spirit' or 'soul': the Ka (which remained bound to the tomb), the Ba (which could roam beyond the tomb, but needed to return to it) and the Akh (which would be judged by the gods and might be admitted to paradise).

The desert conditions in Egypt have always led to a small number of bodies being naturally mummified by the arid sands and winds. Deliberate, ceremonial mummification appears to have begun around 2600 BC, during the 4th or 5th Dynasty.

The process was steadily refined and improved over Egypt's long history. The most elaborate and best preserved mummies were produced around 1270 - 1075 BC, during the 19th and 20th dynasties. Naturally, at any period lower-quality mummies were produced for those who could not afford the full process.

The first step was to wash the body with palm wine and water.

The liver, lungs, stomach and intestines were removed and packed in a salt called natron2. A long, hook-ended implement pierced the nasal membrane and mashed the brain, allowing its removal through the nose. The heart was left in place as it was at the centre of the body and believed to house the spirit.

The organs were kept in special urns called Canopic jars. There were four of these, each with a lid representing an Egyptian deity who would guard one set of organs. These were: Imsety (human-headed, tending the liver); Hapy (baboon-headed, looking after the lungs); Duamutef (jackal-headed, caring for the stomach); and Qebehsenuef (falcon-headed, with responsibility for the intestines). In early mummifications, the organs were buried with the body in their protective canopic jars. Later, the tradition became to re-insert the preserved organs into the body, although the appropriate canopic jars were still buried to provide protection for the organs in the afterlife.

The body cavity was then stuffed with leaves and sawdust to prevent sagging due to water loss. Next, it was covered with natron and left for up to 70 days to dehydrate, after which it was carefully washed clean of the natron, then oiled to keep it flexible. False eyes were sometimes inserted into the eye sockets.

Now the wrapping began, using cloth which was usually linen. Between layers, charms and amulets would be placed, as it was believed these would ward off evil spirits. In the more elaborate mummifications, each finger and toe might be wrapped separately. The legs and arms were then tied together, and a papyrus scroll of the Book of the Dead was placed on the chest. More layers of cloth were wrapped around the corpse, with layers of glue or resin to bind them.

A picture of Osiris might have been painted on the outer layer of wrappings, before the mummy was tied and placed in inner and outer boxes.

After the physical mummification was completed, a further series of rituals would be performed. The most important was the ceremony of the 'Opening of the Mouth', which was believed to allow the body to eat, drink, speak and use its former senses. 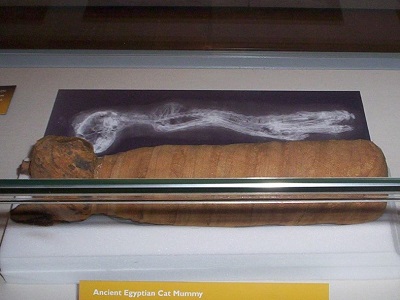 Many tombs have paintings of armies of servants and of crops. The pharaohs believed that by placing painted or carved images of these things in their tombs, they could take them into the afterlife with them. These scenes gave a precious insight into courtly life in ancient Egypt, as they may have included hunting and other pastimes.

1The idea that the dead would come back to life in their original bodies. 2Hydrated sodium carbonate.