Canopic Jars Content from the guide to life, the universe and everything 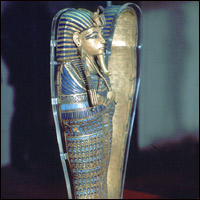 The earliest examples of Canopic jars [which have survived] come from the 4th dynasty tomb of Queen Meresankh III at Giza, from the reign of Menkaura.
- Canopic Chests and Jars, Taylor Ray Ellison

Ancient Egyptians believed in life after death and the possibility that the deceased might return to Earth and need the use of their body again. So those who could afford it, like members of the royal family and other important people, had their body mummified and some internal organs stored in sacred jars. These have become known as Canopic jars, possibly named after the Egyptian god Canopus.

There may be some connection with the burial place of a fabled Greek hero, Kanopus (or Kanobos), who was King Menelaus' helmsman when the Spartans were on their way to the Trojan War. According to legend, when the crew disembarked on the bank of the River Nile, Kanopus saved the king's life by pushing him out of the way of an approaching snake. Kanopus was bitten by the snake and subsequently died. To commemorate this heroic act, King Menelaus erected a monument to Kanopus on the spot where he was buried. The town of Canopus (known as Pikuat to the ancient Egyptians) was founded nearby.

From the 2nd Dynasty until the end of the 17th Dynasty, the lids of the Canopic jars were fashioned to create an image of the deceased. Subsequently, the tops began to reflect the personification of the four sons of Horus: Imsety, Hapy, Duamutef and Qebehsenuef. These deities were associated with the corresponding internal organs:

The jars were made from calcite (Egyptian alabaster), limestone, pottery or gilded wood. All had different heads, but displayed the same body - wrapped up like a mummified human corpse. These were then decorated, quite elaborately in some cases. There would also be inscriptions beseeching the gods and goddesses for protection. When the organs had been placed inside the jars, they were stored near the sarcophagus, one at each corner; or they could have been placed inside a special chest or casket which was then hidden behind a false wall in the base of the sarcophagus.

The funerary arrangements of 18th Dynasty Pharaoh Akhenaten, 'the heretic king', were a little different, as you might expect. His Canopic equipment glorified only one god, the Aten (the sun disc). At each corner of the chest was a representation of a hawk with spread wings, another embodiment of the sun god. A Canopic jar from the same time period shows the head of a beautiful woman, possibly Queen Kiya, Tutankhamun's mother.

The ancient Egyptians considered the heart to be the most important organ. It was left intact in the body, as the dead person would need it to be weighed by Anubis.

Most of the other organs were discarded. The brain, for example, was not thought to be of any significance whatsoever. During mummification, the nasal membrane was pierced to gain access to the brain, which was then scrambled with a hooked stick, poured away when it was sufficiently mushy - then the skull cavity stuffed with sawdust.

A young French scholar, Jean-François Champollion (1790 - 1832), was the first to work out that the four heads on the Canopic jars were funerary gods. He thought the heads were those of a woman, baboon, hawk and jackal. Despite not being able to read the hieroglyphs on the jars until the decipherment of the Rosetta Stone, he was almost spot on.

The discovery of the Rosetta Stone in 1799 provided the key to deciphering hieroglyphs. Up until then, the symbols were thought to represent complete words. Champollion demonstrated in 1822, after many years of study, that some of the symbols represented consonants and others pairs of consonants.

Exactly a century later, an intact tomb was discovered containing breathtaking treasures. Scholars would argue, however, that the greatest prize was the knowledge we were able to glean from the culture's distant past, thanks to our ability to read the hieroglyphic script.

The most exceptional Canopic jars found to date are the four solid-gold miniature coffins which once held the organs of Pharaoh Tutankhamun, the 'boy king'. They were placed inside four larger calcite containers, carved in the shape of a pharaoh. The compartmented Canopic chest was inscribed on the outside with his name, titles and pharaonic deeds; on the inside were dedications to the protective goddesses, depicted in raised relief at each outside corner.

Experts now know that approximately 80 per cent of the contents of the borrowed tomb in which Tutankhamun was buried did not belong to him in his lifetime. However, thanks to the discovery of the Rosetta Stone and subsequent deciphered inscriptions, we at least know that the sacred jars which held his internal organs were his and his alone.