Alabaster Content from the guide to life, the universe and everything 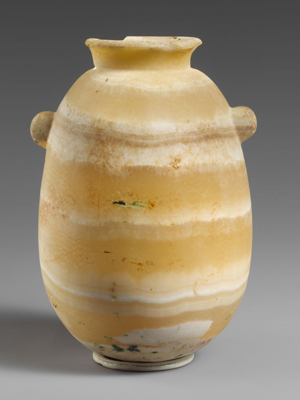 Many people associate the word alabaster with a milky whiteness, without being able to recognise the actual stone itself.

The original stone called alabaster, was a form of calcite (hydrated calcium carbonate). The ancient Egyptians used this alabaster to make small objects such as perfume bottles. It is debatable which came first, the word for these bottles alabastra, the name of the Egyptian town Alabastron or the word for the stone itself. This stone was harder than modern alabaster, counting as 3 on the Moh scale1. It was widely used in Egypt and ancient Greece, and is the alabaster referred to in the Bible. This stone is still mined in Egypt and also in Mexico and used in making beads and trinkets. Nowadays, it is more usually called onyx2 but Egyptian trinket sellers still call it alabaster.

The stone currently known as alabaster is a soft gypsum (hydrated calcium sulphate). It is normally a translucent white but various mineral traces may give other colours, including yellow, brown, grey and black. On the Moh scale of hardness (from 1 to 10) it counts as only 2 to 2.5 - this is soft enough to scratch with a fingernail. While very easy to carve and polish, it is also easily weathered, especially in wet conditions.

The first people to use large amounts of true alabaster were the Etruscans. These were a people who lived in northern central Italy, in what is now Tuscany and Umbria. Their settlement of Velathri (modern Volterra) was near a number of rich mineral deposits, including alabaster mines. By the 4th Century BC, this alabaster was being used for small objects of all kinds. Large numbers of funerary urns were made for burials. These urns were carved with a statue of the dead person on the lid, and a stylised scene of hunting or chariots on the side. In spite of the softness of the material, many of these urns have survived in a very well-preserved state to the present day.

Some parts of Britain have alabaster deposits, including Derbyshire and the coast of Somerset. The Italian mines near Volterra have a long history of alabaster production. This stone is worked by local craftspeople, as well as widely exported. The more translucent types of alabaster are popular in making lamps and screens, while all kinds are used for vases, ornaments and statuary. In more recent years however, the Spanish mines near the river Ebro have overtaken the Italian mines in quantity of production and taken over much of the export market in objects such as chandeliers and screens.

1The Moh scale is short for Measure of Hardness. It goes from 1 (for Talc) to 10 (for Diamond).2 The name onyx can also be used for a number of different types of stone, usually both translucent and marked in stripes or bands.