The Rosetta Stone Content from the guide to life, the universe and everything 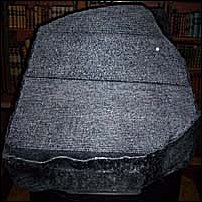 The Rosetta Stone is the world's oldest dictionary. Measuring 45" (1.1m) high by 28" (72cm) wide and 12" (30cm) thick, it was found by French soldiers in Rosetta (Rashid), Egypt in 1799. Until the Rosetta Stone was discovered, historians had been unable to decipher the hieroglyphs painted on Egyptian tomb walls, embossed on papyrus scrolls and engraved on the sarcophagi of royal (or very important) ancient Egyptians.

The three-quarters-of-a-tonne slab of rock, carved in 196 BC, is inscribed with a text on 100 lines1 in two languages: Greek and Egyptian, using three scripts: hieroglyphic, demotic Egyptian and ancient Greek. Hieroglyphic was the script used for important or religious documents, demotic2 was the common script of Egypt and Greek and was the spoken language of the rulers of Egypt. At the time of the discovery, neither the hieroglyphs nor the demotic writing could be understood by anyone living.

Egyptian antiquities, decorated with bizarre inscriptions, proved to be quite a puzzle for people who suspected it was an ancient language instead of the accepted 'picture writing'. In the 5th Century AD, hieroglyphs were no longer used, and the knowledge of how to write and read them was forgotten as the years passed.

The discovery of the Rosetta Stone provided the key to deciphering hieroglyphs. Up till then, the symbols were thought to represent complete words. A young French scholar, Jean-François Champollion (1790 - 1832), demonstrated in 1822 after many years of study that some of the symbols represented consonants and others pairs of consonants. For example, although it was first realised in 1752 that the pharaoh's name was enclosed within an oval cartouche3, Champollion was able to compare royal names already identified earlier by Greek scholars and made a breakthrough upon discovering that the sun disc (the first symbol in the name Ramses) represented the sound 'ra', after the sun god Rah.

Champollion was already well-versed in Coptic, the language early Egyptian Christians used for their rites. To say Champollion's access to the Rosetta Stone was restricted is a vast understatement, but he managed to obtain a copy of the Rosetta Stone inscriptions in 1808. When he studied it and found that Coptic was one of the languages, he realised that Coptic must be Ancient Egyptian, virtually unchanged since 3000 BC.

Champollion had to work from wax impressions of hieroglyphs from tombs which another archaeologist had managed to procure for him. Champollion was not a healthy man and he managed only one visit to the African country of his dreams in his lifetime.

What the Rosetta Stone Says

The text honours the coronation of the Egyptian pharaoh Ptolemy V Epiphanes (who ruled from 204 - 181BC). It lists all of the things that the pharaoh had done that were good for the priests and the people of Egypt. It was written by a group of priests in Egypt and it would have been carved by scribes.

When Napoleon was defeated, the Rosetta Stone, which had been discovered by his soldiers, became the property of the English under the terms of the Treaty of Alexandria (1801). The Rosetta Stone has been on display in the British Museum, London, since 1802 — except in 1917 - 1919, when the curators had been so concerned about heavy bombing that a new home was found for the priceless treasure in Holborn Tube station, safely stored 50 feet underground. In October 1972, in honour of the 150th anniversary of the decipherment of hieroglyphs, the Rosetta Stone was lent out to the Louvre Museum, Paris, where it went on display for a month.

The Rosetta Stone is one of five artefacts that Egyptian people would very much like to have returned to their homeland.

The five artefacts that Dr Hawass has requested the return of are:

The Rosetta Stone, unique in the annals of ancient history, can never be replaced and is therefore priceless. The artefact has its own display cabinet and is a very popular exhibit, attracting many thousands of visitors to the British Museum every year. Souvenir items like postcards, books full of its history and pictures, mousemats and even a printed silk scarf can be purchased from the museum shop. The tourist industry is big business and provides revenue which supports the museum's upkeep. There are currently no plans to return the Rosetta Stone to Egyptian custody, but in November, 2005 a replica was sent to Egypt.

The term Rosetta Stone has entered modern culture, meaning a key to solving a problem or providing a translation.

114 lines of hieroglyphs, 32 lines of demotic Egyptian and 54 lines of ancient Greek.2From the Greek word demotikos meaning 'popular'.3These were so-named from the French word for the paper rolls (or cartridges) used to hold gunpowder for muskets, as this is what the enclosures looked like.4Pharaoh Akhenaten's gold sarcophagus has been recovered and restored and is now on display in the Cairo Museum.