Constellations: Gemini 'the Twins' Content from the guide to life, the universe and everything 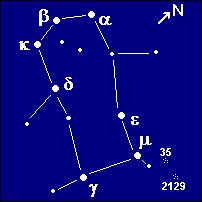 Gemini, the twins, is one of the 12 zodiacal constellations; it is found on the ecliptic2 north-east3 of Orion and is at its most prominent during the late winter months of January and February. Other pointers to locating Gemini are the prominent star Procyon in Canis Minor to the south, and Sirius (alpha Canis Majoris), the brightest star in the northern sky, even further south. Gemini is bounded by the zodiacal constellations of Cancer to the east and Taurus to the west.

The pairing of the two principal stars that form Gemini is mentioned in the culture of most early civilisations; the stars are nearly always associated with pairs or twins. The Anglo-Saxons knew them as 'ge Twisan', the Anglo-Normans as 'Frères', and in Germany they were known as 'Zwillinge'. Our perception today is from classical times with the association of Castor and Pollux from Greek mythology through the listing of the 48 constellations in Ptolemy's Almagest.

Castor and Pollux were the sons of Queen Leda, wife of King Tyndareus of Sparta. Castor was the son of Tyndareus and was mortal, but Pollux was the son of Zeus after a clandestine association with Leda on her wedding night, and as a result was endowed with immortality. Castor became famed as a horseman and Pollux as a pugilist. Together they shared many adventures and sailed with Jason as Argonauts in search of the Golden Fleece. Castor was killed in battle with his cousin Idas, and Pollux pleaded with Zeus to be allowed to share his immortality with him. Zeus, impressed by their brotherly love, granted the wish and placed them in the sky together.

Gemini's two principal stars Castor and Pollux mark the heads of the twins, with lesser magnitude stars in two lines stretching south-west and their feet firmly anchored in the edge of the Milky Way. In ancient times Castor was perceived as the brighter of the two, but now Pollux definitely outshines it. Consequently, the convention of classifying the brighter star with the Greek letter alpha has been reversed in this instance, with Castor, the lesser magnitude star, retaining the designation alpha. The two are separated by almost five degrees, with Castor being the more northerly of the two.

NGC 2392, the Eskimo Nebula, is a planetary nebula discovered in 1787 by William Herschel. It is three degrees south-west of delta Geminorum at Pollux's waist, and shows as a light blue disc in larger telescopes.

The Geminids occur in mid-December each year, peaking between 11 and 17 December with a rate up to 110 meteors per hour. Their origin is something of a mystery. The usual source of a meteor shower stems from the Earth passing through the debris trail left by a comet as their paths cross. The first noticeable occurrence of the Geminids shower was in 1862, but no comet was found that could be attributed as the source. For over a hundred years that situation remained until in 1983 NASA's IRAS4 satellite spotted a rocky body in the same orbit as the Geminids, which has now been named 3200 Phaethon.

It is by no means certain just what the several-kilometre-wide 3200 Phaethon is. At first it was thought to be an asteroid as the spectra of the Geminids indicate a rocky origin. Current theory postulates an extinct comet that is unable any longer to produce a 'tail' from solar heating when it passes close to the Sun. The volatile elements that boiled off on previous passes have been exhausted, leaving only the rocky parts of the comet remaining.

Some extrasolar planets have been discovered lying in the direction of Gemini. One, Thestias, which orbits the beta star Pollux, was first suspected as early as 1993 by Hatzes and Cochran, but it wasn't confirmed until 2006.

The Other Faces of Gemini

The name Gemini was used for the United States' 'Project Gemini' - a series of manned space flights into Earth orbit during the 1960s. In all, ten manned flights were flown between 1965 and 1966, with the name reflecting the two-man crews. Project Gemini was used to test the feasibility of long-term space flight and spacecraft systems as a forerunner to the Apollo lunar landing programme. Many of the Apollo astronauts, including Neil Armstrong and Buzz Aldrin, flew in Gemini spacecraft.

1Current IAU guidelines use a plus sign (+) for northern constellations and a minus sign (−) for southern ones.2The apparent path of the Sun through the sky.3Note that points of the compass work differently in the heavens; if north is at the top, east is to the left and west is to the right.4IRAS: Infra-Red Astronomy Satellite.5In 2006 Pluto lost its status as a planet when the International Astronomical Union (IAU) reclassified it as a 'minor planet'.