Nebulae - an Overview Content from the guide to life, the universe and everything 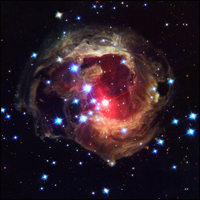 In a nutshell, nebulae (or nebulas) are dusty and gaseous clouds in outer space. Some are stellar nurseries; they create new stars from the remains of old, so are recycling on a cosmic scale. Others reflect starlight – lit by the ultraviolet emissions of nearby stars. Yet more are formed from the outer layer of hydrogen thrown off by a dying star, like a cosmic oyster shell enclosing a stellar pearl. Then there are the mysterious dark shapes which continue to perplex.

The technical definition of nebula is: 'A diffuse mass of interstellar dust or gas or both, visible as luminous patches or areas of darkness depending on the way the mass absorbs or reflects incident radiation.' They are usually made up mainly of hydrogen, though they also contain quantities of helium and tiny particles or grains of solid matter. These 'clouds' are barely visible from Earth, appearing fuzzy to our eyes even with the aid of binoculars and telescopes. The most famous naked-eye nebula is Orion's Nebula, also known as M42. It is located in the constellation of Orion the Hunter, situated just below 'the Belt'.

Nebulae may be hundreds of light years1 across and have a total mass of up to 1,000 times that of the Sun. The following are descriptions of three types of nebula: reflection, emission and dark.

Reflection nebulae, most simply described, are bluish clouds of dust and gas that are visible to us because they reflect the light of nearby stars. An example of a reflection nebula is IC 349 within the Pleiades star cluster in the constellation Taurus the Bull. Otherwise known as Barnard's Merope Nebula, it contains highly reflective dust particles and bounces back the light of nearby star Merope (23 Tauri) like a mirror. The stars in the Pleiades themselves were all born of the same nebula when it was much bigger. The remaining gases, known as 'nebulosity', are what remains of that long-gone nebula.

Typical emission nebulae glow red from the effect of ionised hydrogen gas which has been excited by the stellar wind2 of a nearby star or stars. Some emission nebulae are enigmatic works of art, like IC 405, also known as the Flaming Star Nebula, in the constellation Auriga the Charioteer. Then there are those with intriguing shapes, like IC 1805, the Heart Nebula feature of Cassiopeia the Boastful Queen.

The formation of the dark nebula itself is a mystery. Nebulas have no set form, and are constantly changing – a kind of creeping tentacle obliterating what lies beyond. Some, like the Doodad Dark Nebula in the constellation Musca the Fly, have been given appropriate names but aren't catalogued.

Perhaps the most famous example of a dark nebula is the Horsehead Nebula in Orion, which has its own h2g2 Entry. However, people in the Southern Hemisphere would probably disagree and declare it to be the Coalsack in Crux. Visible to the naked eye as a dark patch in the Milky Way, it was first documented by the Portuguese navigator Vincente Yanez Pinzon in 1499. Then there is Bernes 157, over 500 light years distant in Corona Australis, which is currently shaped like a boomerang!

A dark nebula inside an emission or reflection nebula appears in silhouette, which gives rise to some intriguing effects. The Horsehead Nebula so captivated Sir Patrick Moore that he wrote about it in his Observer's Book of Astronomy (1962). It is one of the top ten downloads at HubbleSite, a testament to its popularity.

A superimposed nebula pairing which gives a rather spine-chilling effect is NGC 1999; the dark nebula forms a kind of interstellar 'Kilroy was here'.

There are two further types of nebulae which are the expelled gases from stars near the end of their life: a planetary nebula and a supernova remnant. Both are shells of gas which were once the outer layer of the star; the main difference between them is the mass of the star concerned.

Planetary nebulae were initially named because they resembled a planet through less advanced telescopes. But they actually have nothing to do with planets. An example of a planetary nebula is IC 418, the Spirograph Nebula, a fabulous feature of the southern constellation Lepus the Hare. Our own Sun will become such a beautiful sight in about five billion years (no doubt with disastrous consequences for life on Earth, whatever form it takes at that time).

Most planetary nebulae measure less than one light year across, and some have amazing bipolar shapes which astronomers think is caused by two stars. An example of one such interesting nebula is the awesome Minkowski 2-9, also known as the Butterfly Nebula whose symmetrical output was captured for our delectation by the Hubble Space Telescope.

The longest planetary nebula (that we know of) is located in the constellation Carina the Hull. Henize 3-401 is also symmetrical like the Butterfly Nebula, but it is thought that its bipolar expulsion is due to the central star's magnetic field.

A supernova remnant is a gas shell moving away from a collapsed star at great speed, following a violent explosion known as a supernova. While a planetary nebula will often be regular and symmetrical-looking, with the dying star visible at the centre, a supernova remnant is irregular due to the violence of the explosion. The remains of the star will be an invisible neutron star or black hole. We know of several supernova remnants, most notably the Crab Nebula, also known as M1 and NGC 1952. One quite remarkable-looking supernova remnant is a pulsar wind nebula, which is only visible to us thanks to the Chandra X-ray Observatory. The 'Hand of God' (as it has been nicknamed) is the stellar matter which once belonged to a massive star, now a pulsar catalogued PSR B1509-58.

Some nebulae are interesting because they don't conform to the general rules most other nebulae observe. Take for example the Toby Jug Nebula, catalogued IC 2220. It's a bipolar and biconical reflection nebula surrounding the irregular variable red giant star V341 Carinae. So why is this particular nebula yellow? Some astronomers think it is made up of different gases like sulphur, so it's probably a good thing that we can't smell it.

You may occasionally see references in old astronomy books to 'spiral nebulae'. Less than a century ago, astronomers thought so-called 'spiral nebulae' were components of our own Milky Way galaxy. It took the Shapley-Curtis debate of 1920 to bring matters to a head, although both eminent scientists disagreed on basic fundamental principles. The argument was settled in 1924 when Edwin Hubble studied Cepheid variable stars3 in the Andromeda spiral nebula4  – eventually proving beyond all doubt that 'spiral nebulae' are distant galaxies just like our own.

Seeing the Nebulae in Close-up

With technological advancements like the Hubble Space Telescope, we are able to see fantastic sights merely dreamed of by our forebears and astronomy pioneers like Williamina Fleming, Sir William Herschel, Tycho Brahe and Jeremiah Horrocks. What would they have said if they could have seen such glories that we are lucky enough to witness today?

1A light year is the distance light travels in one year, roughly 5.88 trillion miles or 9.46 trillion km.2A stream of atomic particles which have reached high-enough temperatures to escape the star's surface.3Cepheid variables are like cosmic lighthouses: the magnitude of these stars changes over a constant period. By measuring the star's brightness and its period of variation, its distance can be calculated.4Now known as the Andromeda Galaxy.