Binoculars Content from the guide to life, the universe and everything 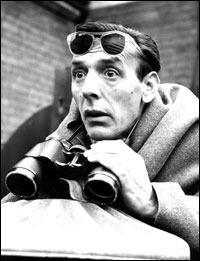 Whether you want to do some serious birdwatching, look at the stars or just keep a close eye on your child's egg-and-spoon race at the local sports day, binoculars are a useful thing to have. But they come in a confusing range of different sizes and prices. Which set is best for you? Read on...

First things first, binoculars are like trousers or scissors. You can say 'binoculars' or 'a pair of binoculars', but you can't have 'one binocular'.

Simply put, binoculars consist of two tubes, both of which have a lens at each end. The small lenses that you look into are called the 'eyepieces'. The big lenses at the other end of the binoculars are called the 'objective lenses'.

In between the lenses is a complicated set of mirrors and other lenses which you never see. Rather than using silvered mirrors, which would absorb some light and reduce the brightness of the image, binoculars use prisms. These are blocks of very clear glass with three polished flat faces. The light enters one face of the prism, hits the opposite face at an angle of 45° and is reflected off it in a phenomenon called 'total internal reflection', where 100% of the light is reflected. It then strikes the third face at 45° and is again reflected, back through the first face. By now the light has been turned by 180°. These prisms are used to allow the light to travel up and down the length of the binoculars a few times, so that they behave like a much longer telescope.

Binoculars have a hinge in the middle which allows you to set the distance between the eyepieces to match the distance between your eyes. This is very important to prevent eye strain and headaches. When the spacing is set correctly, you should see a single round image, not the 'figure-of-eight on its side' image that is used in cartoons and movies to represent a view through binoculars.

Almost all binoculars have a system for focussing. A good pair will be able to focus on things from about 20 feet away all the way to distant objects which are said to be 'at infinity'. There should also be an adjustment on one eyepiece so that one eye can be focussed independently of the other. This is necessary because not everybody has perfect eyesight and one eye generally sees better than the other. To set a pair of binoculars to match your eyes, proceed as follows:

Once you have set the eyepiece, you won't have to adjust it again unless someone else uses the binoculars and changes the setting. All focussing can be done using the main focus control.

The first number is the magnification. This is the number of times bigger (or closer) an object will appear when seen through the binoculars. Normal binoculars come in a range of sizes from seven up to about 16. You might think that the magnification should be as big as possible, but there are a few problems with high magnification which will be discussed later.

The second number is the objective size, that is, the diameter of the objective lens in millimetres. The bigger this number is, the more light the binoculars will gather, so the brighter the image will be.

Choosing the Right Combination of Magnification and Objective

Which magnification you choose when buying a pair of binoculars depends on what you want to do with them. Bear in mind that the bigger the magnification, the more you will notice any vibration in your hands. Above a magnification of 16, it is virtually impossible to hold them steady and a tripod will be needed.

Having chosen the magnification, you should now choose the objective size:

These can be summarised as follows:

The higher the magnification and the larger the objective lenses, the heavier the binoculars tend to be. Try them out before buying and make sure that you'll be able to carry them without too much effort. Remember, what seems light in the shop might seem heavy after lugging it across miles of moorland to your favourite birdwatching spot!

A useful test that everything inside your binoculars is in order is to focus on a distant horizontal line such as the top of a wall. Shut one eye and look at the image through the other eye. Then swap eyes. Does the image of the wall stay where it is, or does it jump up and down as you swap from one eye to the other? If the image appears to move, then it is likely that something is out of alignment. This will cause you a lot of eye strain. You should try a different pair. If you've bought the binoculars by mail order, consider returning them.

Choose coated lenses if you can afford them. These have a special surface on the lens which lets through more light, making the image brighter. If in doubt, try them out and see if they add a lot to the quality of the image.

Binoculars come in a number of different shapes. In general, the compact ones are more expensive than bulkier ones of the same power. Roof prism binoculars use a complicated arrangement inside to make them look like two cylinders. The more old-fashioned Porro prism binoculars with their characteristic chunky shape don't look as cool and take up more space, but they can be a lot cheaper.

Most binoculars are not suitable for use with glasses (spectacles). You have to put your eye close to the eyepiece, but the glasses prevent you from getting close enough. You can of course take your glasses off to use the binoculars, but this can be a nuisance. It is possible to buy special binoculars which can be used with glasses. These have a slightly different construction inside which allows your eye to be further from the eyepiece. These will always be advertised as 'suitable for use with glasses'. You should still try them out to see that you find them acceptable.

It is possible to buy fixed focus binoculars, also known as 'focus free'. These have been set in the factory to focus on a distant point and have no way of changing the focus. They rely on the flexibility of your eye to keep the image clear. While this is not a problem for children and young adults, the eye loses its ability to focus with age and for anyone over about 40, these binoculars will produce a lot of eye strain.

For the theatre or opera goer, a special sort of binoculars called 'opera glasses' are available. These have low magnification, usually three or four and with small objective lenses, making them very compact and light. Since the stage is very brightly lit, the normal rules don't apply. When choosing opera glasses, don't worry about fancy features - just check that you can see clearly through them.

Complex design allows zoom binoculars to change magnification, typically from about eight to about 20. This is great for general daytime use, but the extra workings inside reduce the amount of light available, making them unsuitable for work in dim light or at night.

For a good set of binoculars, you'll have to pay good money, but with these guidelines you should be able to choose a pair just right for you.